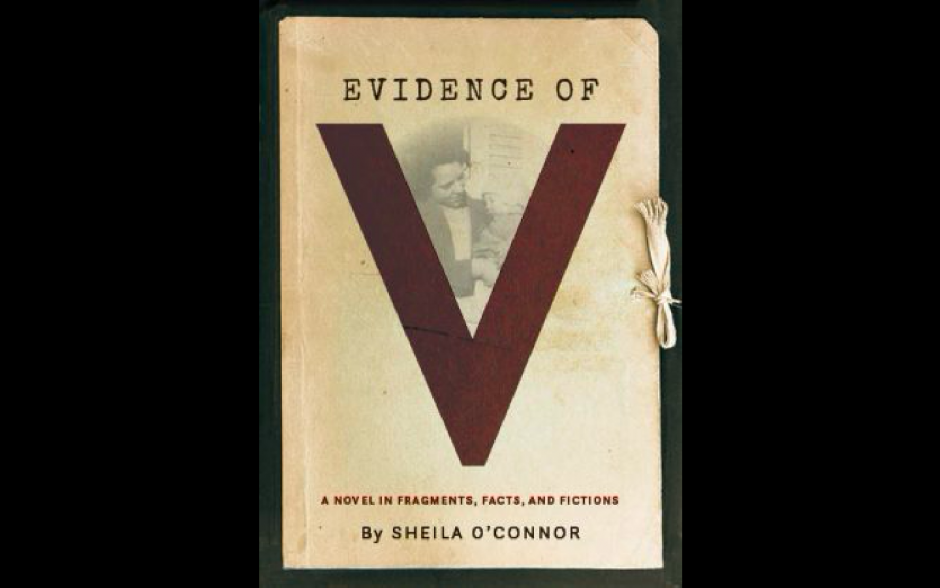 In her novel Evidence of V: A Novel in Fragments, Facts, and Fictions, Sheila O’Connor pieces together the true story of her maternal grandmother, V, a woman whose existence was a family secret. O’Connor’s mother, June, was adopted by V’s sister, and O’Connor did not know about V until she was sixteen years old. Working from incomplete information, O’Connor colors in the spaces between the facts, transforming V from a name on court documents into an effervescent, audacious girl. In the process, O’Connor tells an affecting story not just about the injustices V and other young women like her suffered, but about what it means for someone to be family, and how a person’s influence reaches through generations.

In 1935, fifteen-year-old V lives in Minneapolis and spends her nights singing at the Cascade Club. She dreams of stardom and tallies the evidence that her boss, Mr. C, with whom she’s been having an affair, is in love with her. But when she gets pregnant, V is sentenced to the Minnesota Home School for Girls at Sauk Centre until the age of twenty-one. Her time at Sauk Centre is supposed to teach her the moral principles that will turn her into an ideal homemaker. Instead, she and the other girls at Sauk Centre are treated like criminals; they are subjected to humiliating punishments and are unable to send uncensored letters to their families back home. V does her best not to allow her experiences at Sauk Centre to break her, even as she finds herself injured at every turn.

O’Connor practices careful economy with words. The white spaces on the page mirror the blank spots in V’s story. Stitching together facts and fiction to create a vivid portrait of the girl V might have been, O’Connor deftly communicates the sense of guessing at the truth, of imagining what the missing pieces of V’s life might have looked like. “The truth was always missing,” O’Connor writes, “…Because there is no truth…Because we are living in V’s white space where very little can be known” (6).

V’s story takes place in the margins—in the places where the truth is impossible to recover. The real V is gone. All that she’s left behind is clues about who she might have been in the form of the paper trail that follows her—a note in June’s adoption papers that reads “V intends to keep her baby” and a record in Sauk Centre’s ledger that says “V escaped parole” hint at the turmoil V endured and at her tenacity through it all—and in the traits she might have passed on to her daughter and granddaughter (134, 224). “Why doubt V’s compliance at the school?” O’Connor wonders. “An inherited distrust of institutions? My own adolescent refusal to conform…Or…June’s pathological aversion to homemaking, a loathing I imagine young V shared” (171-172).

The unknowable parts of V’s history reverberate through the lives of O’Connor and her mother. On the drive from Sauk Centre to Minneapolis after June is taken from V, Mr. C tells V’s sister, “Babies cry. Eventually they quit” (142). “Eventually,” O’Connor observes, “June claims she cannot cry…A heart of stone, June likes to tell us as a joke. But exactly why she has it, June can’t answer. The question is the mystery of June” (142-143). O’Connor skillfully illustrates the lasting impact our family members leave on us—even the ones we never knew. Although she’s gone, V’s story continues in the lives of her daughter and her grandchildren. “Generation after generation,” O’Connor writes, “we are walking through V’s snow” (243).

Honorah Creagh is the Literature Barista at the Fictional Café.

Sheila O’Connor is the author of six award-winning novels for adults and young people. Her books include Where No Gods Came, winner of the Minnesota Book Award and the Michigan Prize for Literary Fiction, and Sparrow Road, winner of the International Reading Award. Her novels have been included on Best Books of the Year lists by Booklist, VOYA, Book Page, and the Chicago Public Library, among others. O’Connor received her MFA in Poetry from the University of Iowa Writers’ Workshop, and her work across genres has been recognized with the Loft Literary Center’s McKnight Fellowship, two Bush Artist Fellowships, and several Artist Initiative grants from the Minnesota State Arts Board. She is a professor in the Creative Writing Programs at Hamline University in St. Paul, Minnesota, where she serves as fiction editor for Water~Stone Review. Visit her website here.  You can purchase Evidence of V: A Novel in Fragments, Facts, and Fictions via the publisher’s website, Rose Metal Press. This is Sheila’s first appearance on the Fictional Café.