Editor’s Note: This is a chapter from Dante’s Angels, a novel in progress. 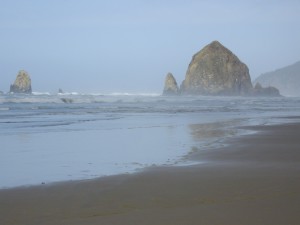 David’s hands were shaking as he steered the 1996 blue Chevy into the hotel’s circular driveway. He mopped his forehead with a plaid handkerchief and stuffed it back in his shirt pocket. “See. No problem getting here. I told you so.”

Estelle kept her mouth shut. The ninety-minute trip from Beaverton to Cannon Beach had taken three hours. The line of cars behind them often extended into the horizon.

Estelle looked around. She could see the water, and the top of Haystack Rock. “I can’t believe we’re really doing this.”

“Why not? Everyone else goes on vacation. Getting away for a long weekend is just what we needed. I just hope you packed everything this time. Did you remember my pajamas?”

“And my tan slacks?”

“And all our medication?”

A young man in uniform greeted them. “Valet parking?”

David nodded, handing him a five-dollar bill as he hauled himself out of the car.

Their luggage, consisting of one large suitcase and one small travel bag, was placed on a luggage cart by a hotel porter. David parted with another five dollars when the man escorted them to their suite and placed the luggage on top of the king-sized bed. When he left, David and Estelle stared at their luxurious new surroundings.

“Wow,” whispered Estelle. “This is a really beautiful room. Are you sure we can afford it?”

“For our 52nd anniversary? Why not!” He smiled broadly, puffing out his chest with great pride. He glanced at the mirror and slicked back the thinning circle of white hair that fringed his head. “I am now going to be indisposed for a few minutes,” he announced as he picked up a complimentary newspaper from the nightstand and headed toward the bathroom. “Why don’t you start unpacking? And I really do hope you didn’t forget anything this time,” he repeated as he disappeared behind the door.

Estelle drew back the curtains and walked onto a large balcony overlooking the ocean. The sun was shining, the air smelled sweet. It was wonderful. After a few minutes she went inside again, inspecting the refrigerator, the coffee maker and the television. All in working order. Nothing would spoil this weekend. It was perfect. Then she opened the lid of her suitcase and out jumped the cat.

“Oh God!” Her hands flew across her mouth to stifle the scream that had already escaped.

“Something wrong?” David’s gravelly voice careened through the closed door.

“No dear,” she squeaked, three octaves above normal.

“No…  In fact, we may even have more than we need.” Estelle bit her lip.

“If you say so. I’ll be awhile. You okay to keep unpacking?”

Estelle looked around the room for the huge grey animal. “Daisy. Daisy. Here girl,” she whispered. But the cat was gone.

Estelle spun around. Daisy had bolted out to the balcony, jumped up on the narrow handrail and was staring down at the beach, six stories below, where a flock of seagulls had just landed.

What am I going to do, she wondered. She tiptoed onto the balcony, slowly extending her hands toward the back end of the cat, but before she was able to grab her, Daisy leaped onto the outdoor lounge and bounded into the room again. Estelle checked the cushion where Daisy had landed. Only one pulled thread. Maybe no one would notice. She flipped the cushion over. Thank goodness it was reversible.

David walked out of the bathroom to find his wife on the floor, bum up waving at him.

“What the heck are you doing, Estelle? Did you fall?”

Estelle pulled her head out from under the bed, made a half turn, and flopped into a sitting position. “Um, no. I – I was just looking for…an earring.”

“Well, you have two of them on. How many were you wearing?”

Estelle reached for her ears. “Oh, silly me,” she said. “I thought I had dropped it.”

“I think you’re losing it, Estelle. I mean, you’re only 78. I’m 82 and my brain is supposed to turn to mush before yours, but I think you’re winning the race, dear. Can I help you up?”

David reached down and helped Estelle to her feet.

“This is supposed to be our luxurious getaway weekend. Breakfast in bed, room service, maid service, fancy stuff. You’re not supposed to lift a finger. Just what you wanted, I thought. Instead you look sick as a dog. Are you coming down with something?”

Estelle sat on the edge of the bed. Her face was flushed. David put his hand on her forehead checking for a fever.

“I think some fresh air will do you good. Forget the unpacking.” He stared at the suitcase, still brimming with clothes. “Just come on down to the beach with me and we’ll take a little stroll along the water’s edge. Kinda like we did in the old days.” His eyes were smiling.

David’s smile turned to a frown. “Why not?”

“I — I’m just not feeling right. I think I would like to lie down for a few minutes. I’m sure it will pass. Why don’t you go without me? For about an hour or so. I’m sure I will feel better in an hour. Or so.”

David sighed deeply, shrugging his shoulders. “Okay, but this is a hell of a way to start a second honeymoon. I really thought we’d get off to a better start this time.”

As soon as David left the room, Estelle ran into the bathroom and splashed cold water on her face. “Now think, old girl, just think. What to do.” She took a deep breath and squared her shoulders. “First thing…” She spoke out loud. “Find the cat.” It turned out that Daisy was curled up on a goose down pillow on the top shelf of the closet. With the pointy end of a wooden hanger she tried to poke the beast, but Daisy only moved further back on the shelf and resumed her nap.

“Okay, Plan B,” she muttered. Got to provide for the stupid animal. She reached for the telephone and called the front desk.

“Yes. This is … Miss Smith, in room ….205. I have a hypothetical question. By any chance are pets allowed in this hotel?”

“Absolutely not, ma’am. Under no circumstances are any animals allowed in this facility. In fact, we advertise as a hypoallergenic environment. Unless of course it is a service dog, in which case only specific rooms are designated.”

“Have you ever booked any service cats?”

Estelle exchanged her leather shoes for sandals, buckled them tightly, put the “Do Not Disturb” sign on the door, and made a beeline for the gift shop on the main level. She went directly to the woman behind the counter.

“I was wondering if you could help me, please.”

“Of course, what do you need?”

“Well, my husband and I have just purchased a few beautiful plants from the florist, and I was hoping to find a box to put them in. You know, something you might be discarding. We could put the plants in the box and I wouldn’t be afraid of watering them, in case they leaked, you know, so it wouldn’t spoil the carpet.”

The saleswoman smiled pleasantly and disappeared into the back of the store. She returned carrying an empty 18×24-inch cardboard box labeled Perfecto Condoms. “Will this do?”

“Anything else I can help you with?”

The saleswoman never batted an eye. She gave all the supplies to Estelle, who paid in cash, turned, and scrambled back up to her room, loot in hand.

Estelle checked her watch. There was only a half hour left until David would return. She would have to move fast. She cleared a space on the floor of the closet and shoved the box in the corner. She put several layers of paper towels down to the right corner of the box, and placed the matching decorative bowls on top. Then she opened one packet of tuna fish, which she dumped in the first bowl on top of the $10.99 sticker, and filled the matching bowl with water.

“Kitty litter…and we’re done. Come on, old girl, you can do this,” she whispered. She checked on Daisy, who had rolled onto her back and was sleeping spread eagle on the goose down pillow, snoring lightly. Then she grabbed several plastic bags and left the room, again finding her way down to the beach. The sun was very bright. She had forgotten both her sunscreen and her hat. Perspiration rolled down her face.

By the time Estelle found an isolated area she was exhausted. She sat down in the sand, sniffled a few times, and using her freshly manicured nails began scooping sand into the bags. Halfway through filling the second bag, a shadow enveloped her. Estelle looked up and squinted into David’s face.”

“What are you doing?”

Estelle shook her head. “I can’t tell you.”

“I haven’t killed you yet. In spite of 52 years of temptation. What makes you think I’d start now?”

She shrugged. “This is a new one.”

“Ten kids, a dozen Chihuahuas, a house fire, and all the rest. What could be new?”

“You bought a kitten?”

She tilted her head and gave him a dirty look. “I have no idea how she managed to get into the suitcase.”

David stared at his wife for several minutes and then gazed at the ocean. It was truly a gorgeous day.

“If I sit down in the sand next to you I’ll never get up again. How about we find some place more comfortable and talk this over.”

Estelle reached up and David grabbed her hand. With a little effort she managed to get balanced on her feet again. They walked over to the pool area and sat at a table under a large beach umbrella.

A waitress from the poolside bar came over and they ordered a carafe of wine.

David looked at the two bags of sand in front of him. “Kitty litter, huh?”

Estelle nodded. “I already have the litter box set up.”

“You’re not too angry? I mean, we can’t let anyone in the room or they’ll kick all three of us out. No maid service, or room service, or fresh towels.”

“We’ll work it out, Estelle, like we always do.” His eyes smiled as he took her hands in his. “I just find it amazing that after 52 years of marriage you can still surprise the hell outta’ me.”

Then he reached over and planted a small kiss on her cheek. “Happy anniversary, Estelle.”

They lifted their wine glasses for a toast.

“May the adventures continue for another year,” said David, grinning from ear to ear.

Diana Kay Lubarsky moved to from New York to Oregon in 2005.  She was a physical therapist for 46 years, a sculptor for 35 years, (www.Holocaustimages.com)  and since retirement, has turned her attention to writing. Her current project is a book-length collection of short stories called Dante’s Angels, a sweet and sad reflection about five old Jewish ladies who meet in Oregon and become each other’s support system while facing the challenges of life in their senior years.