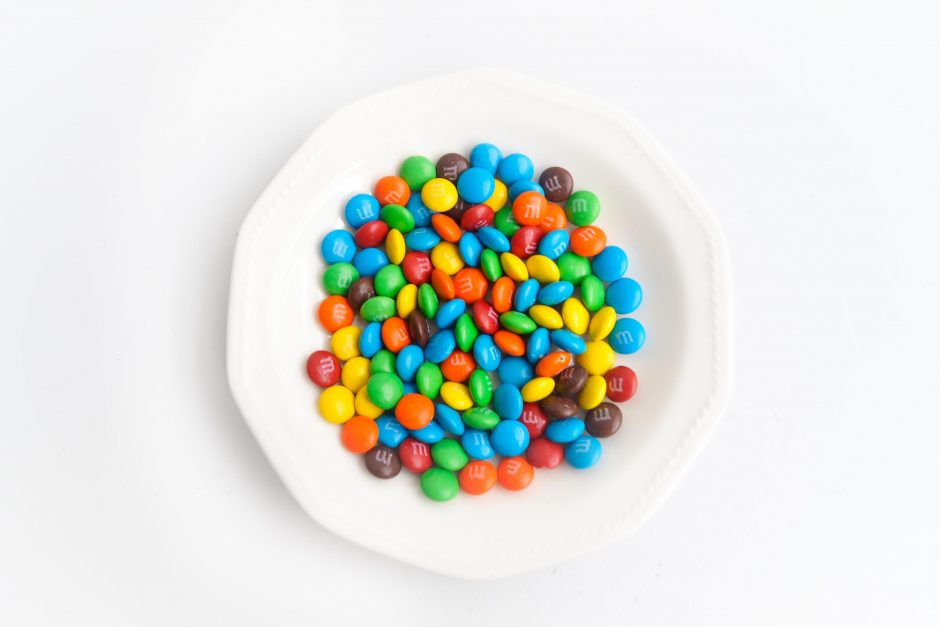 Dottie looked past her reflection in the bathroom mirror to the metallic petals outlining her slight frame. She’d found the vinyl-coated wallpaper in W.T. Grants on Washington Street that Wednesday and had spent half of Thursday hanging it. Looking back to the mirror, she folded the final curler into her hair and snapped it shut. She then began her nightly routine of wrapping toilet paper around the circumference of her head to keep her cropped, platinum hair smooth around each bubblegum pink foam roller. She had thought the yellow and orange flowers traced in gold were just the springy boost the tiny bath needed, but now she wasn’t sure.

“George? Hey, George?” she called into the hallway.

“George, do you like the new wallpaper in the bathroom?”

“I told you I did,” he declared before stuffing a handful of M&Ms into his mouth. He chewed once, and swallowed the candy almost whole. “It really brightens things up.”

George shuffled the two feet across the hallway to the bathroom and popped his head in. His eyes met Dottie’s in the mirror. “Shoulda thought of that before you bought it, huh, Shithead?” He bawled over, laughing at his own joke.

“You know this is the only way to keep my hair from going frizzy, George,” Dottie yelled in frustration. “I don’t know. I’ll look at the wallpaper again tomorrow. Let’s go to bed. And stop eating outta the candy dish at night. It’s bad for your digestion.”

George and Dottie walked past the entryway and through the living room to the bedroom, where one-year-old Mary slept in her crib. They slipped carefully under the blanket and sheet so as not to wake her. George fell like a boulder into an unshakeable slumber, and Dottie drifted in and out of a dream like waves as she ran through her to do list for the following day.

The clock read 12:13 am when Dottie found herself sitting upright in bed. Mary was wailing. A rustling stirred in the darkness to Dottie’s right. Without a thought, she grabbed her hairbrush off the nightstand and hurled it in the direction of the clamor.

“Whad’ya do that for?” George yelled.

“George! What on Earth are you doing waking Mary up like that?” She sped to the crib and swept the baby into her arms.

“You hear that, Dottie?”

“The sound of a crazy man putting his pants on in the middle of the night?”

“Not that. It’s the sirens. There’s a fire. I’m gonna go down and check it out.” George rubbed his hands together in anticipation as he scanned the dim room for his belt.

“George, you’re being ridicawlus. Look, you made the baby cry.”

But, George could not be swayed. He lifted his jacket off the armchair in the living room on his way to the door.

“You shoulda been a fireman, George” she called after him.

Once George had  gone, Dottie took the crying baby to the kitchen where she offered her a bottle. Mary refused it, so Dottie tried pacing. She bounced Mary through the kitchen and back into the living room. The crying stopped but resumed shortly. “Wah.” Mary’s bloated cheeks reddened until they resembled the potatoes Dottie made for dinner that day.

Suddenly, the room lit up. A white light crossed the parlor from the carpeting to the plaid sofa. Dottie stretched her neck to peer out the window at the street below. The headlights belonged to a black Cadillac. Still coddling Mary, she crouched beneath the sill and watched as Jimmy, the building’s super, helped a woman out of the luminescent car.

Dottie thought Jimmy was friendly enough. He took his time coming around to fix things but always showed up eventually, emitting an odor she surmised was a mix of bourbon and Pall Malls.

Keeping her head low so Jimmy wouldn’t think she was snooping, Dottie watched as he draped the mystery woman’s arm around his neck and led her limp body out of the car, her feet dragging as he carried her down the sidewalk. They disappeared under the fire escape at the front of the building.

An uneasy feeling came over Dottie. What was Jimmy bringing a strange woman home for? She was clearly inebriated; too drunk to know where she was or who she was with. Dottie bounced Mary higher and higher as she paced, shaking her head.

When the idea came to her, Dottie carried Mary, still crying, back to the bedroom and placed her gently into the bassinet. She then marched back to the kitchen, where she lifted the receiver from its base and rested it against her cheek. She dialed, placed her hand over the mouthpiece, and waited.

After several rings, she heard a snap and then static. “Hello?” Jimmy’s gruff voice shot through the line. Frozen, Dottie’s chest momentarily ceased to rise and fall. After waiting two full beats, she gently returned the receiver to its base. Her slippers grazed the carpet as she hurried back down the hall to the bedroom, where she was relieved to find Mary murmuring softly in her bassinet.

Dottie paced the length of the living room, occasionally peering out the window onto the dark sidewalk. “What would George do if he hadn’t run off,” she wondered aloud.

Back in the kitchen, she lifted the receiver again. “Yes?” Jimmy’s concern was apparent. Dottie hung up quickly this time but didn’t wait long before dialing a third time and then a fourth. On the fifth try, Jimmy howled, “Now, listen here. I don’t know who this is, but if you have something to say, come out with it! I’m going to find you and you’re going to get the beating of your life!” This time, Jimmy hung up first.

Dottie recoiled. She covered her mouth with her hand and sat frozen at the kitchen table until she heard a rattling from the street below. She tiptoed back to the living room and crouched again beneath the window sill. The iron door at the building’s entrance swung carelessly behind Jimmy, who waddled toward the curb, the mystery woman propped onto his hip. A black car, like the one they’d arrived in, pulled up and the woman was hoisted, still unconscious, into the backseat. Jimmy motioned to the driver and the car rolled away.

Dottie tipped the M&M bag over the candy dish as the dimming sunlight landed on the kitchen counter.   The potatoes rustled in boiling water nearby. Her feet were sore from walking up and down First Street and then Washington in heels behind the large baby pram for three hours that day. George didn’t understand how two errands could take so damn long, but walking the mile square of Hoboken on Sundays was her weekly exercise. His slacks were pressed and hung on the bedroom door, and a fresh loaf of bread had been sliced and  arranged on a paper plate in the middle of the table. It had been a productive Sunday that even included an envious scowl from Mrs. Murphy.

Dottie lifted the lid from the pot and scattered salt over the potatoes. She thought about how George had depleted the candy when he finally burst into the apartment late the night before raving about the fire.

“Dottie, you wouldn’t believe it,” he’d said. “There were eight firemen and they just couldn’t put it out. They tried everything.”

“George, would you keep your voice down! You don’t know how long it took me to get Mary back to sleep.”

George hushed his voice to a whisper, “Well, they got everyone out so no one was trapped inside.”

“How was your night, Shithead?” He chuckled.

“Uneventful. Now be quiet and put the candy back in the kitchen.”

Dottie plunged a fork into a potato. It was done. She began to drain the water when a rapid thumping on the apartment door startled her.

“Coming,” Dottie called, bounding toward the door. Through the peephole, she could see the collar of his flannel shirt and his receding hairline. She took a breath before pulling the door back no more than a few inches. “Oh, hello, Jimmy. What can I do for you?” Dottie forced a smile.

“Hiya, Dottie,” Jimmy began. “Someone was prank calling me last night.” His eyes narrowed, enlarging the circles beneath them. Dottie wondered briefly if there was time to quickly shut the door and hook the chain, but she froze as Jimmy’s hand slowly reached toward her.

“I had to get a new number,” he stammered. Her eyes widened as Jimmy’s hand stretched open, revealing a scrap of paper. “Anyway, I want you to have it.”

Reluctantly, Dottie accepted the scrap, forcing another smile “Okay. Thank you, Jimmy.” Jimmy nodded and headed back down the hall. She shut the door, turned the lock, and pressed her back against the wall as she examined the paper.

“Who was that?” George called from the bedroom, where he’d been playing with Mary.

“Oh, no one. Wrong apartment, dear,” she answered. “Dinner’s ready.”

Kerry Breen is a writer living in Jersey City. She writes content for a bank by day and short stories to share with her beloved writing group by night. She skis, does yoga, and occasionally runs. Well, if we’re being honest, she’s more of a jogger. She very much enjoys making to do lists and checking things off.