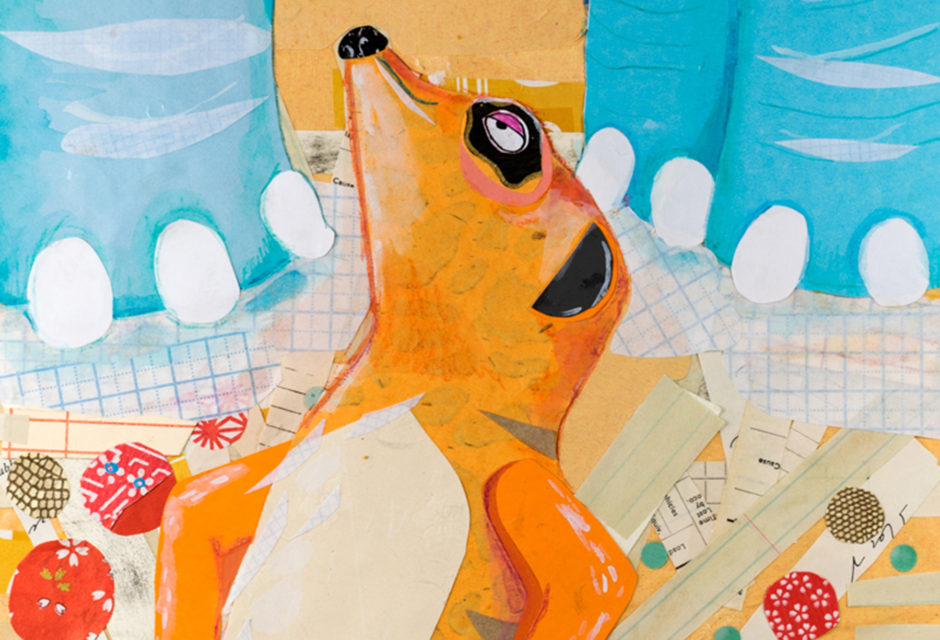 Editor’s Note: This is our first installment of our Children’s Literature Issue – a short story about a baby boy in the wild and the animals who find him. Illustrations by Fuzz. E. Grant.

It was the hottest part of a hot summer day in the Maru grasslands when Mother Nia, the matriarch of the elephant pack, woke from her afternoon nap, yawned, and stretched her trunk to the sky. Father Idir lay on his side and his young son, Oluchi lay facing him, his trunk tucked into Father’s giant chest. “Wake!” said Mother Nia, “It is time to go to the watering-hole!” She prodded and poked him and his twin sister while her eldest girl waited impatiently. Meanwhile, the baby of the family lay dozing. Nia pretended not to see him there, for she coddled baby Oyibo, who had been born a milky white color and was therefore laughed at and pitied by the animals in the grasslands where they lived.

She was about to wake him when two black eyes popped out of a little hole in the ground and said “Many joyful greetings for a fruitful afternoon, Great Nia! I honor thee in thy wisdom and sagacity, Wise Matriarch of the Maru!” And he tucked his slender body down into an obsequious bow, his golden head nearly touching the ground.

It was the meerkat, Paki – the trickster. All the elephants of Tanzania are wary of Paki because he runs about spying, spinning yarns, and eating the scraps of the jungle-cat’s kill that even Zare, the vulture, will not touch. 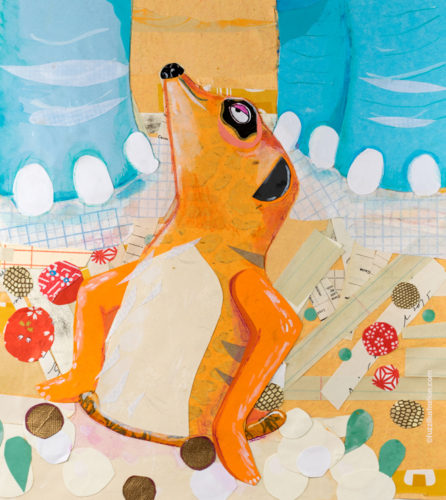 “Great Mother!” responded Paki, regaining his balance after such a deep bow. “Pray, tell me, in the sky above or the ground about you, do you see anyone that might threaten the helpless and simple-minded Paki?”

And as was their habit, Mother Nia assured Pak,i that no great eagles circled above nor hungry snakes slithered about the elephant camp.

“Beautiful One, my forever thanks to you,” responded Paki, and scuttled a few feet from his burrow, joining the elephant family on their walk to the watering-hole. “How beautiful is the sun and sky! How abundant the trees and grasslands! How still and calm is your domain. Indeed, indeed, we have nothing to fear today.”

Now, Paki knew as well as anyone else that there is nothing so unlucky as to remark upon the peacefulness and bounty of the day. It pleased him to see Mother Nia and Father Idir look uncomfortable.

Paki sat still, rejoicing in the mischief he had made, and then he said spitefully: “Kifaru, the Big One, has grown weary of the Roun. He will drink at our watering-hole for the next moon, so he has told me.”

Kifaru was the enormous black rhino who lived near the Roun River, twenty miles away.

“He has no right!” Mother Nia began angrily – “by the laws of The Maru, he has no right to change his quarters without due warning. He will bully our young and jeer at our enemies, angering them and putting our children at risk.”

“His brothers do not call him The Dark One for nothing,” said Father Idir quietly. “Since humans shot his mother and robbed her of her tusk, he has been wounded as much in his heart and his mind. And this wound he seeks to inflict on all around him, disturbing the bonds that unite us against those who would have our blood. Indeed, when the first child among us falls to the blood-lovers this season, we shall have Kifaru to thank!”

‘Shall I tell him of your gratitude?” said Paki.

“Go!” snapped Mother Nia. “Return to your burrow and go hungry this afternoon! You have done enough harm for today!”

“I go,” said Paki quietly. “You can hear Kifaru at the watering-hole now. I think I might have saved myself the message, and eaten lunch after all,” sulked Paki, regretting his impulsiveness.

The pack walked slowly to the watering-hole, and all the way Mother Nia and her family heard the angry grunts of Kifaru, ill-tempered from the long walk across the forests and grasslands and eager to assert himself. He pushed his way in between the Dik Dik, scattering them like so many feathers, and kicked a baby elephant with his massive leg until she howled and cried. “Make way for my master!” cried Jengo, the large white bird who was forever grooming Kifaru and riding on his massive back.

But soon quiet fell over the watering-hole, for everyone was thirsty in the heat of the mid-day sun. As Mother Nia drank she gave gratitude for the water and for the safety of her children, as was her habit at this time of day. Her reflections were stopped short, however, by a sound as strange to her as the call of fairies or elves would be to you and me.

“Ga! Ga! Ha! Ha Ha!”Directly in front of her, floating and spinning slowly in a basket of reeds, lay a naked baby girl cooing and playing with a bright blue stone. The soft and dimpled infant was lightly absorbed in her play, pausing only to look wide-eyed at Mother Nia and laugh. Nia blinked, for she had never seen anything so wondrous.

But Kifaru had spotted the infant. Flashing with anger the great rhino roared, then swiftly lunged toward her. “Charge!!” cried Jengo, mercilessly. The rhino bowed his head and thrust forward. The basket was swept out beneath the baby girl and she was plunged into the water’s depths.

Kifaru bore his great head down on the infant, smothering her underwater. “Drown it!” Jengo shrieked. But all at once Mother Nia thrust her long trunk underwater and skillfully swept the crying, sputtering infant to safety. She curled her trunk securely around the girl and nestled her into her lap, stroking her and comforting her as well as any mother of four children. The baby girl clutched Mother Nia tightly, but soon her sobbing subsided, and before long she loosened her grip and stood up, smiling, and gazed into Nia’s eyes. “How little! How naked, and – how bold!” said Mother Nia softly. 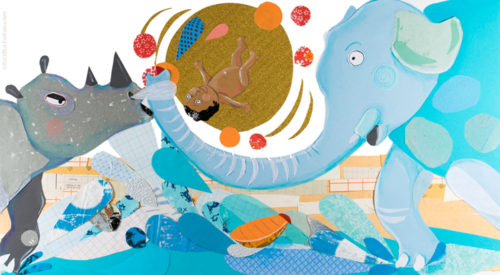 The rest of the elephant herd had gathered around in a show of solidarity, and now looked curiously at the round little baby who was tenderly tugging at Mother Nia’s trunk, saying “Ma ma! Ma ma!” and smiling broadly. Obiyo reached over and tickled her ribs, and the girl dropped to the ground in an explosion of giggles so wild and free that even the most wizened of the herd felt a twinge of awe and love for the happy, helpless creature.

“Kifaru, you do us great honor.” said Father Idir, but his eyes were hard. “What do you need?”

“The Herds of the Maru rule this territory,” said Idir. “They all take orders from our Matriarch, and only the Matriarch. The human cub is ours.”

“She may appear innocent, but humans are heartless and cruel. Her kind is my enemy, and I will avenge them with her. Give her to me.” The rhino stomped and roared, “It is I, Kifaru, who speaks!!” With this, even the chattering Jengo stayed silent, and trembled with fear.

Mother Nia then sprang forward, facing the blazing eyes of Kifaru. “And it is I, Nia, who answers! The human cub is ours – ours and ours alone! She shall not be killed. She shall return to her parents. And if they do not claim her, she will run with the herd and rule with our kin; and in the end, look you, hunter of little naked cubs – bully – troublemaker – she shall be free! Now go!” Nia arched back her head, baring her tusks, and shoved Kifaru with her massive trunk.

Kifiru might have faced Idir, but he could not stand up against the fury of Nia or the entire herd. So he backed away, grunting, and when he was clear he shouted:

“The cub is mine, and to my will she will come in the end!”

Mother Nia threw herself down among her children, gasping, while the baby whispered lightly into sister Oyibo’s ear and tugged on brother Oluchi’s tail.   Father Idir said to her gravely:

“Will you really keep her?”

“Keep her!” she said. “She came naked, by water, alone and vulnerable, yet she was not afraid! Look, she treats us like family already. And that monster would have drowned her in an instant. Still, she should return to her parents, if they are alive. We will stay with her and wait for her kin by the river for five days. And if they do not come, certainly we will keep her. Lie still, little firefly, for Makena the firefly I will call thee – the time will come when you will make us all proud, full of happiness and heart – and perhaps you will heal the wounds of the Mara.” But Makena, laying in Nia’s arms, had already closed her eyes and was drifting off to sleep.

For five days, the elephant family stayed next to the river which fed the watering-hole, waiting patiently for someone to claim the human cub. For five days they observed the comings and goings of the zebra and butterfly, the frog and the monkey, and even the race of the jaguar on the hunt for gazelle. Loo, the great blue crane, sent word across the grasslands and valleys, jungles and mountains, for all birds to watch out for a party in search of a baby girl. But no humans came. And here the girl slept peacefully through much of the day and night, content to be snuggled against Mother Nia, eating berries, drinking elephant milk from a little straw cup, and playing with the Nia’s cubs under the shade of a single great green leaf.

And so begins the story of Makena, the firefly, the happy one.

M.J. Sterling is an author who has pursued errant apostrophes, swatted spelling bees, and interrogated the whether woman, often in the same day. Her interests include word play, chatting with her anagram and having pun. She lives in a restored Victorian atop a hill in San Francisco with her husband, their magical baby girl, and an absurdly adorable dog.

Fuzz E. Grant: I was born and raised in Australia as the odd child that loved to be creative. I studied illustration in Melbourne, Australia, specializing in painting. But during a trip to Japan my love of paper blossomed. After a number of years working for magazines in Australia I got a case of wanderlust and moved with my husband to England. We left with four bags – two of which were full of paper! Three years later we moved to San Francisco where we now live. I work from a studio in the Mission District where I can usually be found underneath a flurry of paper.