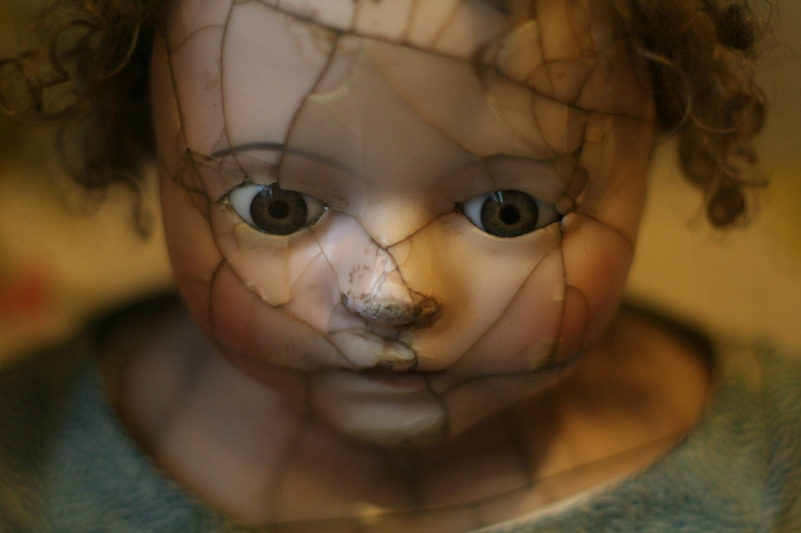 What a freakish awakening this morning. My guts felt heavy, as if they contained weighted stuff like rebar with concrete. I felt sick but unable to purge because it would hurt more coming back up. “Why risk more injury?” I thought to myself. It was going to be an enormous challenge to make it through this day if this beginning was any indication.

I pulled back the covers unmajestically to expose my left leg draped over the side, deftly anchored in between the mattress and box spring to help me propel upwards. It was not an easy feat. All the while, creepy flashbacks kept jutting into the brain space behind my eyes: struggling, hands, choking, bright lights, and a sense of foreboding as thick as pudding – a feeling of being under the control of another but not knowing who or what was doing the oppressing. And I remembered a metal taste in my mouth. Walking about my bedroom and keeping my head up was a challenge. These scenes added another level of disturbance. “Wow,” I just kept saying aloud to myself.  All I could think was “Hell of a nightmare you’ve manifested for yourself, Cynthia!”

The thought of coffee gave me hope of dispelling this feeling of unwellness. I meandered towards the kitchen, but the first stop had to be the bathroom; otherwise, my bladder might explode. Holding it in can be an arduous event, especially in an older woman’s body. A sneeze, a cough, or even a laugh can dampen our panties. From personal experience, I know this.

With my bladder emptied, I felt a bit better. The feeling of being accosted mentally as well as physically stayed with me, however. It was mind-numbing, but my physical being hurt inexplicably. I searched for any visible signs of injury and came to no reasonable conclusion as to why I felt each wave of pain so clearly. The pain was steadily weaving in and out in a coordinated dance, just like the visions in my head, which kept attacking me in bits and pieces. “Go get a room,” I said to the pain and the snippets in my head. “Leave me in peace.”

I meandered towards the kitchen, now eager for coffee but not quite decided whether it would be strong and black or sweet flavored and creamy. “Strong and black it is!” I said aloud. Even at a disadvantage, I felt superior thinking still reigned in my head. “Score one for Cynthia”! I thought and patted myself mentally.

I looked down at my bare feet slapping the floor in a slow rhythm. Suddenly, I was confused, even more than when I had woken up because there were sewing needles strewn up and down the hallway. Thousands, maybe millions, of them. A thick, neat line stacked densely on each side, and I was walking between them. The rays of the incoming sun from the living room reflected off each pin in a frantic shimmer of light shards, forcing me to squint my eyes. To say I was perplexed was an understatement. In this disco atmosphere, bedazzled seemed like a more appropriate term.

As I continued to walk through this glittering display of 18K gold-plated and nickel-clad, high carbon steel needles, the pain in my body grew stronger and more piercing. It felt like my insides were pushing outward but still hurt deep inside. It was an odd scene to behold, and I was getting more and more uncomfortable. I was also getting more desperate for answers to explain all of this.

I pushed open the kitchen door and headed toward the coffee machine. Oddly, the pain subsided a bit. I was grateful for a reprieve of sorts. Instinctively, I loaded the coffeemaker with water and coffee. If only the damn filters wouldn’t stick. First world problems. I grabbed the extra-large mug, thinking whatever this freaky morning was all about I could probably use copious amounts of coffee. At least, I hoped caffeine would help. I anxiously awaited that brown brew to sputter out.

All of a sudden, I heard a noise behind me. Startled, I swung around, completely forgetting about coffee for the moment, to see my next-door neighbor Jason standing in the doorway. The question “How did he get in my apartment?” swirled around in my brain.

Jason and I had lived in the same apartment building for about ten years. He seemed like a nice guy. I’d never felt uncomfortable with him, ever. He was a quiet, a bit of science geek who kept to himself. I’d never thought of him as dangerous. That’s why I guess his presence didn’t scare me. It just confused me. A moment later, I changed my mind as he stepped toward me.

He had a smile on his face but not a nice one, more like he knew a secret and I didn’t. I had to shake my head for a second. Seriously, what in the hell was he doing in my apartment? Did he spend the night? OMG – did we have sex?? Sheer panic began to shift from the pit of my stomach through every nerve in my body.

And that’s when I realized; I hadn’t been dreaming last night. Every fragment was a memory coming back to me. I still didn’t know all that had happened, but this was real. Jason had done something to me.

I began to scream.

Jason swiftly grabbed me and slammed me to the floor. It knocked the wind out of me, and I shut up real quick. He pushed himself on top of me and pinned back my arms with one hand. I tried to get out from under him, but his body was too heavy. The pain I had experienced earlier was even worse as he sat straddling my waist. Jason used his other hand to grab handcuffs from his back pocket and shackled my wrists together. He sneered confidently at me, seeming pleased with his efforts.

“Why are you doing this, Jason?” I screamed at him and continued to wrestle and attempt to wriggle free from his hold, but he ignored me as he continued to bear down. I stopped struggling a bit because I was wearing out.

“This is awesome! You’ll be awake for the next round! This time your eyes will be wide open, and you will feel everything I do to you!” He got off me but maintained a tight grip as he dragged me from the kitchen into the living room. I stomped and kicked as much as I could, but he was just too strong. I couldn’t break free.

What was going to happen to me? Jason slapped a strip of duct tape over my mouth, managing to cover one nostril which made breathing, already tricky, just a titch more strenuous. I was crying as well, which made it even harder to breathe. I couldn’t believe this was happening.

I saw an odd-looking contraption sitting in the middle of the living room. It looked like a weight bench, but not like any other I’d ever seen at the gym. Jason forced me roughly onto the seat of it, lifted my arms, and secured the handcuffs to it. He shackled my feet and fastened a belt attached to the machine around my forehead. Another belt went around my neck. Moving my head in any way would inhibit my breathing, so I stopped struggling against it. Now I was immobile.

As I lay there in terror, I thought of the phrase “Life can turn on a dime.” I’d heard it often, but I’d never quite imagined my life going from ordinary to utterly horrific in a single moment. Oh, sure, we’ve all had what we thought were life-altering moments. In reality, though, they only required a quick response and an attitude adjustment. Generally, we don’t experience many events in our lifetime that completely alter our being and sense of our world. Those events are just rare. But they do happen, and they will yank your chain till it’s broken.

I felt like I was about to be broken. And Jason had decided he was the one to do the job. I thought he was a harmless young man! Shocking to find out he had a sick and twisted mind. Do we ever really know people, though? I wished I’d paid more attention beyond the cursory conversations of niceties as we passed each other in the hallway.

Jason came up behind the contraption. He adjusted it quickly and sat me straight up facing the hallway. The needles I’d shuffled past earlier glistened and sparkled brilliantly. Jason had to have been the one to put them in the hall. But why?

“Now promise me you will not scream when I take the duct tape off your mouth,” Jason said. “We have work to do, so promise.” He said it seriously so I nodded my head slowly, tears running down my face. He ripped the tape from my face with quite some force. I tried to stifle my yelp of pain. After all, I had promised I wouldn’t scream.

“We are going to continue the experiment I started last night. I need to see if it works. Are you ready?” he asked me, apparently his guinea pig. Again, I slowly nodded my head, secretly hoping he wasn’t about to kill me. Frantic now, I tried to see if there was a way out of this predicament, but I couldn’t see any way to escape from this contraption.

With belts holding my head and neck in place, I couldn’t move as he opened my mouth and inserted an apparatus to keep it open. I don’t know why he asked me not to scream because the next thing he did prevented me from doing precisely that. He forced a large plastic tube down my throat. I thought I would pass out from the pain. He put things I could not see into my mouth. I could feel them going into my stomach. And I could taste the same metal flavor I remembered from waking up. What was he feeding me?

After what seemed like a lifetime, he stopped. Jason pulled the tube out of my mouth. I suppressed another yelp of pain, hoping it would keep me alive. I breathed heavily for a bit and got my bearings as best as I could until he decided to slap the duct tape back over my mouth. He told me he needed to leave for a bit, but would be back. I sat there for at least two hours, maybe longer.

Jason came back, unstrapped me from the contraption and led me into the hall with the needles. He stripped me of my blouse, then my pants. I stifled a cry, imagining what was probably going to happen next. He laid me on the floor and rolled me toward the wall until the front of my body nearly touched the needles. They immediately leaped forward onto my quivering stomach.

“IT WORKED!!!!” screamed Jason. “Humans CAN be pin cushions!”

He thanked me for helping him with this experiment, took the handcuffs off my wrist, and removed the duct tape from my face. I remember looking at him as he walked out of my apartment, my face contorted with pain and disbelief. It stayed that way for a long time.

Things wouldn’t be the same for me after this. Not my life. Not my body. Not my soul. Not now, not ever.

I got up, removing the needles from my waist. Then I called the police and a surgeon.

Susi Bocks is Associate Editor at the Fictional Café. She has self-published two books, Feeling Human and Every Day I Pause. You can find her work at IWriteHer.com, where she invites you to read her thoughts and get to know her. Bocks has had her work previously published at VitaBrevis, Spillwords, and Literary Yard, as well as other literary magazines.