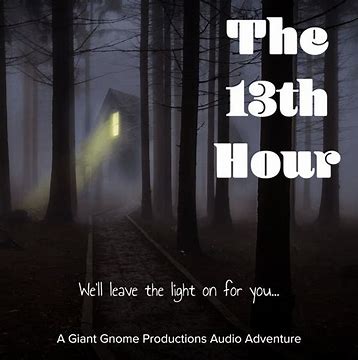 The 13th hour tolls for someone… is it you? It is the dark side of midnight and time to face your innermost fears. Here, shadows overpower and banish the light, freeing the monsters of your imagination. When the 13th Hour strikes, so does the fear inside us all.

We’ve got two more weeks of this Horror month on Fictional Cafe, and we sincerely hope you’ve enjoyed listening as much as we have enjoyed posting. As a reminder, if you are triggered by scary stories, violence and horror, DO NOT LISTEN! We will be back to our regular, family-friendly, cheerful stories after Halloween.

A former Pinkerton detective learns that ghosts of the past – and hidden secrets – have a way of coming back from the grave.

Next on the list, the 13th Hour presents – Episode 3 – The Rock and The Ghost!

Two little girls go trick-or-treating on the wrong side of the tracks. What could possibly go wrong?

Special thanks to the Poudre River Public Library District for curating this story during the Short Short Spooky Story Contest and allowing us to adapt it to audio.

We hope you’ve enjoyed the 13th Hour by Giant Gnome Productions. If you would like to hear more 13th Hour Episodes, please check out their website or iTunes. And if these Halloween horror stories are not to your liking, you can still check out Fictional Cafe’s Audio Arts Page. There are plenty of cheerful, family-friendly audio adventures for you to enjoy. And as usual, we will have a new podcast posted every other week at 7PM, EST. So don’t change that dial!