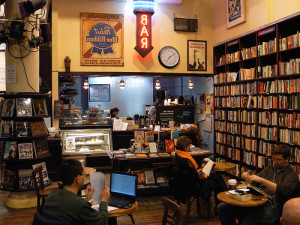 …or maybe you’d rather be in a cubicle…

As we close our first year of operation and look forward to 2015, we have to say it’s been a bumpy road. A lot of things went wrong. More things went right. In most ways, it’s been just like our careers as writers: tough, but worth it. Coming to the end of your writing year, you might be tempted to look at the “Con” column and think about giving it up. Here are ten reasons not to.

Forget what some doomsayers like Scott Turow might tell you – the Internet has democratized distribution, simplified publicity and created massive demand. These changes might make Stephen Kings and J.K. Rowlings a bit less common, but it’s easier than ever to make your living just from your words.

Writing is location-independent, which makes your morning commute a breeze. If you want to get more exotic, it’s just as easy to write from a Hammock in Hawaii as from your home office. I’m spending this year in Malaysia because of this factor. Where would you spend a year if you could?

No other career lets you tell other people what the voices in your head and your imaginary friends have to say…well, not without risk of heavy medication. Writing lets you get those ideas, images, voices and characters out into the world where they get to meet other people.

Admit it, you love doing this. Even when that person spends the next hour telling you all about the book he’s always wanted to write, but never got around to. Someday, we’ll all be risen enough individuals that our egos don’t get a kick out of this. Today is not that day.

How many books did you love that got written by somebody long dead who you’ve never met? A well-written story that touches people at a personal, emotional level extends beyond the boundaries of your location and lifespan. It’s a kind of immortality.

Don’t kid yourself: writing is time-consuming and difficult. But you can make that difficult time happen around the other things that are important to you. Writing for your living means no more asking for time off to catch your kid’s ball game, or missing a travel opportunity because you’re out of vacation time.

How many hours do you spend at your regular job wishing you were writing? Although it’s scary, frustrating and harder than it looks to anybody who doesn’t write, it’s still more fun than any other career.

Go to a writers’ conference, or critique meet-up. Writers are interesting people, and most are a little bit starved for conversation. Being a writer means you’re part of a really cool industry full of interesting, interested people.

Yes, you’ll have clients. Yes you’ll still have to do things you’d rather not, and be nicer to people than you’d like to. But at the end of the day you’ll be making your own decisions to move yourself toward goals you set, and reaping all the rewards of meeting those goals.

You’re not going to stop writing. It’s an addiction, an internal itch that can only be scratched by dancing with the written word. If you could have stopped writing, you would have years ago. So why not go ahead and make it part of who you are and how you make a living?  The only thing stopping you is…you.

Got anything to add to the list? Put it in the comments below.  Let’s keep this conversation going so we can remind ourselves throughout 2015 of the awesomeness that is writing.