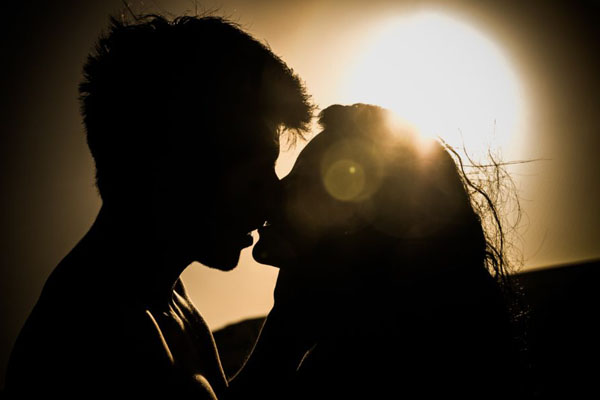 They spoke with their hooded eyelids, inches away from the other’s face. There was no need for room, only each other. Only their secrets. Those secrets one assumes only they hold when in fact the person sitting next to them, breathing the same air, is thinking the same false thought. Too many secrets. Too many unanswered questions. Too many unasked questions. Not enough time.

They were invested in each other, fully, completely, yet they only knew what the other chose to trust them with. Humans are such untrustworthy creatures, it takes too long to believe someone is undoubtedly who they say they are. Words are a flight risk, but conversations that only involve long, solemn glances and quick, excited stares? Those are difficult to fake.

A pendant around one of their necks lightly tapped on the other’s chest in a methodical rhythm. Cold fingers brush cheeks and grasp onto clothing, both only wanting to be closer to the other body. Soft aggression was the only way to put it into words. The chemistry was undeniable, but one could tell, no one would deny it in the first place. They were so close, yet there was an entire galaxy between them. Each part of them, a star the other wished to discover deeply, thoroughly, truly.

Each star, a little light of knowledge about the other. Knowledge; mint breath and necks that smell of lemons and cologne. Knowledge; wrinkled t-shirts and tattooed wrists. Learning each other through small talk, quick glances, long stares and smells. They couldn’t fathom the simplicity it took to obtain all this knowledge. It was intimate, very intimate, but they did nothing beyond their stares. They longed to know more. They looked into each other, way beyond the surface of their clothes, the surface of their skin, deeper. Blue eyes fighting brown ones as they continue in their silent war.

Silent? No. There was nothing silent about the breath they were trying to catch. Breathing in and out in harsh tones, breathing in the other’s breath when there was no more breath around them to acquire. They were together, there was nothing but them, yet they were fully aware of the whole universe surrounding them. The constellations moved from the sky to their skin and all they could see was each other’s light but because of this, they were now surrounded by darkness. With no stars in the sky, the two were alone, finally. Their greed, of course, had a great consequence; they had found each other by taking the stars from the sky, but now everyone else was lost. Wandering in the dark of night, yearning only for day, yearning for the light it would bring to their lives.

Branches sway around the two souls, connecting them with the Earth and all her glory. They feel her breath course through their bones and settle in their stomachs, they feel as they become one with the one who has brought them here. She makes their bond stronger, she creates a force that consumes them and holds them and allows them to trust each other more. Their stars become clearer and laughter rises from closed throats, mixing with the songs of the winds dancing around them.

They cling tighter in the darkness. Move closer. Look deeper. They lose their fear of being open because now they are more open than they could ever be and someone else is looking directly at them. Not caring that this sun of a person is making their eyes sting, only wanting more more more. Knowledge. This knowledge was not something that would leave. No. It would stay. Burned in their minds for centuries to come, burned into a mind for a lifetime, however long that life may be.

Emotions bubble over and consume the two in their lonely togetherness, their paradise for two. There is nothing left but them. Them and all that they are and all that they are not, finally fully exposed, finally raw. An untold secret now shared between three, an everlasting bond holding a plethora of thoughts and ideas and emotions. Raw. Raw. Raw.

Welcome eyes have peeled back layers of soul and searched through the center like it was a book they thought of as an old friend. It felt comfortable, it felt warm. It felt ice cold… It felt familiar. Lips part on one creature who can no longer be called human.

A.D. Wolf hails from Massachusetts and now lives in Brooklyn, New York, where she is studying photography at the Pratt Institute. She says, “I began seriously writing about two years ago with the help of one of my greatest role models, my high school English teacher. I haven’t stopped to this day. With her help I know I have improved tremendously, and for that I will always be grateful.”