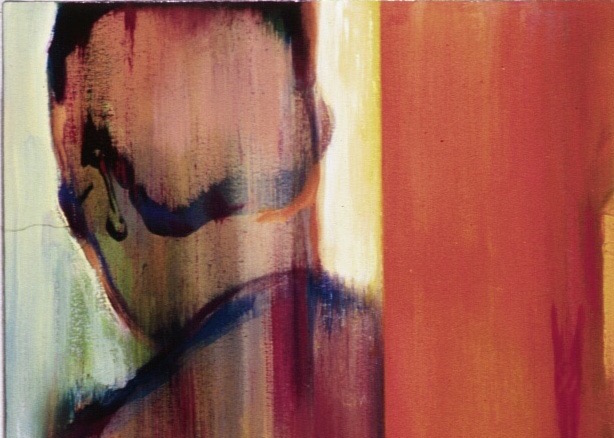 [Image courtesy of Katheryn Holt (c)2016. For more of her work, visit her site.]

Patrick had never needed to use a public phone. He noticed them occasionally, forlorn and disregarded objects in the urban landscape, but he didn’t really know if any of them worked. Still, he asked for change from the pretty dark-haired barista with the bumblebee tattoo on her neck. He handed her a dollar and she fumbled through the tip jar, smiling as she dropped the coins into his palm one at a time. He felt an electric charge when her fingertips brushed his. Maybe it was from all the appliances she handled.

He left the café to hunt for a phone, unsure where one might be found. People passed by talking into their cells, staring at their screens. He felt powerless and vulnerable, as if an essential cord that kept him relevant had been pulled from its connection. He could have asked the barista if he could use her phone. He should have explained the situation to her instead of embarrassing himself by begging for quarters.

None of this would have happened if he hadn’t spilled coffee that morning rushing out of the apartment that he shared with Brad. He must have left his phone on the kitchen counter when he grabbed a wad of paper towels to sop up the mess. His roommate Brad might still be at home. He could at least confirm.

The red box, bolted to the graffitied wall outside a Laundromat, was a relic, the paint chipping away, phone book torn to shreds. The sidewalk here smelled of urine, irritating his nose and eyes. It was humiliating to be seen like this in public. Even the homeless had their own phones, pay-as-you-go ones purchased at the convenience store, or maybe the City provided them phones instead of finding them decent places to live.

Speaking of which, a man with a face like a dented can approached, pushing a cart of trash that was probably the sum total of his worldly goods. He halted in front of Patrick, pinning him against the phone box with the cart, shouting into his phone: “I don’t want to hear no excuses, man. I don’t care about your troubles. I want my fucking money today— with interest!”

Everyone was a capitalist/entrepreneur now. You had to be to survive in this town.

The man tossed the phone into his cart and clattered on, muttering to himself incoherently. Patrick hesitated before he picked up the payphone’s receiver. It was filthy, greasy from the hands of countless hamburger-chompers and French fry chewers. A gray wad of gum, hardened with age, crowned one end. He held it to his ear and fed the slot with two quarters. A faint wavering dial tone materialized, an ancient-sounding low humming that seemed to come from somewhere deep inside the earth.

He peered blankly at the worn numbers on the buttons. Fuck! He didn’t know Brad’s number. In fact, he didn’t know his own number. They were both on his cell’s auto-dial.

He felt dizzy and started to sweat, so far from his comfort zone it wasn’t funny. He stood there confused and hapless, like some Neanderthal grasping a greasy Mammoth bone and staring at a cave wall inscribed with figures that made no sense to him at all.