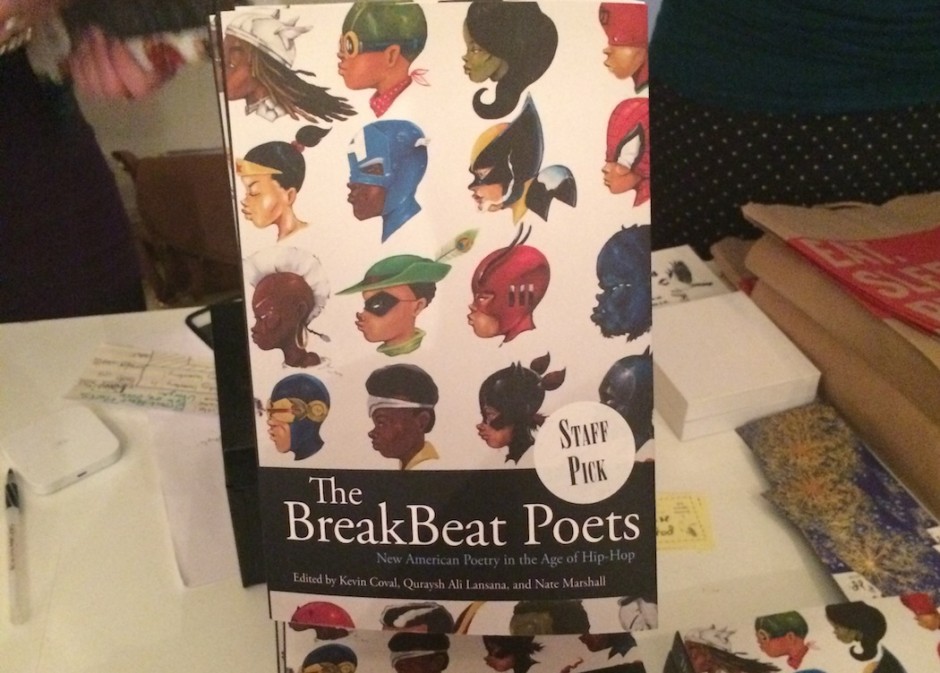 I had no idea what to expect when I decided to attend a poetry reading called “The BreakBeat Poets” at an art gallery. So even though everything that followed was, by definition, “not what I’d expected,” that phrase did little justice to my actual experience.

As I entered Uforge Gallery on a balmy Thursday night, I was greeted with the aroma of wine and the sounds of hip-hop music echoing off paintings of men without faces and photographs of women sitting on the floor. A panorama of bodies in motion, buzzing, stretched from wall to wall. The organizers of the event, Papercuts J.P., had a table with the anthology of poems by The BreakBeat Poets and the poets’ individual books for purchase along with tote bags, bookmarks and free wine. 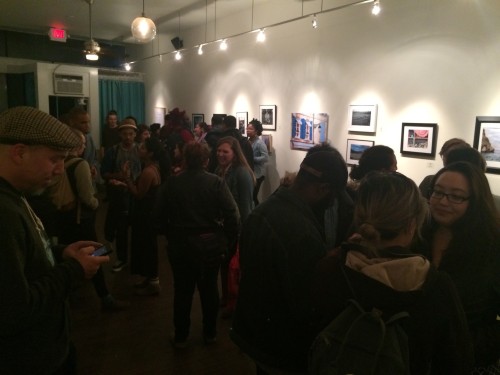 I found a singular seat along the back wall, right beside two iPhones plugged into the wall outlet. My communion with technology was cut short by a young woman named Leslie who took up the open spot next to me. She had a slight southern accent and a friendly smile. As we waited for the poetry reading to start, Leslie told me she was in town for the week from DC for the Conference on Retroviruses and Opportunistic Infections. I asked her what it was like working in medicine in the political capital of the country. She told me that she found the underground club scene to be her anchoring point amidst the swell of briefcase wielders. We eventually got on the topic of ghostwriting, particularly as it pertains to recent news about Drake’s songwriting credits. As if on cue, the hip-hop music in the background started to fade out and a different kind of lyricism was about to begin.

The emcee for the night was Idris Goodwin, who originally coined the phrase “breakbeat poets” over seven years ago while talking with Kevin Coval, editor of the anthology. He noted that the book’s main influence was hip-hop and as a poet who’d grown up in Detroit, that concept resonated with him. This collection emphatically states that poetry is not just about “dead white dudes who got lost in a forest.” 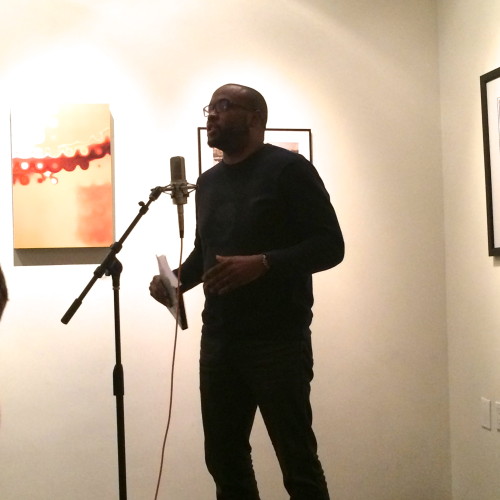 Idris shared a poem about his experiences over the years with other people’s misappropriation of his name (Editor’s Note: on iPhones, “Idris” gets “corrected” to “ideas”): from an employer where he worked as a custodian who said “We’ll just call you Eddie,” to a Muslim man who wondered how an African-American man born in Detroit was given the name of a prophet in the Koran. And when someone asked what his name meant, he quipped, “Philosophic cleaner of urinals.”

While his poem spoke to the microagressions against race and heritage in America and around the world, his delivery drove his frustrations home. His voice boomed through the gallery, echoing off the walls and artwork as if trying to penetrate their canvassed consciousnesses.

Next up was Eve Ewing, hailing from Chicago. She read a poem called “To the Notebook Kid,” which peeks into the life of a school-aged boy from a violent neighborhood in the city. He’s a boy with a “tongue stained purple” and a “jacked-up Five-Star” notebook, dreaming of Alaska – the furthest place he knows of – when he hears shootings on the streets outside his window. I imagined this kid, pitied his situation but admired him for getting “that good B in science class.” 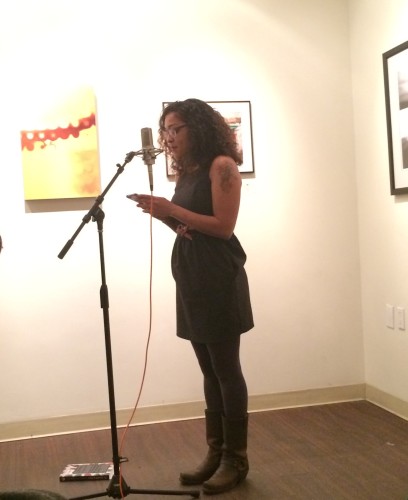 Then she said she was going to read a sonnet and gave a shout out to everyone who recalled from high school English class that it was going to be 14 lines long. “English. All day,” she exclaimed.

She left us with some words of wisdom in her last poem: “Get your ladies some ice cream, fellas.”

By now I was really feeling this reading, as was most of the audience, which stretched all the way to the door. People were sitting in chairs, on the floor behind them and standing behind them. After each poem, the crowd erupted in applause, cheers and snaps; even paintings on the walls clattered a little in appreciation. The hip-hop influence on both the poetry and the audience gave the reading a distinct concert feel. It was not a typical day at the art gallery.

Idris introduced the next poet, Harvard University graduate, José Olivarez. As he stepped up to the mic wearing a White Sox cap and several necklaces, he donned a big smile that lasted until well after he’d sat back down. 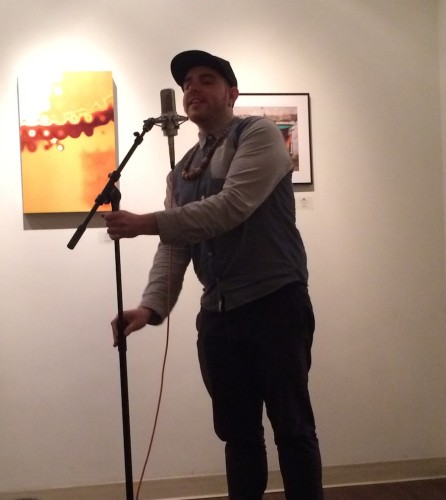 He’d been the most vocally appreciative of his fellow poets, while listening to Idris and Eve. I was prepared for a great, uplifting poem. Then he says, loudly and emphatically,, “Fuck Harvard University. I’ll say that on the public record.” As the audience caught it’s breath, he introduced a poem about dropout fantasies inspired by the music of Kanye West, notable Chicago college dropout. This poem was part scribbled-in-a-notebook-on-a-dorm-room-bed poem, part open letter to the Establishment: was he “brave for staying or a coward for not leaving,” he pondered.

In another poem, he reflected on being the only Mexican student in his kindergarten classroom. His feelings of loneliness and isolation resulted when he couldn’t communicate with fellow students, as he only knew Spanish. Even his teacher didn’t want him in her class. He exclaimed, “My loneliness would walk home with me/My loneliness held my hand as I crossed streets.” It hit me hard at that point. What a great way to express that young boy’s emotions. My applause followed him all the way to his seat, just like his smile. 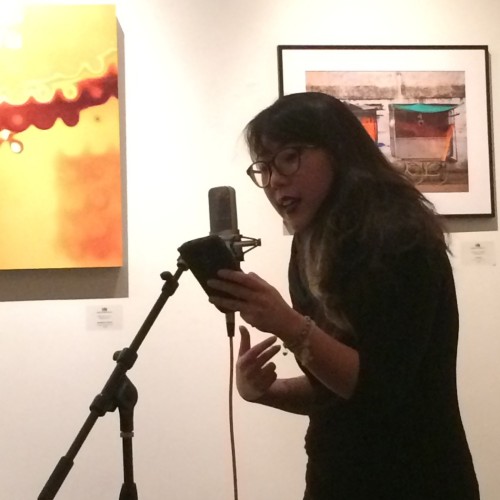 When Franny Choi walked up to the mic she represented a microcosm of my experience the entire night: whatever expectations or preconceptions I had were utterly dashed by the end. For her part, she began with a poem about her struggle to accept her Korean name and the implications for her future as a writer. She recounts slurs and stereotypes about garlic breath, seaweed and blood sausage before finally proclaiming: “I’ve accepted. If someone has loved me more for my gook name, for my saint name, for my good vocabulary & bad joints, I’ve welcomed them into this house.”

This was as tame as it got with her stuff. She said, “I was thinking a lot about desire because I got on Tinder recently,” then proceeded to read poems from the perspective of a mute Asian robot, building on her theme of what society has decided a modern Asian woman is – this passive receptacle for male use.

She smiled as she told the audience how great it was to be here in person, live in front of an audience and how nice it must be for us. “No ads… Like you get three free poems then a promoted poem comes up.” The audiences was still laughing when she announced that her next poem was called “Pussy Monster” by Lil’ Wayne and that she’d arranged his lyrics in ascending order by number of times they appear in his song. I won’t spoil it for you; I’ll let you guess which word she said 40 times in a row at the end, said “thank you” and took her seat. 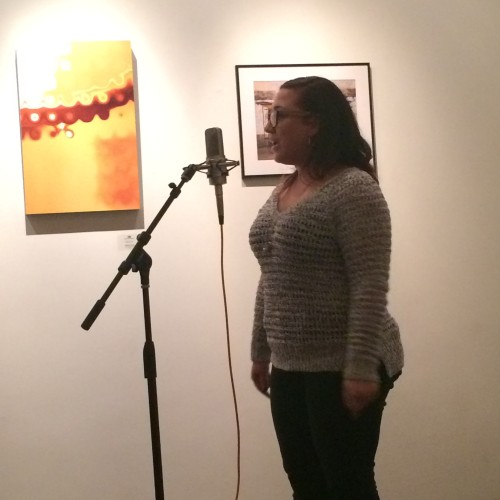 Sofía read from her theater production called “For Men Who Leave, For Women Who Stay.”  Her story is a poetic journey through relationships that is part spoken word, part hip-hop (with live music as well). She gave the audience a lot to ponder, including the idea that “Human can mean hero, but it always means blood and bone.”

As she went to take her seat, a member of the audience shouted out something about Sofía Snow Day coming up. She turned a shade of red momentarily and said she wasn’t going to bring that up tonight. This is what the man was referring to. It’s great to see such humility in the arts, especially with many aspiring writers and artists in the audience. 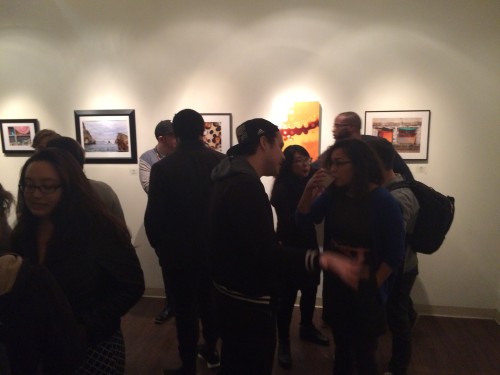 Idris thanked the crowd for coming out and invited everyone to talk with the poets and get their copies of the anthology signed.  I turned to my new friend, Leslie, and we resumed our discussion, this time focusing on the poetry we’d just heard and our favorite parts. We transitioned into a talk on race in her home town on the gulf coast of Mississippi, where tensions between African-Americans and Asian-Americans have become a major issue.

One of the most fulfilling aspects of going to live events is the humanity of it: finding those connections that link two people who may have very little in common on paper. It happens every time I talk to a stranger at a reading, exhibition or event, and even though I shouldn’t be surprised, I am. Those six little degrees of separation can bring two worlds together.* Just like how the BreakBeat Poets’ hip-hop background takes poetry and pries it from the rigor mortis grip of “dead white dudes who got lost in a forest.”

Papercuts J.P. recorded the event and posted the podcast on their site. Check it out!

* She brought up an idea regarding race in America popularized by a friend and dormmate of mine from college. It is a small world.