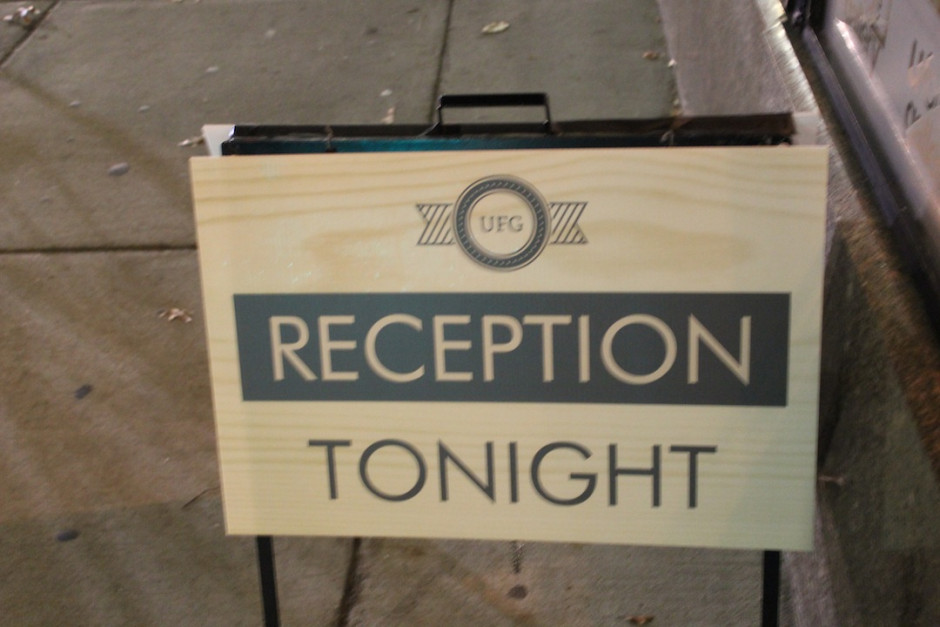 I step into the din that is opening night of “Abstracted” at UFORGE Gallery, and am instantly struck by the energy of the small space on Centre St. in the artsy Jamaica Plain neighborhood of Boston.

The brightly lit white walls scream hospital sterile, yet the patrons paint the room vibrantly colorful. This is not the pearl-adorned SoWa crowd of those warm, careless summer days. No, the crowd here is salt-of-the-earth artists and art admirers, chatting away about process and inspiration as much as about personal interests and weekend plans.

The sheer volume of artwork strikes me. Thirty artists are featured in this exhibit with one to three pieces each, making the walls close in a little and the people stand nearly shoulder to shoulder throughout the room. 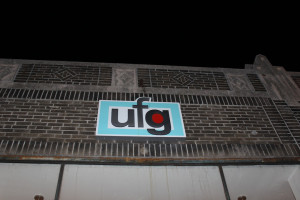 As I make my first pass through, I pull up in front of a painting of skin with several wounds on it, showing computer circuitry underneath like a cyborg. It reminds me of these toy dinosaurs from when I was a kid. They had removable chunks of flesh on their sides to show a battle wound, presumably from a T-Rex bite or Velociraptor claw.

A man standing next to me looks down the painting to see how the artist managed to put actual circuitry on a canvas. He tells me of his appreciation for the job done here as an example of SciArt. I’m unfamiliar with this phrase, but he continues that SciArt is something that he admires and seeks out. I mention that I work for a literary magazine and am here to support an artist we’ve published. He tells me he also works in publishing and we discuss our jobs as the patrons walking through stop and inspect this unique piece of modern art.

I continue around the room, making note of some of the more interesting pieces like an LED and acrylic painting that reminded me of those neon laser light screensavers 15 years ago and an oil painting of frogs on lily pads with needlework over the top of the canvas that create depth and texture, like looking through pebbled glass at a scene outside. 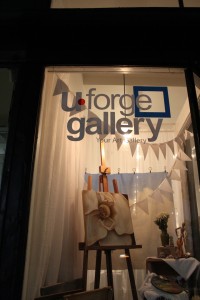 As I approach the last piece, a young man walks over to me and asks how it’s going. I say I’m enjoying all the different styles and mediums represented here. I ask if he is an artist and he points to his piece, the only one I’ve not yet seen. It’s this brightly colored abstraction, nearly the size of a refrigerator – certainly a statement in whichever living room it ends up.

As it turns out, the painting has been hanging in his own living room. He tells me of his doubt that his piece would sell, adding that he would have felt that way even if he’d priced it at $200 instead of $1000.I have a flashback to an episode of the HBO show Six Feet Under, when Claire’s art class has an opening featuring students’ work. The dynamics that unfold are of self-confidence – one of her classmates prices his piece way too high as a statement of his own artistic value – and of self-doubt, as we see Claire underpricing hers, justifying herself by saying, “I’ve never sold a piece in my life. I want someone to buy it.” Yet all night long, she distresses over her work not selling. Somehow, maybe that self-doubt seeps out and into the artist’s work. Could that be the case with this young man?

The hardened cynicism in his mind bubbles over into his mannerisms and I can see that he’s uncomfortable in this schmoozing atmosphere. Does he feel underqualified to be here? He appears to be the youngest artist in the room and I start to get a sense for the true struggle that faces the modern day artist. The young man tells me he’s not a big networker. He’s not good at it. I ask him if he has a business card and he meekly tells me no. I ask for his website and he asks me, “Are you even going to look at it?”

A part of me feels this deep sense of empathy for the rawness of rejection an artist must feel over not selling pieces. Art is so personal, it must be hard to not take it personally when one’s art doesn’t sell. Yet, I see the reality – that success today means not just being a talented, confident artist, but also putting one’s self out there: standing out from the crowd and being one’s own hype-man.

I left the opening wondering what would become of this young artist. Would he put in the time to get better and to get out there or would he fold like so many others? Would he defer his dream for a while, coming back to it years or decades later with a new eye and a renewed resolve, like several artists and writers I’ve met while working at the Fictional Café? Maybe we will see him on these pages one day.

To all the hard-working artists and writers out there, I tip my hat to you. I would hate to live in a world without new art and literature and because of you, I don’t have to.

“Abstracted” will be open at UFORGE Gallery through November 29th.