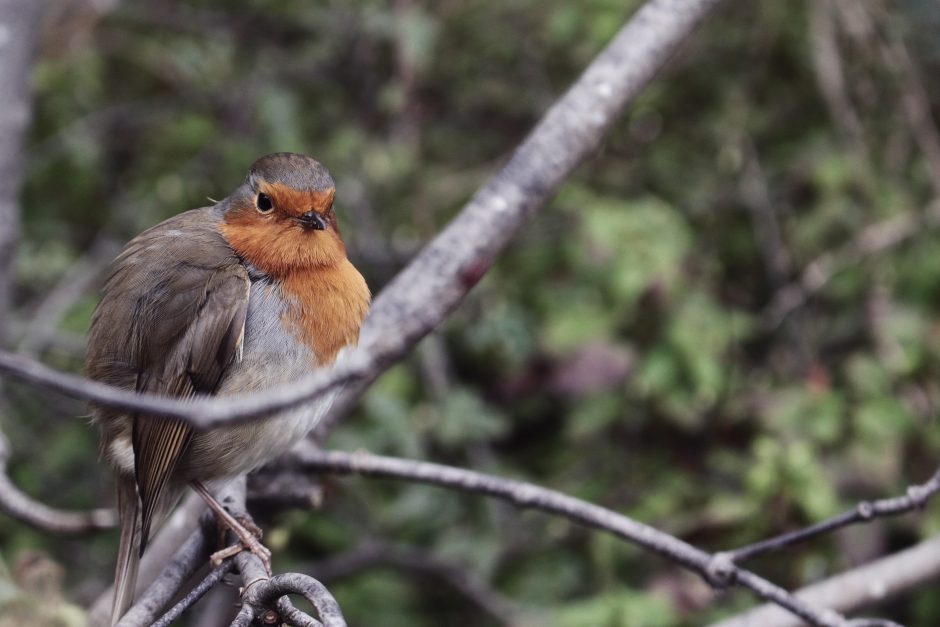 Robin perched in her tree and frantically counted the eggs in her nest. She feared she had taken too long hunting for worms which in turn gave other creatures ample time to steal her eggs. But, it was just too damn hard to find any food. The ground was as hard as a brick and the grass as thick as a jungle. Why couldn’t it rain just a little to help loosen the soil, or why couldn’t someone cut the grass and drive those worms out of the ground for her, she thought. Was a little help too much to ask for? But, all four eggs were still nestled together just as she had left them, and her worry began to ease.

She then scanned her immediate surroundings for any signs of intrusion. Claw marks? Chipped bark? Broken limbs? Mangled nest? Had some miscreant been lurking while she was away, it would most likely return later that night. But, there were no signs left behind by anyone. She then heaved out a sigh and lowered herself on top of her eggs.

Twelve days had already passed with her sitting there, and she knew her eggs would hatch any day. When that occurred, her time out of the nest would have to be minimal, quick and efficient, perfect if not lucky or else some villainous critter would take a victory lap around her nest, a tragedy she had experienced far too many times—eggs lost to blue jays, crows, squirrels, and even gravity. And then there were the eggs that did hatch—the ones that made it out only to be lost to hawks, cats, and the men on mowers.

At least during the day, every bird was alert and helped each other. But the night was empty of such vigilance, and it wasn’t uncommon for nearby frantic clamor to drag Robin out of a dead sleep, a commotion that meant someone was fighting for their life. Each oval-shaped memory rolled through Robin’s mind as shadows stretched across the open field.

Robin recalled the time when she was the source of such frantic clamor. A time when she lost an entire brood of eggs to a possum one dark hot night. It snuck into the tree and covertly made its way up to her nest. She awoke to the sound of creaking branches before her eyes had time to adjust to the possum’s ghastly face, red beady eyes, and razor-sharp teeth. She remembered her heart galloping like a giant racehorse trapped in her chest. She remembered aimlessly bleating and pecking as it clawed its way closer before knocking her to the ground and stealing her eggs with the devil’s grin smeared across its face.

Yet, she still prayed every day for a life rid of having to survive it. A prayer that evil didn’t find her and her babies and eat them alive. A prayer that creaking branches were caused by the wind and not by the carried weight of some predator heading toward them. She told herself that she would look for such a place when she was done being a mother, but she knew nature would make that difficult if not impossible.

Robin called out with a few soft chirps against the sweet smell of grass. Multiple others ensued, and she felt safe if only for a moment before her tiny eyelids closed. Later that night, Robin woke to muffled noises and gentle movement beneath her. She immediately feared the worst but was soon relieved at the sight of her eggs beginning to hatch.

Fresh cut grass and a week of heavy rain helped Robin and others find food. She had experienced a few scares by predators during the day and only one at night, but she managed to fend them away without losing any chicks or hurting herself. But now, all four of her babies were thick with fatness and feathers, and Robin knew they were ready to be on their own. So, that afternoon she nudged one by one out of the nest. As they fell to the ground, they awkwardly flapped their little wings and landed softly in the grass. Upon shaking themselves off, they quickly began waddling through the grass to search for food.

Their first hunt, Robin thought with both fear and pride, like a child’s first day at school. Suddenly, a large bird with an ill-intended stare landed in the same patch of grass. Robin squawked and rocketed toward it, and just before she speared it with her beak, the large bird took flight and was no longer a threat. Robin then hurried from one baby bird to another and nudged them with encouragement to fly. Quick. Fly away, and be safe, she thought. One by one, each bird eventually lifted and flew out of sight until Robin was left standing alone. Robin said a prayer for each one and then went back to her empty nest.

Less than a week later, Robin found herself pregnant all over again. Consumed with fear and indignation, she began flying as far and as fast as her wings would take her. Her last clutch of eggs—all four of them—had survived, which she feared stacked the deck against her next clutch. She was certain she would lose at least one if not more—another horrible memory she wanted to avoid. It wasn’t just the thistled spring that cut into life, it was something persistent, a fear she could never outlive and where only a safer place could help ease her worries.

And so, she flew out of desperation toward the horizon, searching for the place her prayers called for. She lifted higher and higher into the air, and soon she began to notice where the land and the ocean met. Seconds later, she noticed a dark line stretching over the horizon. With each flap of her wings, the dark line grew taller and thicker and wider and even began protruding into the ocean.

A minute later, the thick dark line she had been chasing came into focus. It was comprised of towering metal sheets, and altogether the sheets formed a giant wall. As she approached to land, each sheet, plastered in multi-colored spray-painted phrases and pictures, grabbed her attention. She landed in a nearby tree and looked at the base where many people were standing—waiting, talking, planning—and she noticed they all shared the same look of desperation.

To everyone, including Robin, the wall represented both hope and fear—hope that a better future exists and a fear they wanted to leave behind. The wall signaled that a safer place must be on the other side, a side they all desperately wanted to be on. Robin lifted into the air and landed on top of the wall, ready to continue her journey. But, before she took flight, she looked down at a young woman resting her arm over her pregnant belly. Her clothes were tattered, her shoes worn through, and she carried a small backpack over one shoulder. Dirt had dried across her sweaty face. Other men watched the pregnant woman too, some with concern and some with malevolence, like the predators Robin had encountered. Robin closed her eyes and said a prayer for the pregnant woman, and hoped she would see her on the other side.

David Norwood lives in Grand Rapids, Michigan with his wife and four kids. He enjoys bringing his imagination to life as stories and especially looks forward to his free time so he can read, write, and stare at the trees in his backyard. His stories can be found both in print and online. This is his first feature on the Fictional Café.