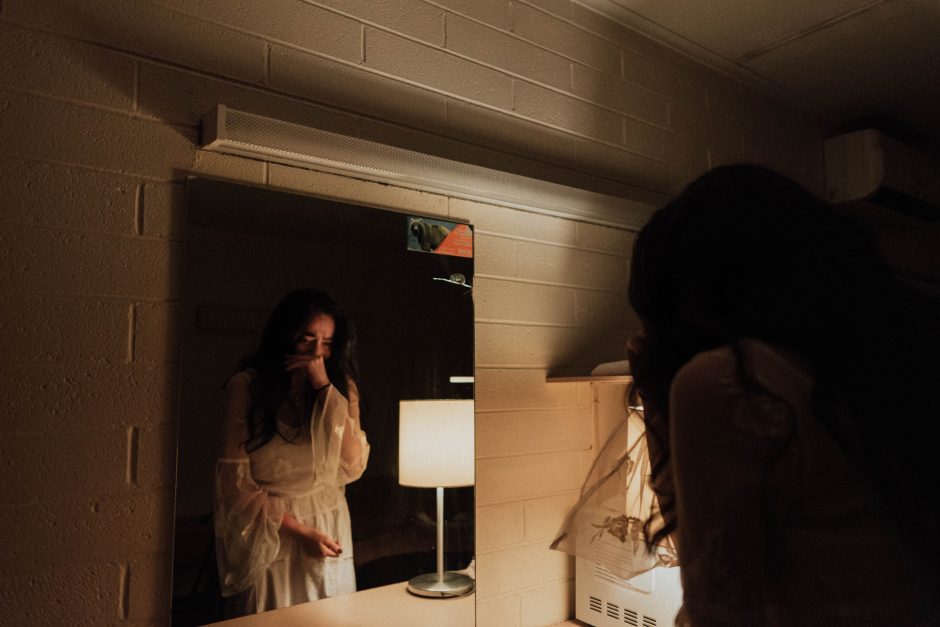 Editor’s Note: We are pleased to announce the return of Frank Diamond to the Café. His latest short story, presented here, is accompanied by the song “To Live Again” by singer/songwriter Camille Peruto, and a reading of the story by actress Maggie Peruto.

The Place Where the Chiefs Meet

I am 26 and it’s the night my father died. My mother insists that I had nothing to do with it. My siblings don’t play; they curse me over the phone. They’ll be in tomorrow. At one point, I slump at the kitchen table, crying and sick from withdrawal. Crystal tugs my arm: “Mommy! Mommy! Mommy!” I shake loose and run out.

I should head to my apartment, but I don’t want to be alone. Dizzy’s not there. He’s heard about Antonio and decides to visit friends “in Jersey.” That’s as much as he’ll narrow it down. If he’s scratched the itch enough he could be with another woman and know something? I don’t even care anymore. So I walk Fishtown the night my father ends, seriously thinking about following Dad to the other side.

Mom knows this. Earlier she’d said, “Be fair to your girls. Please, be fair to me.”

Well, what’s fair? Having a junkie moms? A waistoid daughter? I am scheduled for rehab the next day, but this fills me with dread, not hope. Dread of never again floating on the Sea of Mellow. Dread of losing forever the beautiful images, of expanding my consciousness until I become an angel looking down. Dread of failure, too. Some people in the neighborhood go in and out of rehab like they have season tickets. Maybe one or two escape for good. Not great odds.

As I walk, the past strolls by. The birth of babies, the breaks with men, the smoking, snorting, huffing, and shooting up. The headline about Kat Borkowski. “Body Found In Park ID’d As Missing Fishtown Woman.” I’ll get a headline, too, just because I’m Antonio’s daughter and everybody will know why. The obvious gets headlined.

I look up, and I’m at Newt’s. I hear kids, loud then hushing one another, up to something. Three boys and two girls and—wait—I recognize Babs. She’s 20 and still hanging at Newt’s? She takes a joint. Inhales. What am I going to do? Tell her just say no? I turn. I am sick.

The word comes to me. I stumble a bit. That morning I had an entire conversation with my Aunt Kitzy, Dad’s aunt, really, paying her respects and she’d asked me to fetch her tea and when I came back into the room, it was empty.

“Cheryl,” Mom says, shaking her head, “she was never here.”

None of this that I am seeing is real. Or some of it is. I don’t know. The row homes, four or five abandoned, blink sadly like tethered beasts. A deep, rustling sound as if the earth clears its throat. Something hits me flat on the head. A big raindrop, the beginnings of a downpour but the wet washes rusty over the scene. “Smack! Smack! Smack!”  against the asphalt. I start hurrying off when Babs calls out.

I swing about, but the kids are gone.

Where they ever there? And who’s there now?

I squint, can just make out four men. In robes? Priests? No, not robes. They’re wearing ponchos. They’re scowling. Years later, I learn that Newt’s had once rested on Lenape land that they called Kachamensi: “The place where the chiefs meet.” Someone walks toward them and I faintly recognize her. As the men gather this alternate me into their protection the individual raindrops meld into a single force. Before they disappear into the wall or the past or the netherworld or wherever the fuck they came from, one of the chiefs turns, juts his chin out at the real (I think) me. A decision’s been made. I will live.

About Frank Diamond: My poem, “Labor Day,” was nominated for a Pushcart Prize Award. My short stories have appeared in RavensPerch, Insider, Kola: A Black Literary Magazine, Dialogual, Madras Mag, Reverential Magazine, the Examined Life Journal, Into the Void, Empty Sink Publishing, Zodiac Review and the Fredericksburg Literary & Art Review, among many other publications. I have had poetry published in Philadelphia Stories, Fox Chase Review, Deltona Howl, Artifact Nouveau, Black Bottom Review, and Feile-Festa. Find those and other of my creative work on his website. I live in Langhorne, PA.

This is his second feature on The Fictional Café. You can read his first here.