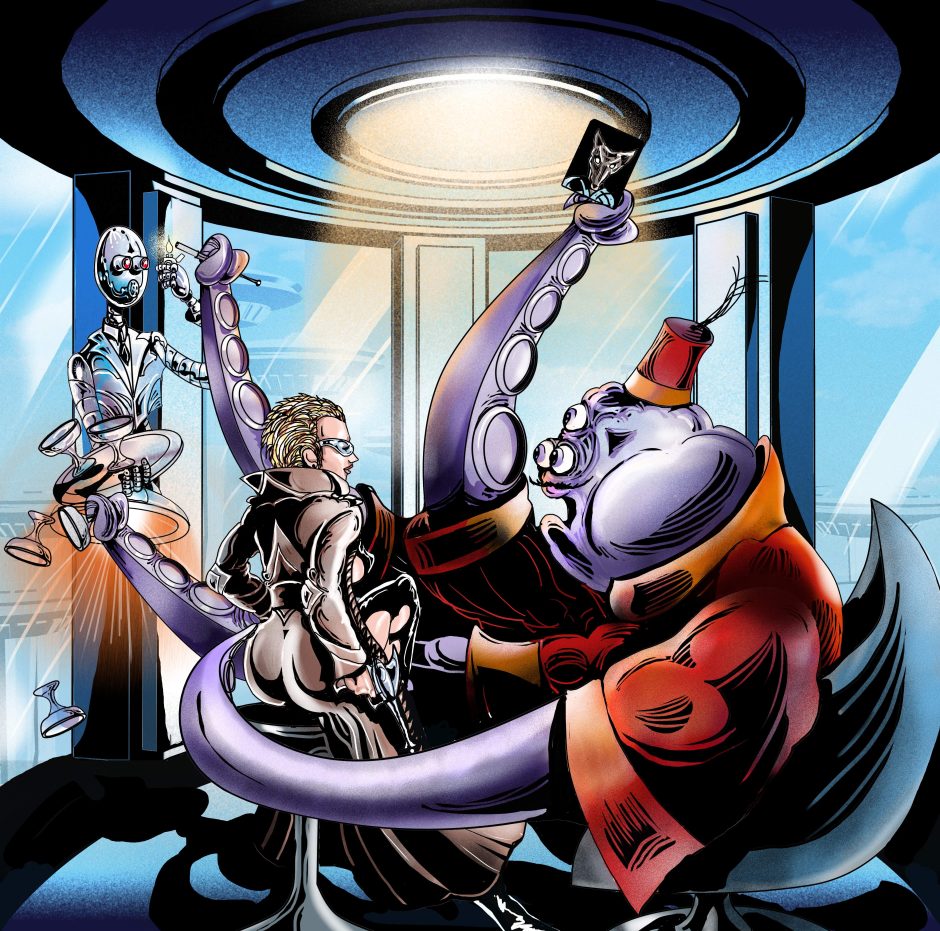 Happy March, Fictional Cafe Listeners! The month of March is known for quite a few things: March Madness, St. Patrick’s Day, Mardi Gras, Pi Day, Daylight Savings, but one of my favorites is International Women’s Day. And who better to represent women but a tough-as-nails, galactic gumshoe who who doesn’t take sass from anyone?

Written by Thomas Lopez and produced by ZBS Foundation in 1982, “The Adventures of Ruby the Galactic Gumshoe” is a podcast of a tough, intergalactic detective at the heart of this expansive storyworld, where sci-fi meets film noir in the style of Blade Runner, but with a unique blend of slapstick comedy, cosmic consciousness, and stunning sound design. In this third season – a fan-favorite and great introduction to the series – Ruby traverses space and time as she investigates a dark force coming from Magnifico, the City of Malls.

Laura Esterman starred as Ruby in the first series and Karen Young starred in the second series as “Ruby Too”, another version of the protagonist, while Esterman, as Ruby, had a cameo part in this series. Esterman returned to the lead role from Ruby 3 onwards, credited as Blanche Blackwell.

The series was originally syndicated to air on the radio in episodes of approximately three to four minutes long, but later released as half-hour episodes to radio stations. To date, thirteen Ruby adventures have been released, the most recent in 2019.

Ruby has been broadcast in 23 countries, including Canada (on CBC), England (on BBC), Australia (on ABC) and the US (originally on PBS, more recently on Sirius-XM Satellite Radio). Ruby entered Science Fiction’s Audio Hall of Fame for Best Science Fiction of 1982.[1]

We hope that you enjoyed the Adventures of Ruby the Galactic Gumshoe by Thomas Lopez. If you wish to hear more episodes, you can check out ZBS Foundation‘s website, Youtube or iTunes. And of course, if this gutsy gumshoe isn’t to your liking, check out Fictional Cafe’s Audio Arts page. We post a new adventure every other week, Friday 7 AM, EST. So don’t change that dial!