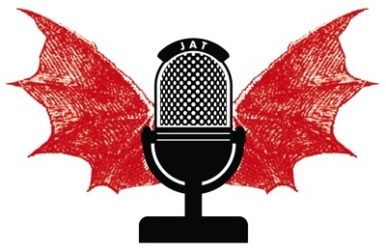 Welcome Fictional Cafe viewers, did everyone enjoy their Cinco de Mayo? Because it’s time for Rogue Tyger : The Pilot. We have a fun 5-part series this week from Jabberwocky Audio Theater, because who’s sick of sci-fi? I’m not!

5,000 years into the future — in a corner of the galaxy where Earth is no longer known — humans and a dozen other sentient races have forged a civilization. Spacers brave the oceans of void between hundreds of worlds for power, glory, and simply to survive. This is the tale of one band of spacers and their ship: the Tyger.

Jabberwocky Audio Theater invites you to join the crew of the Tyger as they search for adventure, riches, and possibly redemption. Modeled after classic cliffhangers such as Yours Truly, Johnny Dollar or that one with the alien guy and the police box, each Rogue Tyger serial will be five episodes long. You’ll travel from the outer planets to the frontier and back to the core systems. On the way, you’ll get to know the crew:

In their travels, they’ll encounter allies, villains, and everyone in between.

Join them for victories, defeats, and more than a few surprises along the journey.

Aidan Vosky, a youth trapped on an uneventful planet in the backwater Haapsalu system longs to travel among the stars. He goes to the spaceport in an effort to join the crew of one of the vessels… but may get more than he bargained for when he meets the crew of the Tyger.

The crew of the Tyger are being pursued by a mysterious ship right after leaving the spaceport of Haapsalu. Are these simple, run-of-the-mill commerce raiders or something more sinister? More to the point, can they escape?

The crew of the Tyger must assess the damage done to their ship and themselves, all while trying to escape the ruthless enemy ships pursuing them.

The crew of the Tyger race to repair the ship, treat their injured pilot, and come up with a way to escape as the Nokari mercenaries comb the asteroid field looking for them.

Finishing repairs in the nick of time, the crew of the Tyger are forced into a desperate plan to escape the Nokari mercenaries closing in on them.

We hope you’ve enjoyed Rogue Tyger : The Pilot by Jabberwocky Audio Theater. If you wish to check out some of their other audio adventures, follow the link to their website: Jabberwocky Audio Theater . And as usual, if you wish to check out more fun stories, the Fictional Cafe Audio Arts page has a new podcast or audiobook every other week at 7, EST. So don’t change that dial! And May the Fourth be with you 😉