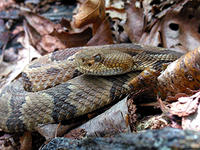 A number of years ago, while visiting the Smithsonian Air and Space Museum, I was struck by the fact that many science fiction authors had envisioned the future in their novels, then watched as their vision become reality. Well, guess what? It’s happened at the Fictional Café, too!

We recently published a short story by Kathryn Holzman entitled “Rattlesnakes.” It concerned a group of people demonstrating against creating a sanctuary on an island in a Massachusetts reservoir for…yep, rattlesnakes. Oooo, I thought, that’s a creepy idea! But I liked the story a lot, especially the dream-like ending.

So it was with some surprise that I read this article by Jan Gardner in the Boston Globe a few months later:

“Tale of the timber rattler”

“After a public outcry, the state of Massachusetts earlier this year withdrew its plan to raise timber rattlesnakes on an island in the Quabbin Reservoir that is closed to the public. The state had hoped the protected habitat might help boost the state’s rattlesnake population.

“Massachusetts and other New England states command prominent attention in the new book“America’s Snake: The Rise and Fall of the Timber Rattlesnake’’ (University of Chicago). Timber rattlesnakes — called “as American as apple pie’’ by author Ted Levin — were originally found in 31 states, but the population has been in decline since Colonial times. They are extinct in Maine and Rhode Island and endangered in the other New England states. In Massachusetts, it is legal to kill a timber rattlesnake if it’s an act of self-defense.

“Levin has worked as a zoologist at the Bronx Zoo. Among the threats the snake faces are fatal fungal infections, automobile traffic, and inbreeding.

“A reader of Levin’s book might conclude that rattlesnakes have a lot more to fear from humans than humans have to fear from rattlesnakes but reason doesn’t always prevail in discussions about snakes. As Levin writes, “Once you get to know timber rattlesnakes, it’s hard to remain neutral; they’re venomous and potentially deadly, no question, but they’re also beautiful, helpful, long-lived, social, mellow . . . and predictable.’’ Because they are creatures of habit who don’t stray far from home, Levin changed some names and locations in his book to protect the rattlesnakes.”

Writers know that most fiction is based on real-life events. It’s a squiggly line that often separates one from the other. In this instance, it’s good to know the unsettling outcome of Kathryn’s story has a happy ending in reality.