Posted by Jack B. Rochester in Guest Posts, News 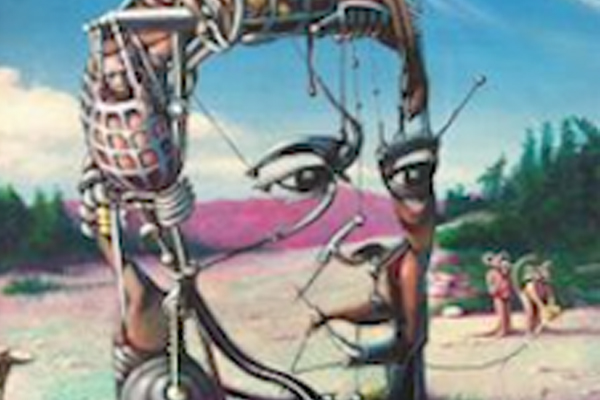 Our frequent contributor and friend Michael Larrain is, first and foremost, a poet. And, in some of his verse, he is  a surrealist poet. Thus it’s quite natural for him to comment on surrealistic poetry. We found this short article very interesting and hope you will, too.

To do any kind of serious writing work, you need—simultaneously—to sink both into yourself, your own torments and obsessions, and the world’s multifarious irresistible corruptions, to learn the savor and cost of every vice and the weight of every disappointment, and at the same time to rise up in great joy, to rise and rise always like bubbles in a glass of beer. The tension between the sinking and the rising holds you in place, listening to your own mind, overhearing screams from far away.

The original circle of poets surrounding Andre Breton (in surrealistic portrait above) in Paris circa 1924 (Paul Eluard, Benjamin Peret, Robert Desnos, Aragon, et al) believed that at the heart of surrealism was an attempt to unite the conscious and the subconscious minds. Only where they join do the most disturbing, and meaningful, utterances emerge.

For most American readers, there never was any such thing as surrealist poetry. In fact, the movement began with writers and only afterwards did painters came on board. American surrealist poets have been few, and considered obscure figures: Philip Lamantia, the Beat poet Bob Kaufman and perhaps most notably Bill Knott come immediately to mind. But the most towering figure (who, I don’t suppose would ever identify himself this way) is the 2016 Nobel Prize winner in literature, Bob Dylan. In perhaps the greatest of his many golden ages, Dylan’s output from 1965-1966, which gave us the albums, “Bringing It All Back Home,” “Highway 61 Revisited,” and “Blonde on Blonde,” were all written in a kind of homegrown American surrealist voice. Looked at in this light, he is the only surrealist writer ever to win the Nobel.

My own body of poetical work, which holds an extremely modest place in the history of surrealist poetry, has always left me wondering where this material comes from, these strange, wondrous images that have not been crafted in the usual sense but burned their way through the atmosphere and landed in our hands. Recently, at the advanced age of 68, I learned, to both my horror and amusement, that I had temporal lobe epilepsy. Though this news was alarming, it answered my old question. The simplest definition of epilepsy mentions that it is “associated with abnormal electrical activity in the brain.”

I decided that the poems I’ve been writing for over fifty years are the direct result of that abnormal electrical activity, born of seizure, convulsion and the loss of all our usual means of navigating within our own minds.