Posted by Jack B. Rochester in Fine Art, Writing 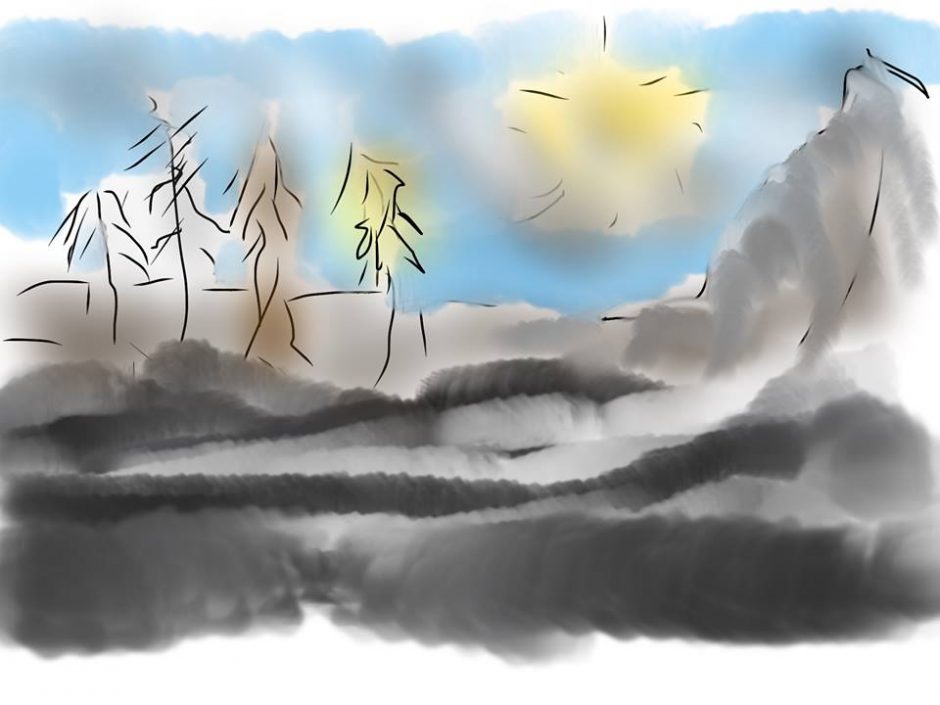 Alethea Eason is an artist in both words and images. Each of her visual collages here is accompanied by a poem or a flash fiction.

Atlas of My Body 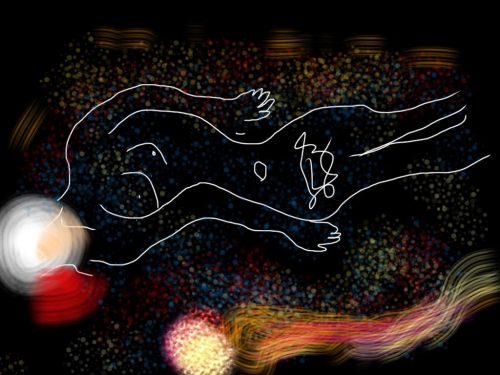 unearthing lost spaces
of my geography.
My feet filled with myth.
My legs freed to carry me
to the then and now.

I pursue a fevered safari
with the radical prison of time
discovering the chandelier
of my hair, my breasts’
awakening orchids,
the lucky coin of my navel,
my vulva’s whimsy box.

The river moved
all that was obscured.
Time and myth concurred
to find a radiant key to open
my heart, the legend
that makes sense of all the rest,
The atlas of my body
uncovered and easily read.

The Charms of Eleanor 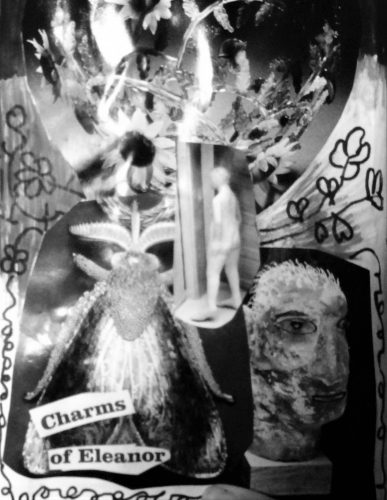 You write of the sunflowers and the jeweled moth you found nesting within their leaves. I opened your letter tonight, holding it for a long time before I broke the seal, whilst watching another moth, a humble gray fellow, dance around the porch light. I have always felt like the shadow flittering around your incandescence, dear Eleanor; your words have brought a sheen to this blue night. I would carpet myself with gray wings and fly to the southern skies. I would discover your golden body beneath the moth scented flowers, my insect love humble and free. 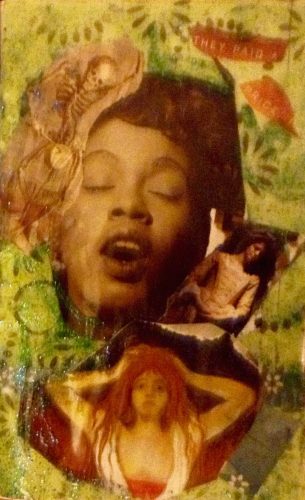 I remember the dark green bedspread in a room shaded by leafy elms. I waited the long afternoons with my white dress unbuttoned, breathing in and out, listening to the water drip into the porcelain sink, counting minutes, then hours. Death was in the city as he was each summer, and he needed to forget himself at times. He paid a handsome price and was not unpleasant to look upon. He finally tapped the door and walked in, sadder and more tired than usual. We didn’t rise until midnight, and even then he lingered beneath my sheets for a while. 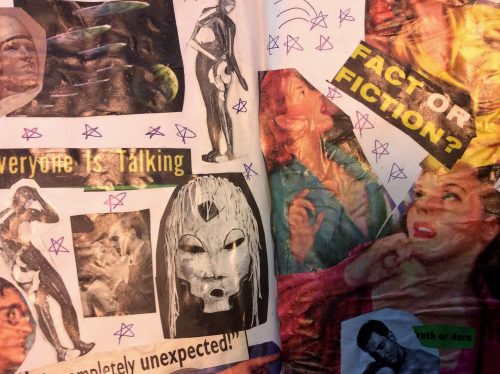 But I was just a human girl who fell in love with a tall kind Silver; very boring, really, the oldest of love stories. We couple, and yes, the form of mating is unusual, but why shouldn’t we be allowed to walk down the street… 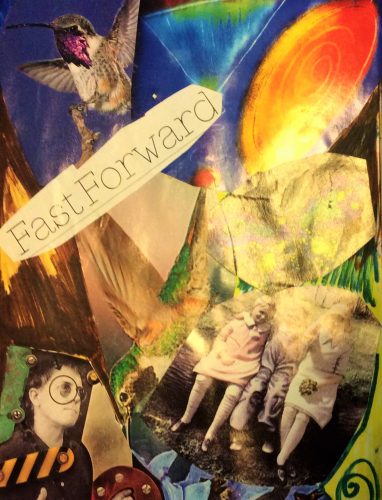 My time traveling father left no map of emotion when he set the clock. What do I say now that I am grown? Decades have passed since he kissed my mother goodbye. Should we have martinis and watch our photos go viral? Just before he fast forwarded he said, “Space is bending,” seconds ago, or a lifetime meandering from that moment to this. He gave me this jeweled butterfly to wear for our meeting that I left in tissue paper until this morning. The world waits for my father to save it, waiting for my brilliant father to appear.

Return to the Strange Strands 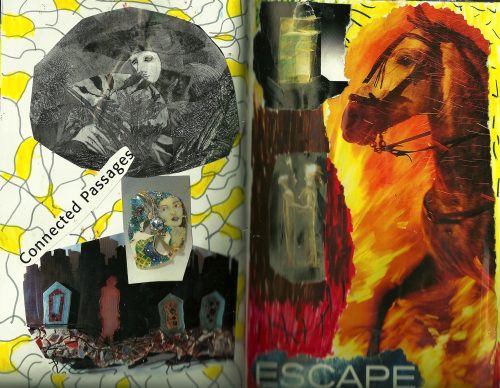 “Just step through the door,” he said. “Anyone can change.”

Had she heard waves?  She wasn’t sure.

The man was very polite, but what an odd duck. That just didn’t seem like something she’d considered. She looked behind. She couldn’t remember what was there.

The man set down his cane. “Take as long as you need.”

She guessed they might hold a conversation, but instead said, “Well then,” and then repeated, “Well then.”

Crashing wave…a warm beach. A change? Why not? She just might be due. Her brown pumps pattered over the road of colored glass. Dark warehouses. Doors like gay coffins niched in walls. On a whim, she pushed one open. No palm trees. No warm sea.

She’d turn around, that’s what she’d do. Give that strange man a piece of her mind, but she’d never find her way back. “Never” made her unable to swallow.

She thought she might stand there forever; then something sparkled up ahead, a robe of liquid glass. She looked down. Her brown shoes had filled with sand.

Why couldn’t she have stayed home, continue her quiet life in her small house?  Instead that impostor had to summons her out a decent night’s sleep. The glass people cavorted in the waves, far away, but they were all so clear, all rainbows.

“All along you were the ocean.”

The man was behind her. So he’d followed her after all.

His breath touched her skin. She shifted uncomfortably at his closeness, but then a fiery wave crashed down, a breathing chariot of flames. The sand of herself flowed molten and searing into him until she became an iris, eternal, a prism of living glass, and he was gone.

He hadn’t lied to her. In this place, even she could change. 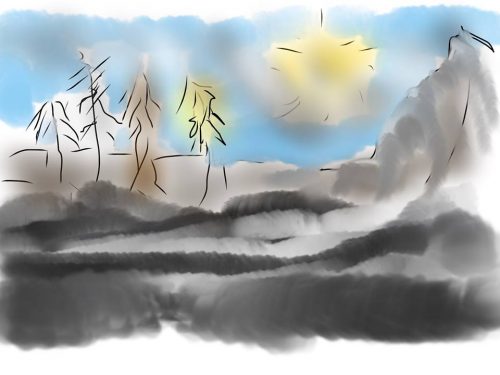 I drive with the jangled jazz

of trucks and cranes, white-suited men,

that for thirty summers I held my breath

only to exhale with winter rain.

The mountain is in mourning, chimney tombstones

against the sky. Ashes slowly breathe carbon into air.

My breath is shallow, though it rains,

winter is for real for the first time in years.

The mountain is dark, even the islands

that remain green or brown with beetle bark.

I round the curve to Humboldt and find three deer

on a sterile lot. They are still and lost,

wildflowers in spring and vistas that will heal hearts.

Alethea Eason is an author, educator, and artist who lives in rural Northern California.  She conducts workshops called ReNew Your Muse that guide people to connect with their creativity and spirituality.  Her work has recently appeared in Lamplight Magazine, The Del Sol Review, ironsoap.com/200ccs, and in the anthology The Kindness of Strangers (Wising Up Press).