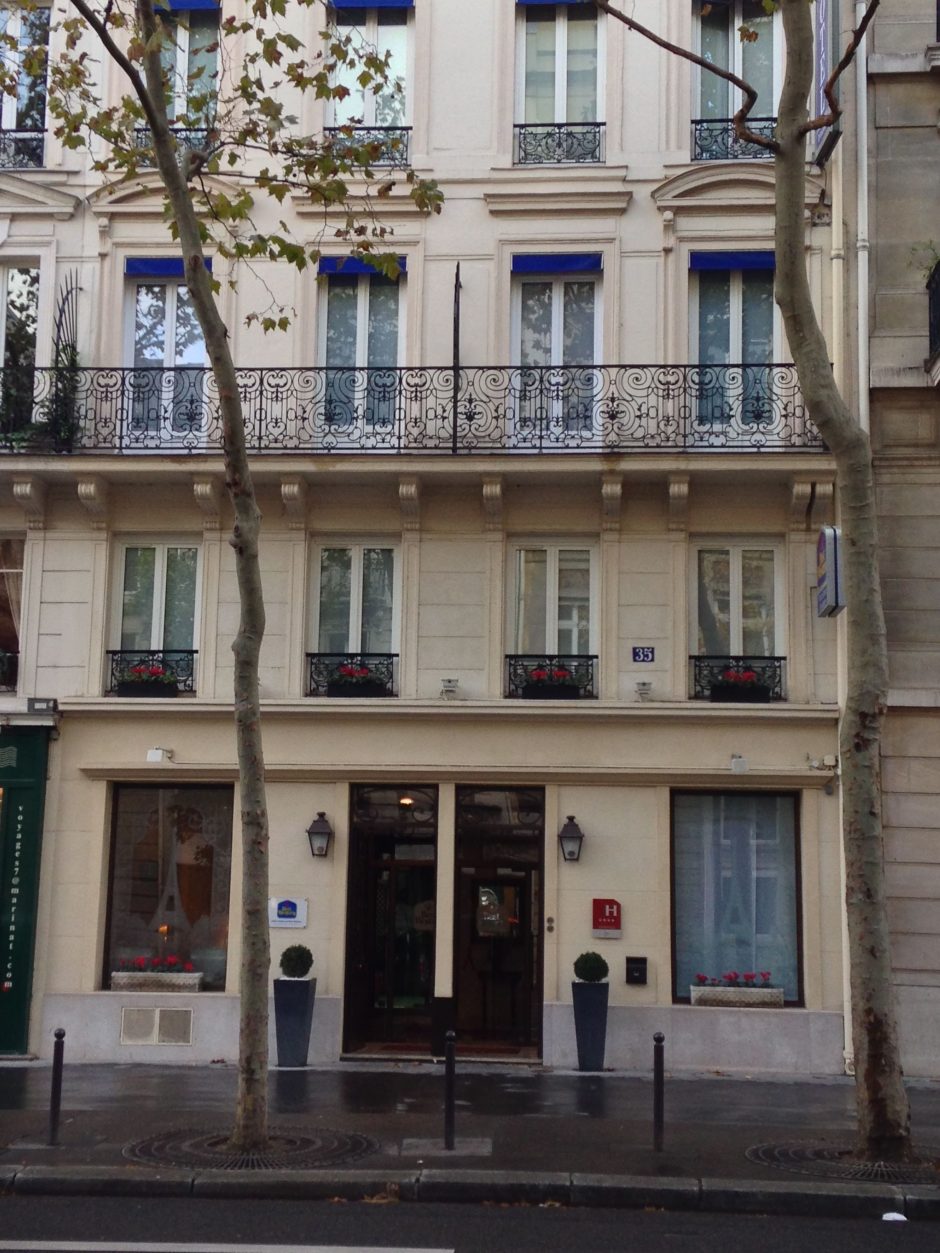 When I become incensed at prejudice, I tend to fight back with an edge of cynicism aimed at cutting through to someone’s stupidity. I am always hopeful that I can be an educator rather than a warrior against bigotry. George, a French Jew who had come to America, had told me of the growing anti-Semitism in France and the French collaboration in the deportation of his family from Lyons to the WW II concentration camps. He had grown up with French anti-Semitism, had witnessed the attack on Jo Goldenberg’s Jewish delicatessen, battled to defend Israel at the Sorbonne and finally—fed up and exhausted—convinced his family to move to the US.

It was the late 1980s. I was scheduled to meet with the president of a French firm to discuss his acquisition of my client’s company. A few streets from the hotel, nausea and fatigue from three glasses of Champagne and an ice cream sundae had caught up. I needed to heave. I tapped the driver on the shoulder, making reference to my malaise. With gestures of compassion, he wove through three lanes of traffic and screeched to the curb. I opened the door and relieved myself of the Air France dinner. I felt good about the driver’s good will, was impressed with his gallantry and decided to give back to France a little unconditional love. After all, I had spent many wonderful holidays with my wife at a villa in St. Paul de Vence and Zola was my hero.

My travel department had booked me at the Lutetia Concorde. At the registration desk a clerk told me that unfortunately no reservation in my name existed. I pulled out my copy of the reservation and flashed it in front of him. He stared at it for a while and then apologized.

“Monsieur,” he said and followed with my last name. Now, my last name, pronounced as it is spelled, could be German, Polish or Jewish. When it is said with drawn out-vowels, its Jewishness is accentuated. It’s the way I was addressed in college when invited for hot toddy on Beacon Hill during Christmas. “The Management,” the clerk said, disavowing that he was part of management, “regrets any unfortunate mistake.”

“Maybe,” I replied sardonically, “the Management double-booked the room—not you of course, Claude.”

“Non-Non, Monsieur ___,” (pronouncing my surname in Jewish), “we have had computer problems. The room that was booked for you is still occupied. There is a mistake. If you will make yourself comfortable in the lobby, as soon as a room is clean and available, I will come and find you.”

By the time my room was ready it was too late for a nap. I was unshaven, grubby and exhausted, but I changed into a suit and hailed a cab.

The company’s headquarters was in an industrial park near Orly Airport. The receptionist recognized me from my previous visit.

“The President will see you shortly,” she said. “Welcome.”

The President came out to the waiting room to greet me. He was a small, thin man with a long, aquiline face, Gallic lips, a high brow and piercing brown eyes. They were warm and gentle eyes. Honest eyes. He was graying at the temples and wore an ordinary striped shirt and a mismatched tie. His sleeves were rolled up. It was our second meeting and I liked him. He offered me a glass of wine. I took one sip and lowered my glass. After an hour of small talk, which I found delightful, and some serious business babble, he agreed to consider retaining my firm’s services. He asked where I was staying. I told him and he paled slightly. I wondered why. He asked how I had gotten here and I told him by taxi. He said that they were unreliable and called his car service.

Twenty minutes later a small Citroen pulled up at the entrance. The driver wore a head piece. The radio was blasting Persian music. The driver motioned for me to get in the back and asked if I was American. I said I was and when he entered the highway he told me that America was good but we should stop supporting Israel and that the Holocaust was fake. When we arrived back in Paris, I got out of the car and leaned in the window.

“I lost family in the Holocaust,” I said speaking in soft tones. “Whoever told you the Holocaust was fake may have lied to you. Maybe your Ayatollah fabricates these fictions for your countrymen.” Then, losing my cool and the credibility of my prior statement, I added, “Asshole!” and walked away.

What was I supposed to say? I don’t agree with you. I can get you documents proving there was a holocaust. Should we have a cup of Turkish coffee and talk this over in Farsi? This attitude of mine was not helping my blood pressure. Surely, I might have handled the conversation with greater finesse, impressed him with more data, been more compelling and influential instead of behaving like an enfant terribe!

I was starving. The lights in the cafes twinkled. Groups of people and couples were dining, drinking wine and talking gaily. In one corner of a small, charming restaurant, an older man sat with a dog by his feet; a napkin hung from his open collar. He was reading the paper and nibbling. I strolled further. I passed more restaurants with more couples, lovers and groups of students and professionals deeply engaged in what I imagined were French politics or courtship games. I wondered if any of them had read Sartre’s classic book on French anti-Semitism.

So who needs to dine on sole Muniere and truffles in one of those chic little places? I thought. Maybe if I had brought my wife along like I did on the last trip it would have been nice, but all alone? No way. Then I saw the golden arches, lit up like a sentinel to a lost seaman. I wanted a piece of America right there and then and I got it. The Big Mac and the fries.

When I got to my room there was a message to call the president of the company. He answered right away. He said he was sorry that I had booked the Lutetia and apparently I was unaware the hotel had been the headquarters of the Gestapo during the War. “I thought you should know,” he said. He added that the furniture was the same and in this hotel Jews were interrogated and then disappeared.

I sat in a chair by the window in my room. I looked at the furniture and wondered who had slept in this bed. I washed my hands and dried them with toilet paper so as not to touch the towels monogrammed with the name Lutetia. At 2:00 AM I packed my roller bag and took the elevator to the lobby. I told the night clerk that I was checking out. “Was something wrong with the accommodations, Monsieur?”

Again, I couldn’t restrain myself.

“Your brochure is misleading,” I said pointedly. “You should include the story of this hotel after the Nazis took it over. That might attract old-timers from the SS and the Wehrmacht. Great place for a reunion. Hayden’s “Emperor Concerto” in your lobby. A few gypsy ladies for your officers. It’s a marketing error not to promote your core advantages.”

The clerk looked at his shoes.

I took a taxi to the airport and waited for my flight home.

Author’s Statement:  After the recent shootings at Charley Hebdo and the Kosher Deli, many people in Paris marched with signs that said Nous Sommes Charlie—we are all Charlies. There were no signs that said Nous Sommes Juifs. We are all Jews. A recent survey of the French people indicated that 60% of the French population believes the Jews are the cause of French anti-Semitism.

Thousands of Jews are leaving France. My romance is over. Il fait Morte. There are battles in the fight to eliminate prejudice that need to be won right here in America and they will be won with softer and more impactful words than mine. I will be quiet and calm now. My blood pressure is normal again, Au revoir, Paris. Home is the hunter, home from the hill and the fisherman home from the sea.

Sandor Elias Blum is a psychotherapist, consultant and educator, He has recently published a novel, The Pundit of Coolidge Corner, and a volume of poetry, The Road.