Posted by Mike Rochester in Interviews 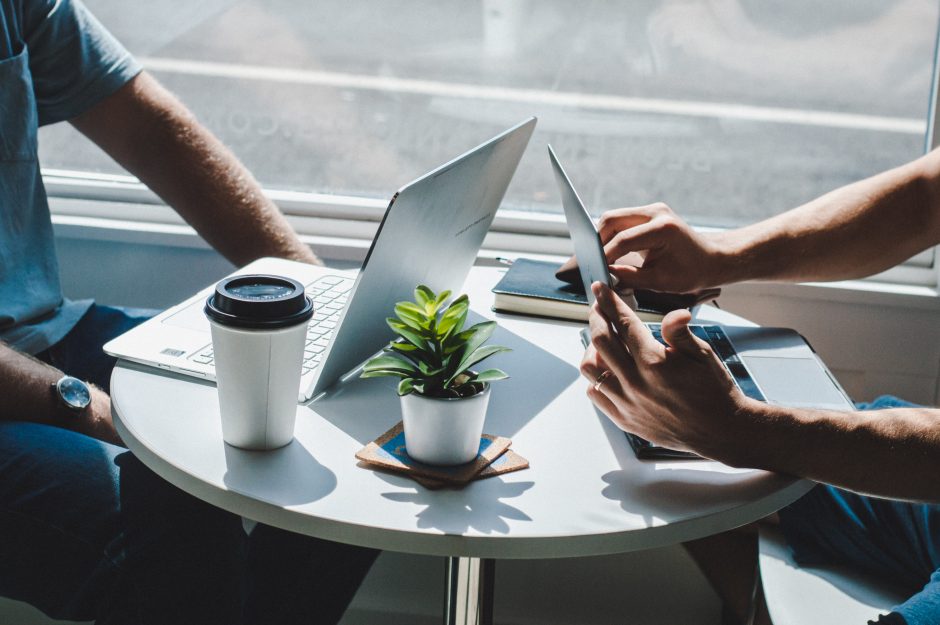 At The Fictional Café we love writers and love the written word.  We want to showcase the best contemporary writing and give our subscribers innovative, thought-provoking works across a whole range of art forms.  When it comes to fiction and poetry, every so often one of our Baristas really connects to a certain work and goes the extra mile to help showcase it to our global audience.

This was the case with yesterday’s featured story, Knowing, by Jarrett Mazza.  One of our Editorial Board members, and Fiction Barista, Michael Piekny, really connected with Jarret’s writing and reached out to see whether Jarrett would be interested in working together on a developmental edit of the story.  Jarrett was on board and the two of them worked closely together over several weeks to fine-tune this story of faith, redemption, and new beginnings.  The result is today’s featured post, which we think you will thoroughly enjoy.  We caught up with Jarrett and Michael to ask them about their working together and what it all entailed.  Here’s our interview with author and editor to go along with Jarrett’s fantastic story—happy reading!

FC: Jarrett, where did this story come from; what made you want to write it?

JARRETT: I read a story in one of my favourite literary magazines in order to prepare for a short story collection I’ve been putting together these last few months and decided to use a story in that magazine for inspiration. It was written by Jess Taylor, a Canadian writer whose work I really enjoy, about the relationship that a young woman had with a more complex man that challenged her and left her entirely dissatisfied because of the psychological woes that come from being in a relationship. So, I thought, all relationships have their various psychological woes, their trials and tribulations, and I wanted to write a story that added to this idea, and presented the idea of what draws people to each other, and what exactly are the laws of attraction, and are they foundational or subjective. I decided to write about a guy who was raised in a religious household who fell for a girl who was axiomatically his opposite. He’s religious and she’s not, and yet, there is an underlying truth they both share, and it is the protagonist’s journey to find out what that truth is and how it can heal their relationship. There’s so much that draws people together and even more that keeps them together, sometimes for the wrong reasons. When a person is right for you, as the old saying goes, you’ll just know—when you know, you know. This is a story about how you know.

FC: Michael, what initially attracted you to this story and made you think it was a good candidate for a developmental edit?

MICHAEL: Thematically the story really had something to say—how do we reconcile all the different influences and belief systems in our life and find meaning, particularly when we know we’re going wrong.  A story about a protagonist trying to know himself better and find a meaningful way to live is pretty universal.  Jarrett had found great ground to explore.  Structurally, the initial draft needed a little reorganizing; some elements needed foregrounding and others fit better as background or subtext—but without a doubt a compelling story was there and that’s what pulled me in.

FC: Jarrett, had you ever worked with an editor before; what were your thoughts about having an editor look at your story?

JARRETT: I most certainly have, but none were like Michael.  He was supportive, kind, and had this story’s best interest at heart from the very beginning. Yet, none of this would have happened without Jack Rochester. The process began with Jack, who initially told me that he liked this story, but was going to pass on it because there were some points that just weren’t hitting home with him. I wasn’t willing to give up so easily, and so immediately after, I told him that I was willing to make the changes, and being persistent, I managed to get in touch with Michael who assured me that he would help the story along.  Michael and I connected and he provided solid feedback that was not only helpful, but it lent perspective to the narrative that I hadn’t previously considered.  I also write comics, so collaboration is key in that process as well, and with Michael, he was open, clear, and very understanding.  Working with editors can be strenuous for some writers.  For me, like I feel in comics, I just like hearing from other creative people, and in Michael’s case, it was sublime.  I hope to work with him again soon.

FC: Michael, what was your approach to Jarrett’s story?

MICHAEL: From Jarrett’s initial draft I knew he had the talent to write a strong story, so my goal was to highlight some vital structural elements and how to strengthen them, and then stand back and let Jarrett’s craft do the work.  As an editor I may be a little biased but I think all writers get to a point in the process where they need that outside help, and hopefully it comes from a skilled editor who can not only identify how and where to strengthen a piece of writing but who can also give specific feedback that makes it instantly clear how a certain suggestion can improve the story.  I tried to offer that type of actionable feedback and then let Jarret do his work.

FC: Jarrett, how did your story evolve during the process?

JARRETT: It really began to become clearer.  Clear is something I always despair over during the writing process.  I don’t want to bombard my reader with my message, but I want them to see it as it slowly begins to take shape.  Michael provided a lot of assurance in this area.  Together, he guided me through the process, providing constructive feedback, and noting where themes were obvious and where they could be hit just a little bit harder.  Also, Michael noted where I’m doing too much writing.  As a former MFA student, my weaknesses as a writer were consistently noted, almost all of them pertain to too much too often.  Now in my writing, I try to trim where I can, but it was Michael who showed me where and how to do this.  The story grew stronger as a result, and because Michael had such a firm grasp of the story, together we managed to tighten, deepen, and in some areas make it a little lighter, a little easier to digest which is always a good thing.

FC: Michael, how did you and Jarrett work together?

MICHAEL: The first step was I reached out to Jarrett to see if he would be interested in this collaboration and he was as excited as I was to work together.  And the rest of the process was fairly straightforward – Jarrett sent me drafts and I sent back a markup and some comments and we got on calls to discuss the edits.  The calls are usually the most important part of the process – they let us get to know each other, talk in longer form about the story and our perspectives on it, and really let us bounce ideas off each other in rapid succession.  Finally, we went through a draft and both agreed we had gotten the story to exactly where it needed to be – we knew we had made it to a really strong finished story.

FC: Jarrett, what changes did you end up making and why were they important for you to make?

JARRETT: I started to think about the characters of Blake and Samantha. They began as two totally different people: Blake raised as a conservative Catholic, though progressive and aware of his reality, and Samantha an irreligious drug addict—somehow they found each other in a world where they could not be farther apart. Michael encouraged me to ask more questions pertaining to their relationship, which from an editorial perspective is always a good idea. He desired clarity and depth, and I am always interested in providing deeper reasoning, and he also wanted me to consider character choices. If Blake is so seemingly moralistic, which is a strong word indeed, then why would he do this; or, if Samantha’s so carefree, wouldn’t she do this instead? As a writer, I love being challenged, both in terms of tackling new characters and new stories.  I also love when someone considers the story as much as I do and wants to see things under the same lens as myself.  I felt like all of these things were important to consider going forward, and no, I couldn’t have done it without Michael’s help.

FC: Michael, what do you think of Jarrett’s finished story?

MICHAEL: I love the story.  I thought it was great when I first read it and I think that in this final version Jarrett has really fulfilled the potential of his initial drafts.  I always liked how the story and the author didn’t shy away from exploring moral questions and showing how transformative sincere introspection and moral courage can be in one’s life.  Jarrett explored raw material that is rich and profound and delivered a great perspective on it.  I think The Fictional Cafe’s readers will love it and find thematic significance in the story’s character and events.

FC: Jarrett, how do you feel about your finished story?

JARRETT: I definitely feel satisfied.  As a writer, I don’t think that you ever feel entirely satisfied.  I am always reluctant to read my work aloud, but I try to whenever I submit any stories.  I think this story was processed, thoroughly examined, edited, and plucked and pulled more than anything else I’ve ever written, and I say that with a great degree of gratitude.  Michael was instrumental in giving this narrative real shape, honing every one of its themes, and giving it more emotional weight.  I feel great about how it turned out, but I feel even better that it’s with The Fictional Café. This a great publication, filled with great writers, and run by some very wonderful individuals, and the fact that I persevered, and I was allowed the opportunity to persist, makes me so glad that this story finally found its true home.  I hope it will not be the last one published here.  I have plenty of stories to tell and I hope to find a place for them here, in the future.

FC: Jarrett, what do you want the reader to take away from your story?

JARRETT: In the end, we’re all just people trying to find our own truths, find connection with others, and, as a writer, and a Catholic, I am fascinated by trying to find alignment, in terms of who we choose, why we choose them, and how people intersect, and how our beliefs, though indoctrinated at an early age, do not always define us.  Knowing is about giving readers a glimpse into this idea.  With eyes and mind open, you will see direction and thus, you will also see hope too; hope that we’re not so different, hope that we can live in new places, with new people, that we can be touched by our own personal type of faith but not be solely driven by it.  What that all adds up to is something you can’t quite explain—when you know, you just simply. . .know.

To read Jarrett’s work, check out his website and his short story on FC.