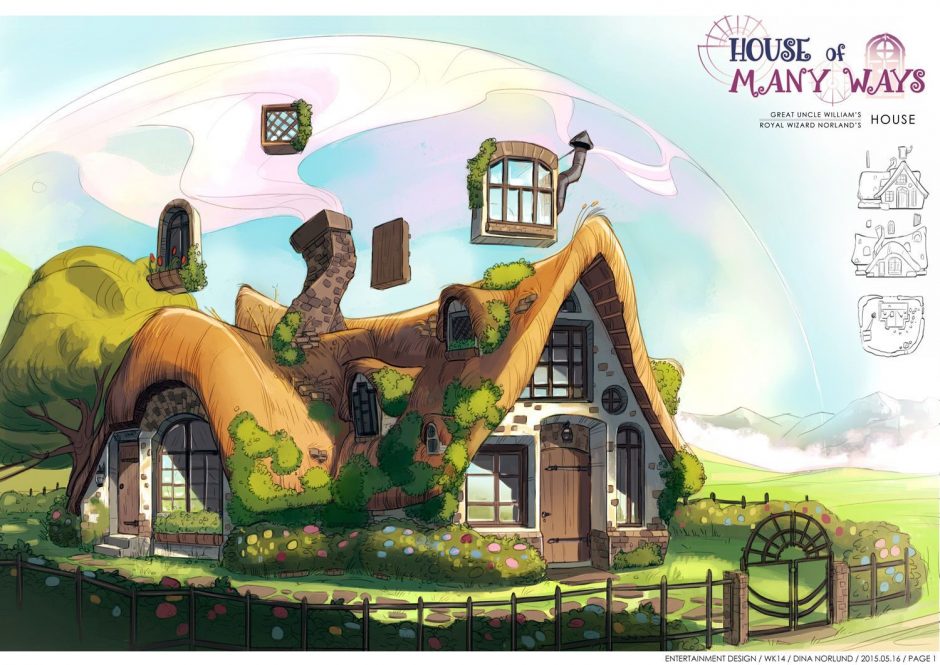 Hello and welcome back, Fictional Cafe listeners! It’s time for the House of Many Ways by Diana Wynne Jones. Since so many people enjoyed Howl’s Moving Castle, I thought it would be fun to pull up another epic from the hands of the same gifted author.

Charmain Baker has led a respectable, and relaxing sheltered life. She has spent her days with her nose in a book, never learning how to do even the smallest household chores. When she suddenly ends up looking after the tiny cottage of her ill Great-Uncle William she seems happy for the adventure, but the easy task of house-sitting is complicated by the fact that Great-Uncle William is also the Royal Wizard Norland and his magical house bends space and time.

Though she is supposed to clean up the mess William has left the house in, Charmain knows next to nothing about magic, and yet she seems to work it in the most unexpected way. The house’s single door can lead to almost any place – from other rooms like the kitchen, to faraway places like the Royal Palace, and even other time periods. In her first days in the magical house she ends up looking after a magical stray dog named Waif, encounters a horrible lubbock, has to share a roof with a confused young apprentice wizard named Peter, tries to work some spells from William’s library, and deals with a clan of small blue creatures called Kobolds.

When Charmain is caught up in an intense royal search to remedy the kingdom’s financial troubles, she encounters Sophie Pendragon, her son Morgan, a beautiful child named Twinkle, and their fire demon Calcifer. One of the messes Twinkle gets Charmain into results in Twinkle climbing onto the roof of the Royal Mansion. She is soon involved in curing the kingdom of its ills and rediscovering the long-lost mystical Elfgift.

I hope you all enjoy The House of Many Ways as much as the How’s Moving Castle, and if you wish to find the rest of Diana Wynne Jones’ books, you can find them on Amazon.com and AudiobooksNow. I will be posting something new in two weeks at 7 PM EST, so make sure to check the Audio Arts page. And don’t change that dial!