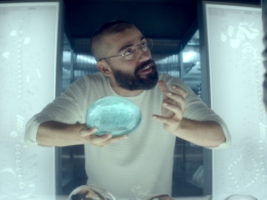 The box-office success of “Mad Max: Fury Road” [reviewed by Jason] and “Ex Machina” is the quintessential personification of lowbrow versus highbrow films. We Americans – indeed, most of the world, civilized or no – love both types. I have come to pick up Jason’s gauntlet and praise the latter film, but not at the expense of the former, for I, too, loved them both. And as writers and artists and students of the craft of storytelling, so should you.

“Ex Machina” begins by celebrating the brilliance of the creative lions of Silicon Valley, in this case Nathan [Oscar Isaac], and the wonders of technology, like the Google-like empire he has built. Yet Nathan is now, not unlike Thoreau, retired to the woods to contemplate his next brilliant move, for nothing less than topping his earlier triumph will satisfy this monstrous ego. And so it is to artificial intelligence and Singularity-enhanced robotics he turns. Nathan invites Caleb [Domhnall Gleeson], who works for his company, to his retreat in order to effect a cutting-edge Turing test – which is the computer, which the human – a test for which he already knows the outcome. Turns out it’s really another sort of outcome Nathan anticipates, and attempts to pull those peculiar puppeteer’s strings, but I don’t want to go all spoiler on you.

The story unfolds with extraordinary sensitivity and suspense, thanks in great part to the cinematography of Rob Hardy. Every writer reading this, take note. The pacing never churns and scenes fit together like a composite puzzle, each revealing enticing details that give nothing away but instead create the viewer’s ever deeper engagement. I wasn’t bored once, even as I watched the film a second time; on the contrary, I became much more aware of how skillfully the story was told, both in script and on camera.

A subtle, core idea which might sneak by you as you sit munching your popcorn, mesmerized by the beyond-beautiful creation called Ava [Alicia Vikander] and the seven Turing conversations that unfold between her and Caleb, is this: Is Ava alive? I mean living, like other forms of life? She thinks. She has feelings. She’s capable of individual action promulgated by her own thoughts, including self-preservation. Are these not some of the basic tenets of life, whether it is animal, vegetable or computational? Ava feels confined in Nathan’s beautiful cage and longs to see what life in the Big City is like. Isn’t this wish for freedom and growth through experience yet another manifestation of a life form’s desire to remain alive?

I can recall “Ex Machina” vividly, scene after scene, but I only remember in vague generalities what went on in “Mad Max: Fury Road.” That said, both movies could be boiled down to the same theme – the individual’s desire to live, to be free. Not a new notion, to be sure, but to witness its power, all you have to see is one or both of these excellent movies – or a single leaf of grass growing out of a massive bald chunk of shale.

Life compels, and is compelling, whether it is driven by testosterone or thought.

Jack is a barista at the Fictional Café.