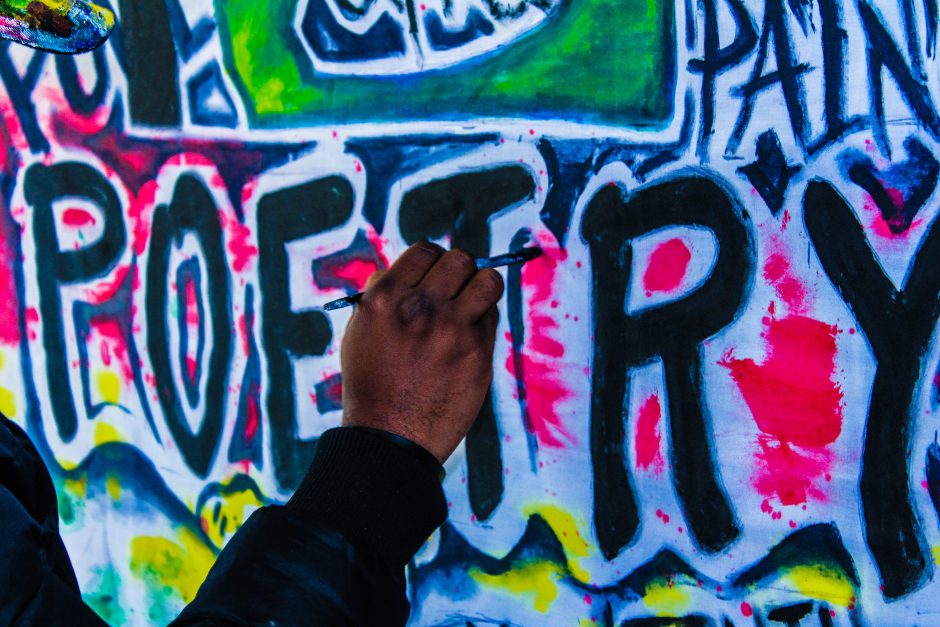 The Academy of American Poets launched National Poetry Month in 1996 to increase awareness and appreciation of poetry. Celebrated every April, it has become one of the largest literary celebrations in the world.

To celebrate the twenty-sixth anniversary of National Poetry Month, we are honored to introduce the amazing poets featured here. Please read their works and support their ongoing projects.

Some ways you can participate: write a poem, listen to a poetry podcast, or buy some poetry books (from our list of poets or others you discover).

Every card I put on the table,

you take away in plain sight.

At the flop, you say I don’t

Too many cards for my

At the turn, you say

people will hurt me then

kiss me while you

At the river, you lay down

a full house and pocket

the winnings with my assets.

I say nothing, hoping someday

the cards will turn in my favor.

It hasn’t so far but I still

two-year old who is told

Santa will bring her a toy

if she’s a good girl.

You’re happy when you win

and throw a few crumbs my way.

I lap them up thinking

I’m lucky and tell myself

I’ll beat the next game.

I’ll win the next one.

I won’t let you hurt me.

I’ll stand up for myself.

Somewhere along the way –

Definitely at the turn

Before I get to the river.

me of gold, illuminated by

She has three marks against her:

one more, if they believe she’s educated,

but fat is the one that’s sticky and stings.

She can’t shake it, and everyone

asks why she can’t

what she’s protecting herself from.

buttered biscuits and syrup, homemade
back and forth banter of kitchen prep aides
and kitchen smells, which
drifts and lingers into the den—
taunting e
v
e
r
y last one of them

But, long ago the kitchen’s been closed.

Dinner at 2 pm. Supper much, much later than…
The crack of dawn rooster alarm;
made the meals to get their move on.

The kitchen smells from her stirred pots
of dumplings and turnips and deer that granddaddy got.
The kitchen held the heart of the family home.
Sad to see it all alone.

Long ago the kitchen’s been closed.

The children, now, have kitchens of their own.
Where they make the macaroni and the potato pone.
They laugh and banter about olden times
and allow their memories to drift awhile.

Her hands, maestro movements, as she stirred the pots.
A pinch of this; a dash of that.
Recipe abandoned; it’s locked in her memory.

Long ago, the kitchen’s been closed.

The kitchen smells from the stirred pots.
The dinner at 2; the supper much, much later…
The hands, that picked cotton, molded dough,
and filled their bellies,
until they were as “full as a tick”.

Sad to see it all gone.

Only the kitchen walls remain…
Standing as the final witness.
And, the electric stove that,
probably, feels abandoned.

“My Room Has Digested Me”
Nina Kossman

Like Jonah in a stomach of a giant fish,

I sit in the stomach of my room.

and wherever I turn,

I turn to the right – more junk.

My room has digested me and spat me out,

it has taken everything out of me,

its flesh – our succulent dinner,

its skin – our boots,

its stomach enzymes – our oh so yummy Parmesan cheese.

Let the room digest me as much as it wants.

It’s time all of us were spat out

by this once-upon-a time lush and livable planet

as fair payment for turning it into junk.

My skin is the colour of

A poppy that shifts crimson through white blades

Bleached by the polish of an architectural twilight

The nudity of open lilies scandalises and screams theatrically

I am the illness of a whitewashed wall- well-spoken

Godlike; the value clings to the damp basement of my eye

Denying the glossed fringes of Sangria

Was so beautiful to me

In the warm light of a frosted tomb- she met her other, a daughter, a lover

She arose like crystalised coffee from a dark valley

They never believed we’d rise like her from those hills

Cascading in a thousand languages beyond her abbi

I drew a backbone with a pencil of morning light

And her shoulders split; and her skin tore; and her mouth consumed

Shrouded in the cinnamon-coloured morning

Dressed in the pale tendrils of dawn, she did more than speak

We are emancipated, when the sun and moon eclipse

As your back is turned; our silhouettes align

My skin is the colour of Venus; eyes ringed with healed bones

And a thousand ways you pretended to want me.

My 4th grade self, watched

as they held the door

so that he couldn’t join us outside.

as they screamed, “Baby Davy”

through the glass next to the metal door they held.

Too afraid to intervene.

I watched as his pounding on the door

and cut his fist.

That’s how I knew.

Yong is the author of Observations Through Yellow Glasses, Rising, Sometimes We Fall, and The Escape to Candyland. She was a finalist in The Restless Books Prize for New Immigrant Writing, Southern Fried Karma Novel Contest, Gemini Magazine Short Story Contest, The Writers’ Mastermind Short Story Contest, and The Sexton Prize for Poetry.

Yong’s YA novel, Camp Detroit, will be published in 2023.

After a messy divorce from music, West fell into a torrid love affair with writing. They’ve been somewhat happily married since 2013, when her first novel was published in partnership with Schuler’s Books & Music Chapbook Press. West graduated from Grand Valley State University with a Bachelor’s of Art in Writing in 2011 with an emphasis on fiction and poetry. Since then, West has self-published a handful of novels and collections of poems that tackle themes of love, redemption, cultural identity, social issues and the afterlife. She is the 2022-23 Fictional Café Poet-in-Residence. West resides in Michigan with her family and can often be found reheating the tea she forgot she made or reading a good book. You can find her work on Amazon.

Georgia Iris Szawaryn is a Writing Arts graduate student at Rowan University in Glassboro, New Jersey and is simultaneously working on two novels. Her work has been published on Flora Fiction, Silent Mayhem, Reservoir Road Literary Review, and YAWP Journal. To read more about her journey as a writer, visit her website.

Marcía Lynn Paul has been writing poetry and other works since she was six. At nine, her first poem, Pacer Proud, won the state Peanut Butter Press Contest for her age group/division. Majoring in Slavic Languages & Literature and receiving her Master’s degree in Secondary Education, she spent over a decade teaching English, writing and Language Arts at the middle and high school levels.

Currently, she’s working on several works, including a screenplay, a drama, and a romantic comedy. A selection of her poetry can be seen on her YouTube channel.

Her spirit animal is the tortoise, her favorite weekday is Tuesday, and her favorite color is cobalt blue. She hopes to someday retire somewhere near the ocean and dreams of owning a “brick and mortar” bookstore.

Whirlwind of Mosaic Pieces is her first collection of poems.

Nina Kossman is a bilingual writer, poet, memoirist, playwright, and translator of Russian poetry. Her short stories and poems in English have been published in journals in the United States, the United Kingdom, and Canada. Among her published works are three books of poems in Russian and English, two volumes of translations of Marina Tsvetaeva’s poems, two collections of short stories, and a novel. For Oxford University Press, she edited the anthology Gods and Mortals: Modern Poems on Classical Myths. Her writing has been translated into French, Greek, Japanese, Dutch, Hebrew, Danish, Persian, and Spanish, and she is the recipient of a UNESCO/PEN Short Story Award, an NEA translation fellowship, and grants from Foundation for Hellenic Culture, the Onassis Public Benefit Foundation, and Fundación Valparaiso. While Nina’s native language is Russian, she has deep ties to Ukraine and Latvia: her maternal grandparents and great-grandparents lived in Ukraine, and her paternal grandparents, in Latvia, where they perished in the Holocaust. She lives in New York.

Charlotte Tweed is a white, English writer from London who is currently studying a Masters in English at the University of Lincoln. She has two voluntary jobs, one on a market stall and one at a food bank, and is a poetry editor for The Lincoln Review. She is twenty-two years of age.

A love of writing began very young and was fostered in school for Tracy Strating when a new teacher encouraged her to enter a contest she won.  She is fascinated with words and writes daily as a form of therapy and connection.  Now her gray hair and full notebooks are a comfort. Tracy left the mountains of Colorado years ago and now and resides with her beloved partner and spotted dog near Lake Michigan.