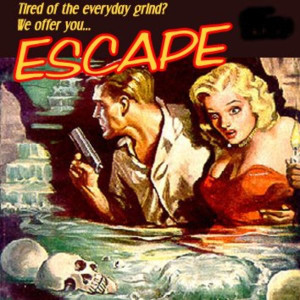 Courtesy Art of Manliness. Click the link below to hear other “Escape” episodes and more.

Few readers have ever read Francis Scott Key Fitzgerald’s short story, “The Diamond As Big as The Ritz.” Even fewer know it was broadcast on an old-time radio show called “Escape” which ran for several years in the latter 1940s and early 1950s. And even fewer know it was broadcast three times, with three different casts, on “Escape” in 1947, ’48, and ’49. Sam Edwards stars as John T. Unger and Nina Columb as Kismine.  Enjoy a light-hearted fantasy thriller by an author from whom you would not expect such a tale!