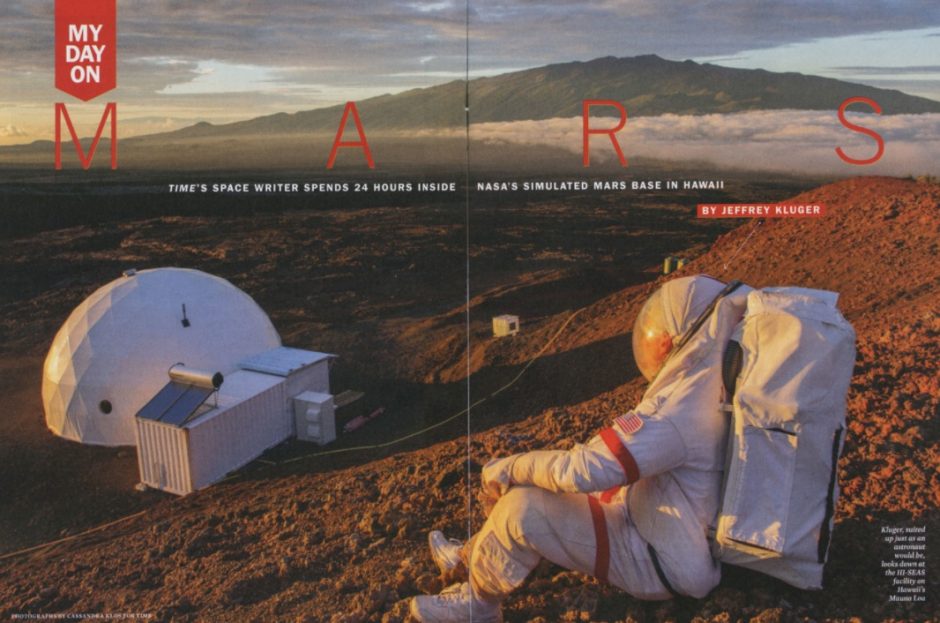 Thanks to Creative Nonfiction Barista Rachael Allen, Marketing Barista Mike Mavilia and Visual Arts Barista Steve Sangapore for their collaboration, putting together the following brief but interesting art feature and calendar of literary and artistic events around the country.

We kick it off [thanks to Mike and Steve] with an in-depth look at a photographically simulated expedition to Mars, which itself is a simulation.

And while admittedly only a small sampling, Rachael hopes “So You Don’t Miss It’ stimulates you to be on the lookout for similar events where you live. One of the worst feelings is learning a George O’Keeffe exhibit or a reading by Kristin Hannah was in your town—yesterday.

Lucky Bostonians will have an opportunity, starting tomorrow, to see the extraordinary photography of native New Englander Cassandra Klos. Entitled “Cassandra Klos: Mars on Earth,” it promises to be out of this world [oh, what a bad pun].

What: Photographs of 45 days spent in a Mars simulation in the Utah desert. “I want this work to be a portal for the audience—to allow them to step into this fiction, this simulation, this virtual reality,” Klos says.

Why, or The Artist’s Statement:

We are inundated with information about the cosmos, whether it is the appearance of water on a different planet or landing our man-made satellite on a comet. It is clear we are awed by this celestial imagery we cannot comprehend, and yet this unknown contributes to a need for exploration past our comfortable 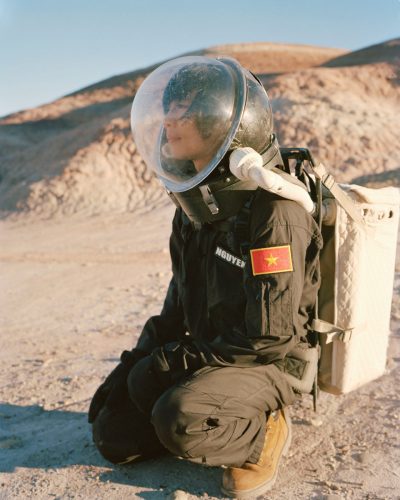 bounds. The interest of expanding the human race onto the planets around us is not a new concept, but only since the last few decades has the scientific community truly explored the idea that our neighbor planet, Mars, may be more like Earth than we ever considered.

With prototype space suits and diets consisting only of freeze-dried food, people from around the globe are dedicating weeks to months of their lives simulating the Mars environment to further the study of leaving Earth behind. To most of these pioneers, their only wish is to be a small part of the geological, biological, and psychological research that will propel us to the cosmos. Simulation sites such as NASA-funded Hawai’i Space Exploration Analog and Simulation (HISEAS), the Mars Desert Research Station (MDRS), and the Human Exploration Research Analog (HERA) create a simulated experience that blurs the line between reality and fantasy; a realm where the air is unbreathable, contact with loved ones is limited, and the dependence and cooperation of your crew members becomes center focus.

What’s perhaps the next best thing to participating in these NASA experiments? How about a trip to the Kennedy Space Center in Florida for the “Journey to Mars” exhibit.

So You Don’t Miss It

If you’re in San Diego on March 1, listen to André Aciman discuss his novels Call Me By Your Name and Enigma Variations at Warwick’s bookstore. Call Me By Your Name, Aciman’s award-winning love story set in northern Italy, has become an award-winning film directed by Luca Guadagnino—and potentially Best Picture of the Year. Tune in to the Oscars on March 4 to find out which book-turned-movie make the cut.

If you’re in New York City on March 15, head to the New School for the National Book Critics Circle Awards ceremony. It’s open to the public (as is the finalists’ reading the night before). From nonfiction to fiction to poetry to reviews, so many exceptional writers are up for recognition. Some standouts: Jesmyn Ward’s Sing, Unburied, Sing, Arundhati Roy’s The Ministry of Utmost Happiness, and Roxane Gay, Hunger: A Memoir of (My) Body.

If you’re in Boston on March 25, take your family to hear Junot Díaz read from his first children’s book Islandborn at the Boston Public Library. The Pulitzer-prize winning author of The Brief Wondrous Life of Oscar Wao, has brought his exception talent to a new audience with the publication of this picture book, which follows young Lola as she learns about The Island (the Dominican Republic) that her family immigrated from when she was a baby. Díaz is touring around the country with Islandborn, so check out his other tour dates and locations to find one closest to you.

March is a big month for literary festivals! Listen to Patti Smith, Meg Wolitzer, Tom Perrotta and Anna Quindlen at New Jersey’s Montclair Literary Festival March 15 through 18. Other options include the Virginia Festival of the Book and Tennessee Williams/New Orleans Literary Festival (apologies, this last one you have to purchase tickets for) March 21 through 25. And there may still be time for you to attend the 2018 Association of Writers and Writing Programs (AWP), one of the largest conferences in the U.S, in Tampa, Florida, March 7-10. Keep a sharp eye peeled for Founding Barista Jack traipsing around this one. He’s the guy wearing the Fictional Café baseball hat. More info at AWPwriter.org

Wherever you are, on March 2 stop whatever you’re doing and pick up a book for National Education Association’s Read Across America. In honor of Dr. Seuss’s birthday, this day works to get the entire nation of children (and adults) to celebrate reading, something we could be doing every day. And, in preparation for April’s poetry month, read and share (in person or through social media) your favorite lines of poetry on March 21 as part of UNESCO’s World Poetry Day.

For more events, check out your local bookstore or calendars like this one or this one. Get out there, people, and have a cuppa creativity!

If you enjoy this feature, please leave us a note in Comments and we’ll keep doing them for you. Be sure to let us know any special wishes or preferences, and where on the planet you live (our members reside in 38 countries) so we can try to find interesting local resources for you.