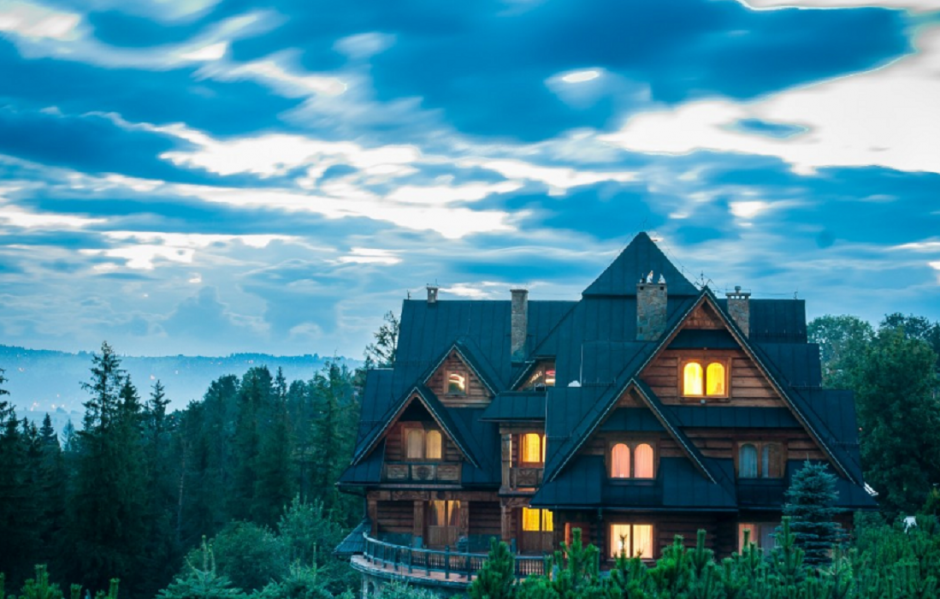 Editor’s Note: We’ve been honored to publish Dan Coleman’s “Professor of Death” short story which, due to its length, has appeared in three parts this month: Part I, Part II, and herewith, the final chapter of the author’s triptych. Please read them in order for full appreciation.

Robert dressed in dark clothes and arrived at the banker’s estate in the East Hamptons just after 2:00 a.m., Friday, the day after Thanksgiving. The site was secluded off a main road and down a winding lane. He surveyed the area with night vision field glasses. Except for a subtle breeze and ruffling leaves, all was calm, the sky moonless, overcast, therefore pitch black. Very good conditions. He exited the car near the gate and blew the dog whistle several times. No dogs on the estate at least. The grounds were about five acres surrounded in front and on sides by a rambling stone wall with wrought iron fencing and eight-foot hedges in spots for privacy but was easily crossed. The mansion, a white bi-level Greek colonial colonnaded on front and sides, was set back from the road, and security was virtually non-existent. Amazing. So lax. Very strange for a man in his position, extraordinary for a man with enemies.

Penetration into the house was simple, as promised, and he knew the layout from his kit. He went in from the veranda at the dining room. The house was dimly lit with nightlights throughout. He crossed the foyer and ascended the wide staircase to the second floor, moving casually as if he lived there, the .22 caliber magnum long-barrel pistol with sound suppressor held loose, confidently, by his side in his gloved hand. At the top, he turned left, stride unbroken, and walked down the long, carpeted landing to the door of the bedroom at the end where, stranger still, the banker lay sleeping, snug, contented, as quiet as babies’ breath. He’s either a stone-cold sociopath or he’s innocent as Bambi, Robert thought. Nobody sleeps that well if he’s alive. Robert chose the sociopath; he could never kill a Bambi.

He approached the side of the bed, stopped and stared down at him. Either him or me, he thought, a decision he hadn’t had to make since the war. Then he leaned over and put the pistol an inch from the back of the head. You are so right, Colonel. One of the easiest I’ve ever had. Just squeeze it off; nice, clean, quiet. The last one. Then go home, collect the money and go right on living a sweet, rich life, without ever having to do the dirty work again.

But Robert couldn’t. In an instant, it over-powered him. It was like a force that came up from his heels to his chest, all doubt cleansed from his body, an absolute knowing that he could not do it, a kind of sweet paralysis preventing him from acting. He straightened up, let the pistol down by his side. No, he thought. No, I don’t think so, Colonel. You can go to hell. I won’t kill this man, nor any other man, or woman for that matter, ever again for you and your stinking board. He turned and walked away as casually as he’d walked in, leaving no trace of his presence in the room, but carrying with him the heavy feeling of sickness and, simultaneously, the sense of relief. There would be a price to pay for this; he was a self-marked man.

On the beach road, two miles on the way out, Robert stopped at a deserted store and used a payphone to call the banker. If you’re not going to shortcut someone, why not give him a running chance, like the real noble s.o.b. you are.

“Good morning, Mr. H. Howell Ott,” Robert said. “I have something to tell you, and I want you to listen to me very closely, so try and stay awake. Your life depends on it.”

“Just listen. There are people who want you dead. They’ve paid a large sum of money for me to do the job. For my own reasons, I’ve decided not to. That’s why you’re not dead now. That means someone will be there soon to do it for me.”

“I was just there. Your house staff are gone. You’re wearing scarlet silk pajamas with thin white stripes on the sleeves and collar. Your penicillin prescription is on the nightstand. There is a black-banded watch, as well, and a picture of you and your estranged wife Hilgaard at the race track. She has a yellow orchid on her dress. Your bed is an early American, bentwood, and there’s a Band-Aid on your left index finger. I left your dining room door open to the veranda.” He could hear him on the end of the other end, sitting up, looking, thinking fast.

“What’s this all about?” He was now wide awake and concerned.

“I think I’ve already answered that. The question is what are you going to do about it?”

“What are you talking about? What are you, a burglar? You steal something here?”

“Are you involved in anything risky these days?” There was a brief, suspicious silence.

“I don’t know what you’re talking about. I haven’t done anything. What the hell’s going on?”

“If you are, in fact, involved in anything like this–in fact, even if you’re not—I suggest you take appropriate steps to protect yourself. Go to the authorities, or grab a bunch of money and head for the hills, or wherever it is you’d feel safest. But you’d better do it today, don’t wait. And don’t tell a soul.”

“You’re crazy as hell. Who’s trying to kill me?”

“You would know that better than I.”

“Who are you? How can I believe you? Maybe you’re the police. Or some crackpot.”

“Would I have been in your house tonight?” Robert could see him through the phone, nervous, looking around.

There was a pause. He was thinking.

“Listen,” Robert said, “I don’t care who you are or aren’t, or what you’ve done or not done. I’m just telling you the next thing you do better be quick. And you mentioned the police, not me.”

“Mind you, I’m not saying I’ve done anything wrong,” the banker Ott said. “But what’s in this for you? How do you figure in? You’re not a social worker.”

“Don’t worry about what’s in it for me. I’m as dead as you if I don’t find my own hole to crawl in.”

“I see,” he said, not very much the believer. “I see. Well, if this is true, tell me who it is, I’ll make it worth your while. You won’t lose a nickel. I’ll double what they’re paying. Triple, just give me a price and a name.”

“Sorry? What the hell kind of answer is that? Somebody’s trying to kill me, you say, and you won’t tell me who it is. I don’t understand. I thought you didn’t want me dead.”

“I didn’t say I was in love with you, either,” Robert said. “Whatta you wanna do, hang around together? Just take my advice and get out of there.”

He could hear the banker sweating on the other end, panicky, slipping away. “Sorry,” Robert said. Across the inlet, he could see, through the mist now forming over the water, a night light glowing from a tiny cottage. “Just remember ‘night light,’ in case we somehow survive and I need to communicate with you. Or vice versa. Keep your eyes on the New York Times and the Washington Post classifieds under ‘Help Wanted, Night Light Attendant.’ If that ad is there, there’ll be a number to call, and you call it.”

Robert knew there was always the chance the banker might say or do something stupid, or even intelligent, which might tip off the partners or the board, ostensibly, the colonel, sooner than Sunday morning, maybe even before he got back home. So, he would have to be cautious and move quickly.

He arrived home just before dark. His house was a luxurious contemporary built on a knoll a half-mile up the side of the mountain, with a panoramic view of the valley and the university and town below, and now the still brilliant colors of autumn, something he would normally enjoy in the cool air, with chilled wine or whiskey from the deck.

From the base of the mountain, Robert scrutinized his home with binoculars, then moved closer, driving carefully up the winding road, looking, until he was within rock-throwing distance, where he checked for anything unusual signifying unwanted visitors. Satisfied this far, he moved to the house and checked thoroughly, until he could breathe freely. Too jumpy, slow down.

He went into the library, his favorite everything room, and poured a whiskey on ice. It was a large but cozy room, expensive and masculine; sports equipment and memorabilia, certificates and awards, and finished in exotic hand-carved hardwoods and tooled leathers, and an entire wall-sized, lighted aquarium with expanded tank stocked with sea life, including a sand shark and rays. And a spectacular view over the deck. He stared at the phone until his drink was gone, then poured another and sat next to it in his favorite, stuffed leather chair and gazed out at the hundreds of tiny, colored lights flicking on throughout the darkening valley, almost certainly, he figured, the last such sight for him from this vantage point.

Then he called her.

“There’s something I have to discuss with you that can’t wait.”

“I think we’ve been through this, Robert.”

“I discussed things alone, with myself, and I’m in wholehearted agreement with me that there’s really nothing else to cover. I did that over Thanksgiving dinner, alone.”

“Actually, there’s a great deal to cover. I haven’t been honest with you. I—I do love you, but there are things you need to know. True, it might be best you write me off for your own good. My future doesn’t look very promising right now and it might get worse. You could get hurt being around me. But at least you have a right to know and ought to hear me out, while there’s time. It’ll clear up a lot for you. And for me.”

“Sounds very ominous, Robert, mysterious. Enigmatic as ever. So, what else is new?”

“Just let me see you and tell you about it. You won’t like it, but at least you’ll know.”

“How is your mother, Robert?”

“That’s part of it, Gail. There won’t be any more visits to Mother.”

“Please. I have to confess, to tell you certain things.”

She thought about it. “Will you promise not to talk in riddles?”

“I promise to shock you with the truth at the risk and likelihood of losing you forever. I swear.”

“You’ve already lost me at this point, Robert.” There was silence for a moment, then she said, “But the truth has always held an irresistible appeal for me.”