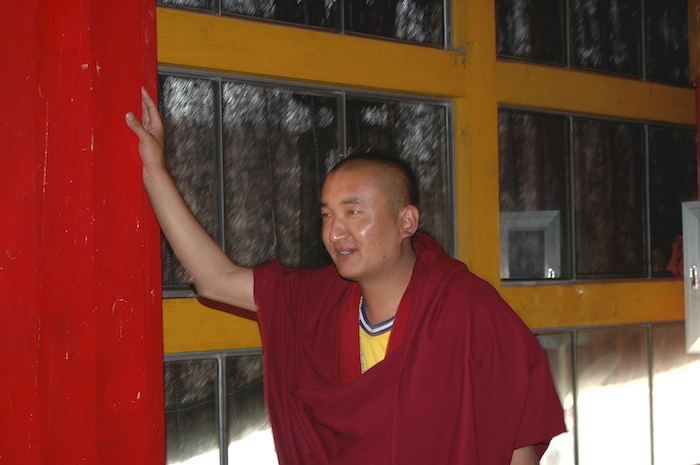 Editor’s Note: We’ve been honored to publish Ms. Raufi’s “Life” novella which, due to its length, has appeared in three parts this month: Part I, Part II, and herewith, the final panel of the author’s triptych. Please read them in order for full appreciation.

Samuel Blank/the one with the truth. Celestial morning sunbeams covered the Pacific Ocean. Soft, salty-smelling wind blew the papers Samuel held. He sat straight, looking at something on the horizon. I don’t know whether I’m going to miss this, he thought, but it really was an unforgettable experience—finally, everything is clear as this July sky.

He dropped his papers, and the wind blew them away. A young man, wearing black, caught the papers and tried to put them in order, his feet sinking into the soft sand.  The young man turned around.

“How did you know?” Thaed asked.

“Nice to see you,” said Samuel.

“Let’s go sit under that tree. This heat is going to burn my bald head.”

They both laughed and sat at a bench under the tree.

“These papers are blank,” said Thaed, checking them one by one.

“That’s the way they should be. Some things are hard to put on paper.”

They both sat quietly, watching the ocean waves in the distance.

“It always is,” said Samuel. “You want to know why I left everything and became a Buddhist monk?”

“Yes, indeed. That’s why I’m here, although I thought you would be older.”

They sat quietly for a long time. It felt like they didn’t have the right words to start the conversation. The silence spoke more, just like the blank pages.

Samuel was the first to break the silence. “Are you going to write what I tell you on the pages?”

“The question that kept me up at night was: If you were to die tomorrow, so what? What impact did you have on this world? I couldn’t take anything I’d worked so hard for with me. The money, the car—none of it. I couldn’t take any of those things with me. I wanted to get quiet, to detach from the physical world and develop an inner world. That was more important than material things.

“Impressive, man. So, you gave up everything?”

“Yes, I did. I went to Thailand to detach and self-reflect. I needed to determine who I was, what I stood for, what my values were, what guided me. Put simply, I needed to become a better human being, so I could be of service to this world. I had to decrease my ego a little bit and genuinely learn wisdom.

“When I arrived at the temple to check in, they took all my belongings. No phones, no computers, nothing. My wallet, my keys, everything was gone. They shaved my head and my eyebrows. They gave me a white shirt, white pants, and there you go. My identity was gone, and it was time to learn how to become a Buddhist monk.

“We woke up at four A.M. Our beds were yoga mats on the ground. It was uncomfortable, especially compared to the bed I used to sleep in, but that was what they were teaching us, to detach from worldly things and get back to the basics. The morning chanting started at five A.M and went on for about a half an hour, then we meditated for another half an hour. After that, we did our chores: laundry, cleaning the toilets, helping in the cafeteria, preparing breakfast, and cleaning the meditation hall.

“At seven AM, we had breakfast, and after that, we had the second round of meditating, which lasted about an hour. Then we had a free time until lunch, and at two o’clock it was time for meditation again. Then a teaching monk would teach us about Buddhism, about the world, about spirituality. After that, we had free time again until seven P.M, when we had the evening chanting and meditation again.

“It was difficult at first, because they didn’t serve us dinner. They believed we weren’t using enough energy through chanting and meditation to justify three meals a day. But my overall experience was amazing. Each day felt like a week, sometimes like a month. It’s strange, but time completely stopped. Without my phone, without my keys or wallet, it was just gone; the material world didn’t matter anymore. I remember putting on my robes for the first time and thinking, Holy crap, I’m not looking for my keys, I’m not looking for my wallet, I’m not looking for my phone. It felt so freeing.

“In a monastery or temple, the conversation is so different from what I was used to. It’s weird how in the Western world, when we meet someone for the first time, we always ask who are you? what do you do? where do you live? Those kinds of questions. But in the temple, the questions were different. How was your meditation? What good did you do today? What’s the plan for the future? They asked questions that had more depth to them. They weren’t concerned about what you did in the material world. It didn’t matter how much money you made. Who cares? Who gives a damn? They weren’t interested in that. What they really wanted to know was how you were going to improve yourself, how you were going to become a better man, and what good you had done today.”

“Why is meditation important?”

“In the monastery, we mediated a lot. It’s funny. In the Western world, we do five minutes of meditation. But when you go to a monastery, each session of meditation is about an hour or an hour and twenty minutes. During the day, we meditated about five to six hours.

“You know, we know how to clean our physical body. We take a shower when it’s dirty, but for the mind, we never shower it, we never clean it. A day is filled with emotions. We have anger, jealousy, greed, and delusions—and we never wash them away. The only way to clean our minds  is through meditation. Meditation is showering of the mind.

“The same goes for the mind. If you don’t meditate for a day, whatever, but if you don’t meditate for a week, your mind starts building stress, anxiety, worries, depression. If you don’t ‘shower’ for a month, your mind starts coughing. It’s funny that there are a lot of people out there who haven’t showered for years, decades. If you don’t shower your mind, you start thinking the same unhealthy thoughts over and over. Just imagine how clouded your mind is. This is why meditation is so important. It’s a clearing of the mind. It gives you the opportunity for clarity. It’s simple. When your mind is still and clear, you make better decisions, and you don’t waste time. You become more effective and happier, and that is where wisdom lies.”

“So, what was the best lesson that you learned?”

“I learned the two most important lessons: the world doesn’t revolve  around you, and the world is in you. I was the world. I was life. I was giving life to everything around me, not vice versa. Just one simple example: I called you here. I created you. I wanted this to happen. And I know who you are. I know why you’re here.”

“Do you really?” asked Thaed.

“Sure. I’ve met you before, but I believe this is going to be the last time.”

“What do you mean, the last time?”

“I’m tired, son. I’ve lived life for so long. I believed my purpose was to change the world, but the world doesn’t need to be changed. Everyone and everything is here to serve its purpose, in a harsh way. There is no easy way. I experienced it all, son—the hate, the rage, the misery, the hunger, the love, the loss, the revenge. Name it and I will say, ‘Yes, I did experience that.’”

“Did you feel regret?”

“That’s the third time you’ve asked that question, even though you know the answer. I did the right thing. In all my lives, I did the right thing. My impact might be invisible, but I’m sure someone was protected by my deeds. I don’t regret, son, because there’s nothing to judge my deeds. Everything that happened to me was the result of my decisions. If I made other decisions, I would have had a different kind of life, but it would have amounted to the same thing. All lives travel on approximately the same path. It’s all the same struggle; it’s just the amount of pain that differs.”

“Life gave me what I needed to know. Life is a war. Nobody and nothing can change it. We can spice it up a bit, put in some light and beauty, but no one can change its flow, circling in perpetuity. In order to survive, there must be war, but one day it will stop. We all become one.”

“We are one in the infinity of life. So, Thaed, I returned from Thailand and sold all my possessions, and I went in Africa and built an orphanage, because this world goes on creating mistakes.”

“Mr. White, there is one thing I’m going to miss. It’s you. When I’m gone, you won’t exist anymore.”

Mr. Blank stood and walked away without saying goodbye. The young man watched him with admiration, knowing that he’d finally found his way. When Mr. Blank crossed the street, a fast car hit him.

Thaed (Death) Whitethe young man wearing black–-was Death itself, accompanying them in their last moments. One soul, three bodies, three timelines and, at the end, again, they became One.

Burbuqe Raufi is an award-winning Albanian author and an avid reader.  Her first published book, Dr. Mind (Balboa Press), a self-help book based on her real-life experiences, gathered good and impeccable reviews from Amazon readers. Dr. Mind was published in Albanian as Fuqia e mendimeve and became a bestseller and won an award as the best book of 2016. Her most recent book is The Tavern: a Novella, a psychological and philosophical drama.  Bubuqe has also published short stories in literary magazines, including “The Old, the Young, and Me” (Literary Yard),and “Me vs Me: A Healing Journey through the Power of Thoughts (Positively Positive). She lives in the Republic of North Macedonia.