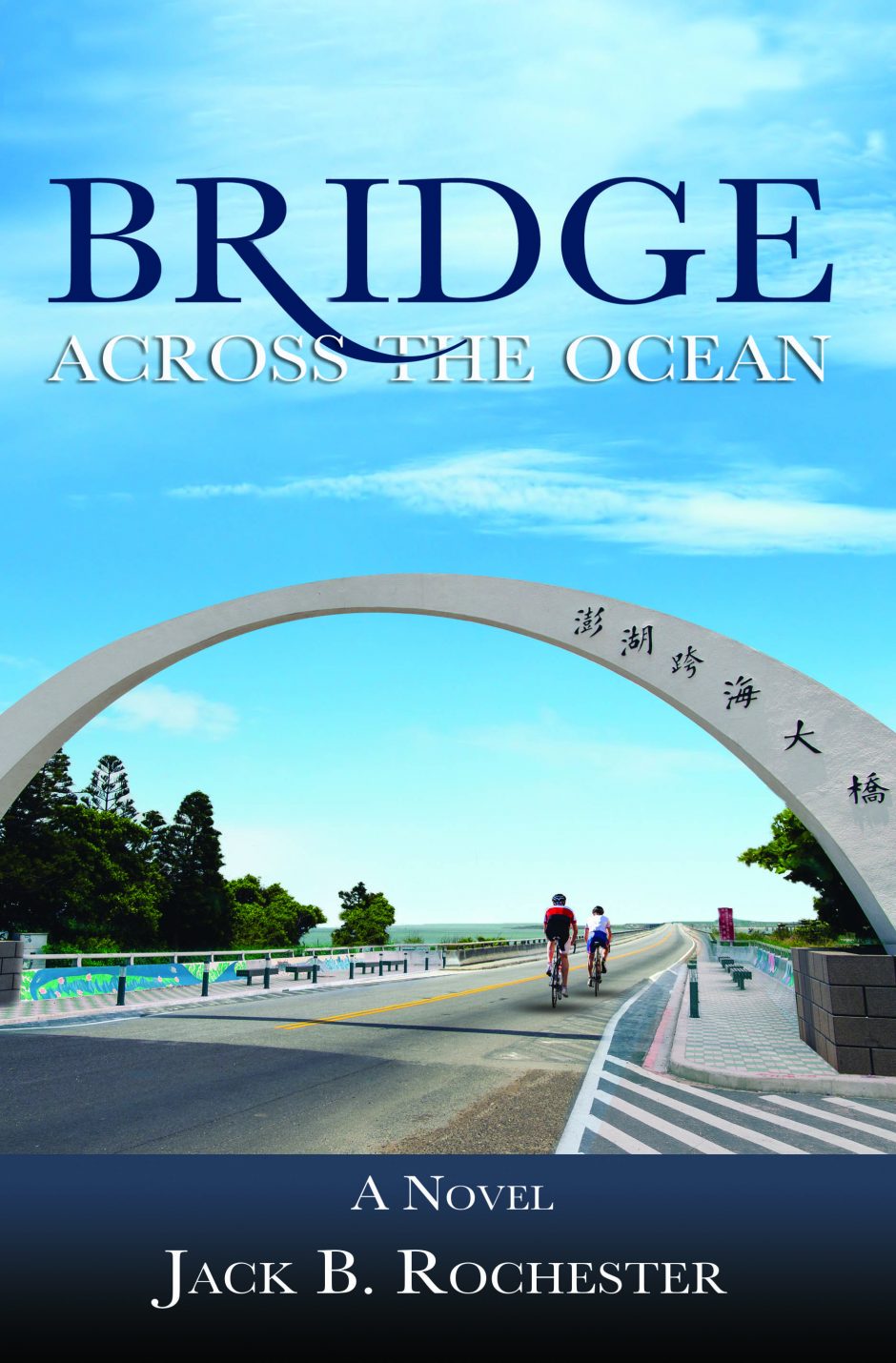 Today, we celebrate with Jack, our fearless leader, the publication of his new novel, Bridge Across the Ocean. He began writing it ten years ago, and needless to say it’s been through a few changes since then. Here’s a short synopsis:

Jedediah Smith, Luke Lin, David Bondsman and Rick Saundersson have created the most innovative bicycle drive in history: The Spinner, a technologically advanced device that produces and stores its own energy without using batteries. It’s 2011, and it’s ideally positioned for the just-emerging city bike market, and the world’s largest bicycle maker located in Taiwan is interested.

Just before they are to leave for Taipei, Taiwan, to discuss a licensing agreement with Joyful Bike, Luke is struck down while cycling and killed by a hit-and-run driver. Although heartbroken, the three friends decide to continue with their business travels, taking Luke’s fiancée Suzie Sun with them.

At Tokyo’s Narita International Airport, the group encounters two Japanese agents of business espionage who don’t know what they have, but nevertheless want to steal it. The “information worms” pursue the cyclists to Taipei, where the stakes grow even higher and a battle of espionage ensues.

The guys begin negotiations with Joyful’s director of business development, Jung-Shan Lai. She takes them cycling on Joyful bikes through Taiwan’s breathtaking scenery as they continue to thwart the attacks of the information worms. Jed promptly falls in love with Jung-Shan, and she with him.

Jack’s fourth novel portrays, as author John Gantz wrote in his review, as “the span of the metaphoric bridge across the ocean (with) one end in New Hampshire and the other in Taiwan.”  In so doing he explores four themes, portrayed in the following excerpts. Jack is donating all the royalties from Bridge Across the Ocean to the bicycle safety advocacy programs of the Massachusetts Bicycle Coalition.

Publication Party Tuesday, Sept. 14, at 7:30EST! You’e invited to join us tonight for “Bikes ‘n’ Books,” our virtual publication party, where you can meet the author and Galen Mook, president of the Massachusetts Bicycle Coalition, watch a video, and win a free copy of Bridge. Just click here to RSVP and get your invitation!

“Car back!” Jed Smith heard Rick Saundersson call out to the three cyclists in front of him at the same moment he heard the truck’s engine clanking away. Diesel, Jed thought, then it was past him, a massive white Chevrolet dually pickup with the New England Energy Cooperative logo painted on its door, a New Hampshire “Live Free or Die” license plate on its bumper. The big exhaust pipe growled as it spewed diesel smoke in his face. He held his breath. He watched the truck begin drifting to the right as it passed him, then David Bondsman, drifting, drifting toward Shieh-Seng “Luke” Lin. He’s gonna hit Luke! Jed thought, the words sticking in his throat as the truck’s big right-side mirror caught Luke behind the head, pushing him and his bicycle sideways, Luke struggling even as his wheels began to disappear beneath the truck. Its massive rear tandem tires spewed blood and made a sickening sound as they rolled over Luke and his bike, kicking a tangled mass of man and machine out in their wake. Jed swerved to the right, just barely avoiding his fallen friend. “STOP!” he cried, his voice that of a wounded animal, Rick and David bellowing at the top of their lungs. A whiff of diesel exhaust was the only reply as the truck picked up speed. “Nine-one-one!” Jed called over his shoulder. He took off after the truck, standing up to pedal as hard as he could, gulping air, feeling the lactic acid burn in his thighs. Jed could feel the wild pounding of his heart, the veins bulging out at his temples. His mouth twisted in pain as a keening cry left his lips: “Luke! Luke! Luke!”

Over the course of their studies, the six degrees of separation between the four young MIT students narrowed considerably. It was Rick who first got to know David from Sloan classes, but it wasn’t until the Pan-Mass Challenge cycling event that they all met for the first time.

The PMC is the premiere cycling event in Massachusetts, a two-day, two hundred-mile ride from Sturbridge to Provincetown at the tip of the Cape Cod peninsula. As a fundraiser for cancer, it drew thousands of riders each year from every level of proficiency, on bikes ranging from racing to cross to mountain. A few kids on BMX bikes. A guy on a unicycle.

It was on their PMC ride, noting how many of the bikes were in poor condition (not to mention vast numbers of their riders) that the four quickly became fast friends. They chatted about cycling problems they observed, in particular riders whose constant gripe was that the route wasn’t flat as a pancake. It soon turned into a grad-school case study, each applying their individual perspectives and expertise to inputting comments and complaints as variables into the greatest of all problem-solving tools, the what-if analysis.

As the miles rolled by, a solution gradually emerged: replace the conventional multiple-speed gear train with an energy-storing drive. There would be no shifting; the drive would have a logic circuit that released the stored energy to make it easier to pedal when climbing hills or to gain more speed on straight, level stretches. Jed realized they possessed the collaborative skillsets to devise such a gizmo, and that an untapped market—the emerging urban bicycle rental innovation launching in major cities, such as Boston—was theirs for the taking.

“What? Master, this is a lucky day, to find the Americans right across the street from our hotel. This is rokuyo!”

“No, fool, this is tradecraft. I have thought logically about our target and employed my knowledge to determine all possible outcomes. My intelligence-gathering experience made it clear we would cross paths with the target. All that remains now is to act on what we have learned.”

“We know there are three American men and two Asian women. One of the women is a leader of some sort. From the taxi dispatcher information last night, we can assume there is another possibly Asian man helping them. We also know from the dispatcher that they are lodging at the business inn in the Xindian District. We know their vehicle is the large American truck. We know there is the truck driver, who we may be able to exploit for our purposes. This big truck is a great mistake for them.”

“Because it is so easy to see and follow?”

“Hai, desu.” Yes, exactly. “If—when—we go to their place of lodging, we are likely to find this big truck parked there. This would confirm our assumption.”

“They must have the big truck for a reason, Master.”

“Fool! I just told you the reason. I am certain that within the big truck there is business intelligence. They likely think their assets are safe and secure in it. They may act as if there is nothing of value inside of it. They are foolish to think I do not know they have prized assets in their big truck that will soon be mine!”

Love between peoples and cultures

Jed parked in a nearby underground car park and, hand in hand, they toured the museum. “My people must have a history museum for everything!” she said. Outside again, they walked the path to the Beitou Thermal Valley, where they could look down upon the inviting hot mineral springs. People sat on rocks beside the healing waters, soothing their feet and their souls.

They walked into the familiar downtown area. “It is tea time, Jed,” said Jung-Shan, stopping. “Shall we go to this lovely Japanese tea room?” They entered the lobby of the Lotus Blossom Hotel. A waterfall, illuminated with thousands of tiny lights, shimmered down a stone wall from a second-floor balcony into a sinuous stone-lined channel flowing throughout the lobby. Jed stopped to look; large, colorful koi swam back and forth. He followed her into the tea lounge.

“To our wonderful day,” said Jung-Shan, touching her porcelain teacup to his. The china was so fine Jed could see the level of his tea through it.

“To you, for making it possible,” he said. “Xiè xiè, Jung-Shan. Hey, that sounds like a rhyme in a poem!” She smiled. “You are a poem, Jung-Shan, as lovely and interesting and beautiful as poetry.”

She looked down into her teacup. “Xiè xiè,” she said.

“I need to tell you something,” said Jed, pausing to gather his courage. “We haven’t known each other very long. And it’s been a long time since my divorce and, well . . .” He stopped, searching for words. “Well, I haven’t, you know, dated much. Because I just haven’t been interested in anybody, but—”

“I have fallen in love with you too, Jed,” Jung-Shan interrupted. Her eyes glistened with emerging tears.

He set his cup down before he dropped it. “Oh, Jung-Shan, I—I— really have fallen in love with you, too.”

“I know. This is why I asked you to spend this last day together, before you have to go back . . . home. I wanted to be all alone with you today for this reason. I want us to be together all day and all night, if that is all right with you.”

Sara Dykman, author of Bicycling with Butterflies, wrote in her review:

“We need stories like Bridge Across the Ocean to remind us that cycling is an act of vulnerability and an act of joy. Some readers will decide to one day bike through Taiwan. Others will daydream about breakthroughs in bike tech. Everyone will carry Luke’s story in their mind. I did all three because after all, as Joyful Bike’s CEO says, “The bicycle is my destiny.”

Son of the noted artist Jacqueline Rochester and US Navy Band trumpet player and drummer, Jack took the turn onto the path of writing and never looked back. In 2013, he and Caitlin Park started The Fictional Café, hosted today by nine Baristas and viewed by almost a thousand Coffee Club members in 67 countries around the world. He grew up in the Black Hills of South Dakota and in Wyoming, and today lives near to the Minuteman Bikeway in Lexington.

For a deeper look into the book, the author and ordering information, please check out the Bridge website, www.bridgeacrosstheocean. com or order on Amazon.