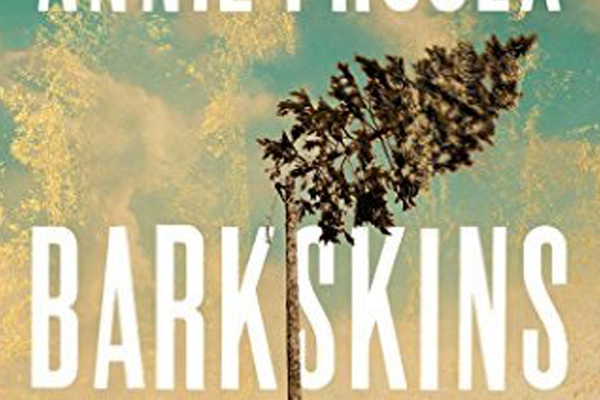 From The Shipping News to Accordion Crimes to “Brokeback Mountain,” Annie Proulx hasn’t written a novel or short story I didn’t enjoy. Proulx is a storyteller with a great depth of understanding for not just people, but environments both physical and emotional. One of my particular favorites is “On the Antler” from Heart Songs and Other Stories. It’s the story of a feud between two emotionally primitive men who live in the woods and have few means of expression, but seek revenge upon each other for crimes both real and imagined. A novel which lingers in my thoughts for its engaging thematic thread is Accordion Crimes. The musical instrument travels from hand to hand, place to place over a century, sometimes in danger and sometimes cherished, but never revealing its secret. Although Proulx’s works linger strongly in memory, I would read any one of them again.

Now comes Barkskins, a compelling story of the people who came to North America to clear the vast coast-to-coast forests of what is now Canada and the United States. This time, the narrative spans more than three centuries and never once lost my interest.

The novel, epic in length (over 700 pages), was utterly engaging over the two months it took me to read it (I’m a bedtime book-devourer). It begins in 1693 with two indentured Frenchmen named Rene Sel and Charles Duquet who become indentured lumberjacks. It traces them and their descendants’ various pursuits as barkskins into the early 21st century. Although fiction, it’s easy to see Proulx has done her homework: there is verisimilitude in characterization and time-place incidents that are clearly drawn from assiduous research. If you care to learn about the plot in detail, I encourage you to see the Wikipedia page https://en.wikipedia.org/wiki/Barkskins. Actually, I encourage you to just read the book.

Proulx writes with such vigor and incisiveness, as she always has, about the coarseness of life and its tribulations, without a narrator’s fairness or blessings or remorse. Her work often concerns the Northeastern United States and Canada, which are especially hard on people. This is particularly true of life in the New World for Sel and Duquet (the latter’s family will eventually change its name to Duke) as they disembark the ship from France to bushwhack through the dense forests of what is now Canada, a gazillion mosquitos attacking their faces and necks each step of the way as they slog through the mud and leaf mold and stumble over hidden tree roots.

Is this a “man vs. nature” story? Hardly. It is more pointedly “man vs. man.” For example, crews are enlisted to clear-cut, or denude, a piece of Maine land of its pine trees (for use as ship masts) with promise of payment once the trees have been floated down the river for passage to England. Yet they will never be paid since the landowner, who is part of the plot with the woodcutter, chases them off as trespassers once their work is completed. Or this: Having heard tales of the vast forests of kauri, a prized tree in New Zealand, a barkskin departs Chicago to greedily claim his share of them, only to be kidnapped by native Maoris and, well, that’s a spoiler alert.

In point of fact, lurking beneath all the people and events flowing through this novel is the issue of humankind’s lack of respect for, and conservation of, the forests. Proulx, ever careful not to proselytize, portrays this through Dieter Breitsprecher, who has married into the Duke family, and starts a project to replant vast acreage that’s been clear-cut. But as good or kind as some of these characters are, or as rapacious and greedy as others, in Proulx’s story no one gets out alive. There is no redemption or salvation, even for the trees. Barkskins is a book to carry you through the long winter nights ahead.