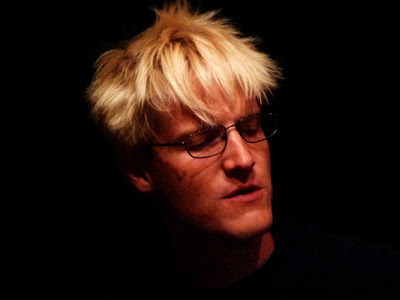 Blake Brasher is a visual artist working in mixed media painting and installation. His colorful abstractions are reflections on the nature of reality and what it is like to be a thinking being in a universe that is at once beautiful and terrifying.

Blake came to Cambridge to attend the Massachusetts Institute of Technology in 1997 and has lived in the Boston area ever since. Feeling pulled between the fine arts and the sciences, he earned a Bachelor of Science in Art and Design at MIT while cross-registering for painting classes at Harvard and doing robotics research at the MIT Media Lab.

While Blake would not mind earning fame and fortune from his artwork, his primary interest is in the work itself and in exposing his work to as large an audience as possible. He voraciously consumes art historical texts and contemporary art writings, and he desires nothing more than to be part of the conversation that is contemporary art. We here at the Fictional Café are pleased to introduce Blake to our conversation.

Please click on each image for a full-screen view.

I Just Want To Eat Food 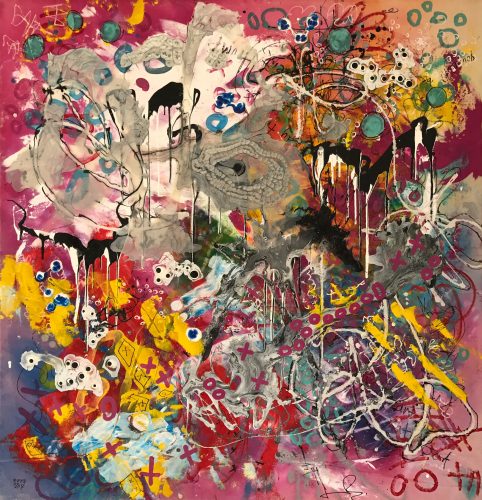 “My work is an exploration of the physical and spiritual nature of life expressed in color and movement. I believe the purpose of art is to help man find his place in the universe, and I consider a painting a success if it has a spiritual quality that draws people into a state of meditative contemplation.”

In Fact It Is Open Doors 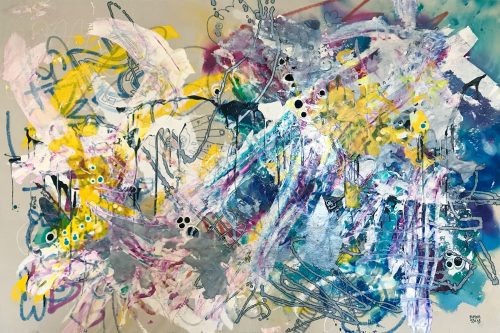 “When I paint, I tend to spend more time watching than actually making marks. I set events in motion on the canvas and watch as they develop. It is a process of tending and caring and occasionally culling and pruning.” 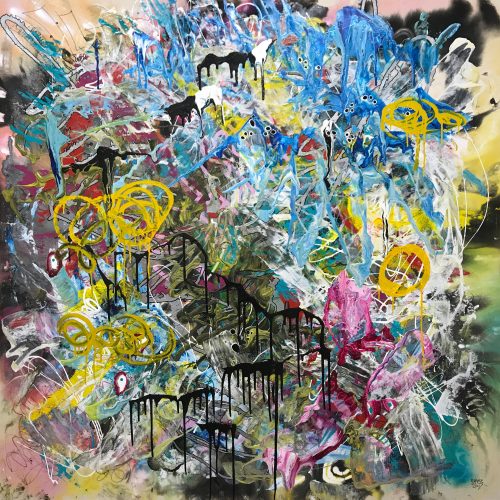 “My work is meant to be evocative rather than representational. I want to engage the viewer and bring to the surface the same sense of wonder you might get by looking at a sunset, the northern lights, a coral reef, or a star-filled sky.”

When Those Things Suddenly Alight 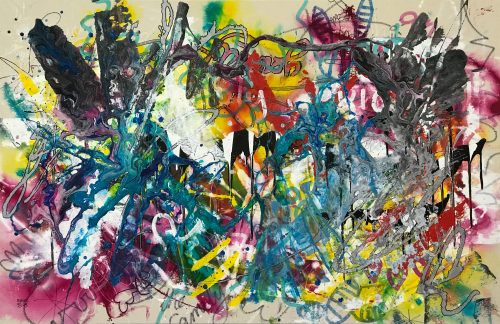 “My paintings are composed without linguistic thought; there are no words running through my head. The process is deeply subliminal. It is my goal to communicate with the viewer on that subconscious level.”

An Abundance of Epiphenomenal Qualia 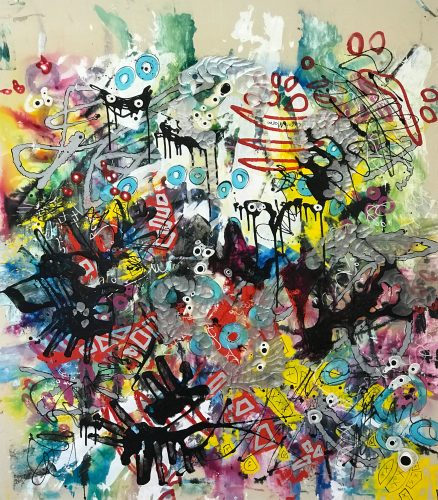 “My work has always been about exploring what can be done with a set of materials. A couple of years ago I was making paintings that were very busy, with tons of color and layers piled on layers. Then I went through a process of emptying the compositions out until eventually I was producing paintings that were quite minimal, but still complete. Having accomplished this, I gave myself permission to fill the compositions back up, throwing everything I have into them.

“I’m working mostly on un-primed canvas. I have a bolt of it in my studio and I’ll start out by unrolling a segment on my work table. The first choice is how big to make the painting, and I tend to like working large. I like to work on the un-primed canvas, without a gesso layer, which seals the fibers and is important to protect them against oils and solvents in oil paints, but is not required when you’re working in acrylics. You can get the pigments to really soak into the fibers by soaking them with water before applying the paint, and I appreciate the neutral base the cotton canvas provides. I’ve been incorporating text, doodling, and collage into my work, exploring ways these can contribute to abstract composition, losing their individual meaning as they are absorbed into the larger work. I’m mostly using acrylic paint, but also have been playing with some paint markers designed for graffiti artists and Sharpie markers.” 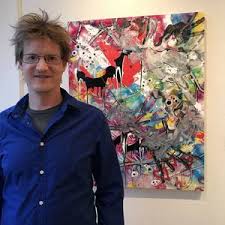 Blake was born in Oklahoma City, Oklahoma, in December 1978. His father was in the Air Force, and by the time Blake was one year old he had already moved twice and was living in North Pole, Alaska, where he stayed with his mother and sister while his father continued to travel the world: Turkey, Texas, and Arizona. He has been living in Massachusetts since 1997. He received his BS in Art and Design from MIT in 2003 and has been exhibiting his work publicly since 2008. His work is internationally collected, and he has participated in artist residency programs in Italy, Romania, France, New York, and Massachusetts.

Blake has investigated many forms of art-making. He studied performance art with Joan Jonas while at MIT and had a decade-long career as a living statue street performer. He produced a number of short videos while studying with Julia Scher and has dabbled in installation, photography, screen printing, electronic, and interactive art, but he keeps coming back to painting. Visit him here at his website.