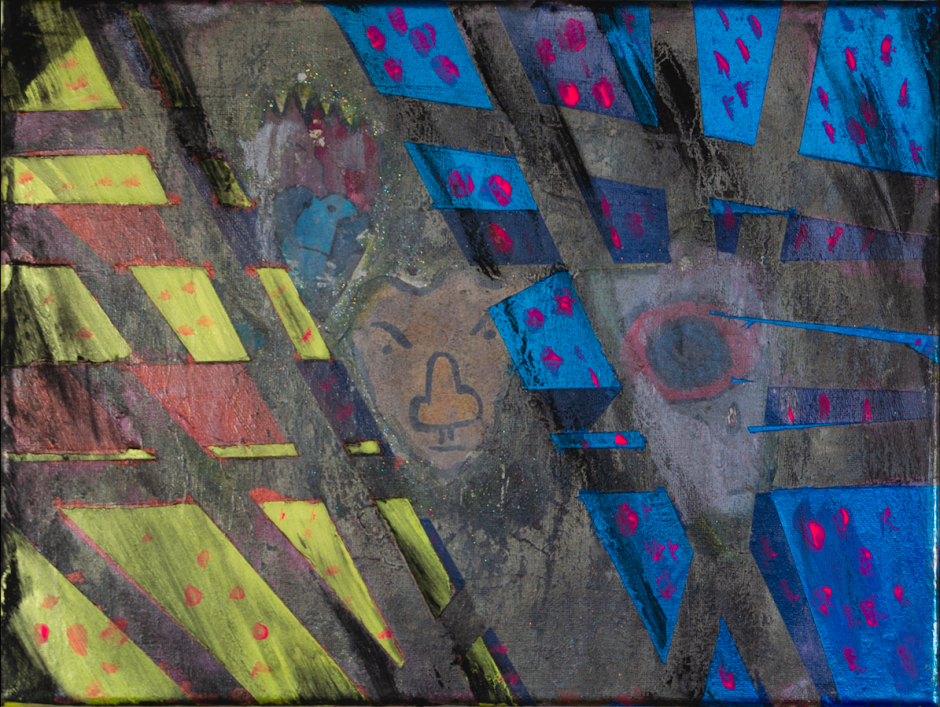 Artist’s Statement: “We are all strangers in a strange land, longing for home, but not quite knowing what or where home is. We glimpse it sometimes in our dreams, or as we turn a corner, and suddenly there is a strange, sweet familiarity that vanishes almost as soon as it comes.”
― Madeleine L’Engle

So it starts. Masking. Crumpling up corners and sanding off edges. Tearing off the “extra” and pasting the scraps over the transparent places. Sometimes it helps. Sometimes you can fool them, fool yourself. Some of the people some of the time. But there’s always a price to be paid.

Sometimes the damage can be restored. Sometimes—for better or worse—the changes are permanent.
But there is a crucial, crooked beauty in your own splinter of reality. Alien and otherworldly to anyone who doesn’t live on the planet of You, this fundamental strangeness shines through in spite of everything you and an often unfriendly world can do to suppress it.

I make the art I make because I believe our irrepressible strangeness is the most valuable thing we own. I believe that we must resist the overwhelming urge to flatten ourselves into some outline of what came before. We must become more and more ourselves, as a matter of honesty. As a matter of urgency.

Art is the best (or perhaps only) way I know to express the parts of ourselves that make us feel most alone and the things we find difficult to talk about consciously. It is the only way home.

Frankfurt-based American-born contemporary artist Ben Gencarelle explores the far reaches of weird through paintings, drawings, and noises. His work investigates how the fundamental strangeness of being a human being is compounded by the alienation of finding yourself an outsider for reasons of language, nationality, culture, personality, or unusual neurology.

After early studies in art at the University of Rhode Island and expeditions into the world of illustrations and music, Ben took a turn into the technical with an electrical engineering degree. The same themes resonated in his engineering and his art, and the boundaries between them blurred as musically-focused electronics projects and feedback howled. He graduated Summa Cum Laude from Johnson & Wales University in Providence, Rhode Island. Ben went on to pursue a Masters in Electrical Engineering from the Hochschule Darmstadt in Germany before the deafening screech of burnout sent him back into the arms of painting and illustration. What followed was a frenzy of unleashed creativity which culminated in his current projects: We Became A Book, a narrative volume of illustrations, and several new series of paintings. Communication and the never-ending scramble for integration remain at the heart of everything that leaves his studio. You can find more of his art on his website. This is his first feature on The Fictional Café.