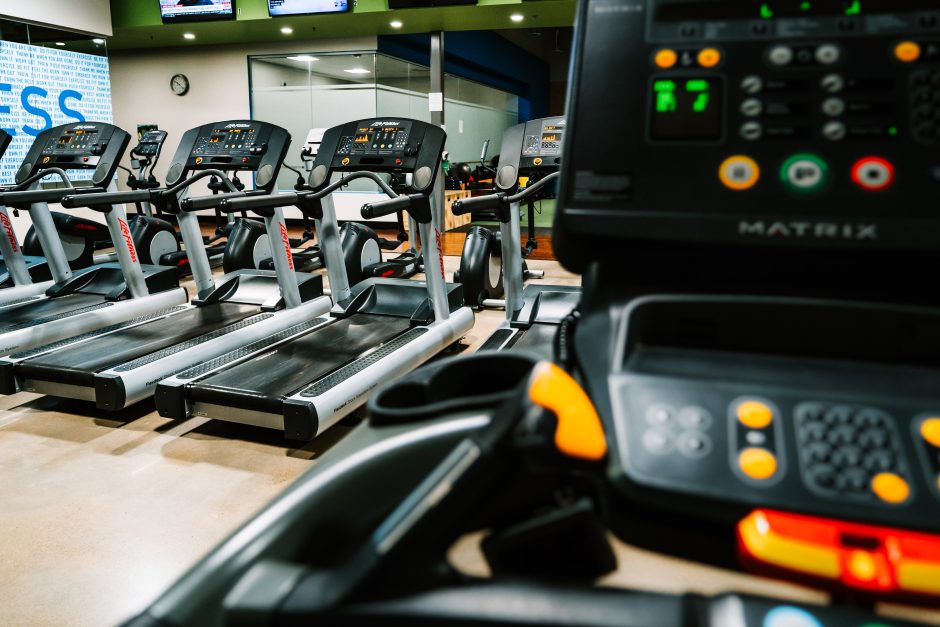 The gym is for the apartment complex. A majority of the gym’s population includes moms reaching back towards their fitter past and young childless men who will one day give up on fitness altogether once they begin their own child rearing.

On a given Wednesday afternoon, the random assortment of moms and bros fills the small space. Moms on ellipticals and bros on the weights. Everyone has headphones in, everyone in the same room, but everyone’s individual music tastes transport them to immensely varying experiences.

That is, until a mother of three and soon to be four cries out in alarm. A small puddle forms at her feet and she knows immediately that she is going to be a mother of four a whole lot sooner than she expected. The cry draws the attention of the other women in the room who immediately know what is happening. Most of the men on the weights are unbothered by what they interpret as a pregnant woman who has pissed herself.

One of the women rushes out of the room to get help. Another quickly decides to interrupt her music with the voice of a 911 operator, all while still maintaining pace on the elliptical. Two of the more upstanding gentlemen in the room help our mother in distress to a bench. This interrupts a guy’s workout. He’s a little mad at first but then finally understands what’s happening.

Nina, the woman practicing labored breathing in this musty room, darts her focus between the random strangers who surround her. As the situation intensifies quickly, many offer advice, the men more so just words of encouragement. Nina recalls her doctor’s repeated amusement at just how fast her first three came and she doubts number four will be any different. This fact helps calm her about as much as an idiot in a tank top incessantly telling her to just breathe deeply.

One of the women in the room has a wikihow article open on her phone for how to deliver a baby and truly feels like she can be a hero. Only a couple of minutes have passed since the debacle began, but sweat soaks Nina’s clothing. Beads of sweat adventure down Nina’s face and collect in the shallows of her neck and shoulders. She shifts repeatedly to find some level of comfort in the ever-intensifying feeling of impending doom, or magic of childbirth, it’s all up in the air at this point. When she shifts, those pools of sweat spill and further soak her saturated clothing.

Brad, a featured guest of the apartment gym known for his weight slamming antics, looks to be in worse condition than Nina. He is keeping his distance from it all, and he decides to take a knee because his legs are shaking so badly. If anyone commented on this, he would tell them it is because of the crazy leg pump he got in just before this pregnant bitch decided to have her fucking kid here. In actuality, the most serious he has gotten about anything the past couple years is defending the opinions of Joe Rogan at Thanksgiving dinner a couple of weeks ago, so the weight of witnessing childbirth, unbeknownst to him up until the present moment, absolutely terrifies him.

At five minutes in, wikihow woman has managed to remove Nina’s pants and is crouched in front of her like a catcher behind the plate. This is her moment. Nina has resigned to fate and through it all she optimistically ponders on how one day when her family of four kids, and for God’s sake no more, all move into a beautiful home. They will have family over for Thanksgiving dinner and have conversations about such randomly divisive things as the political opinions of podcasters. Within these distant Thanksgiving dinner conversations, they will always tell the story of how their youngest was born in their old apartment’s gym. This will always embarrass the youngest but then he’ll grow—

And it’s happening. Or it happened. It is one in the same. He flies out like a fastball into wikihow woman’s hands, and for all her vanity in somehow attempting to make the moment about her, wikihow woman catches the magnificent baby boy with the grace of practiced hands. Birthing custard coats the newborn and the sweat covered bench (it’s not all Nina’s sweat). Nina lays her head back and listens as her boy’s first screams bubble up into the world.

The gym erupts in roaring applause as it is significantly fuller than when this all began. Brad vomits and he probably has an excuse for this too, but he is also brought into the moment and smiles and claps. No one has headphones in, no one is listening to music, everyone is in the same room, everyone is having the same experience, and all it took was a human being born.

Colton Vandermade is an author of short stories, none of which have been published. He was born in Bonsall, California and now resides in Charleston, South Carolina. When not writing, he can be found hiking local trails, questioning his life decisions, and procrastinating any form of productivity. Colton can be reached on Instagram and Twitter.