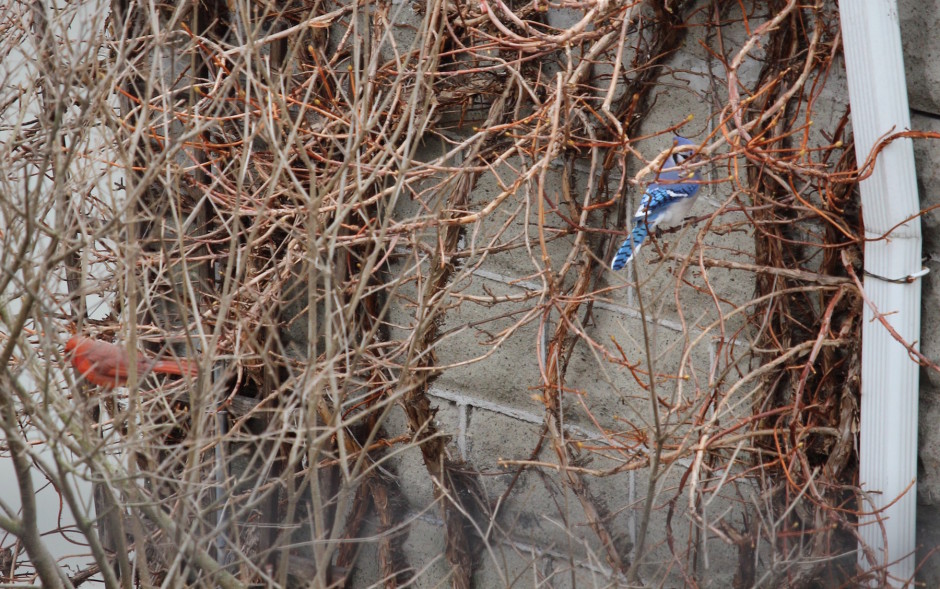 It’s April. The human- and wild-life are coming out of hibernation, the trees are starting to stretch their limbs and baseball’s opening day is here. Those who believe in omens (and care to wager on them), take note of the photo above, taken in my backyard recently. The Cardinals and Blue Jays are two of the six teams that play on opening day. They also happen to be contenders to win their divisions and could possibly meet in the World Series in October. Do you believe in omens? How about urban legends?

Well this month we’ve got a short story from Joan Connor entitled “Suburban Legends.” Whatever you’re thinking it’s about, you’re wrong. I’ll wager on that. Stick around and find out how Joan spins a yarn into a cautionary tale.

Next, we have the poetry of Patrick Flynn. He writes of angels and takes us through graveyards. But don’t hold your breath as you read; you might rush past his carefully selected wording and miss his point.

Now if omens, legends and graveyards aren’t enough, we’ve got Lew Holzman’s perfectly ghostly digital art. We’re not saying you need to believe what you see, but be prepared to have chills run down your spine. Cue the X-Files music.

Let that music run, because we’ve got some more sci-fi up our sleeves. For April’s podcast, we welcome the legendary Scott Sigler to the Fictional Café. Scott is the guy who launched the revolution in novel podcasting in 2004 with “EarthCore,” an engrossing story about an underground discovery of an alien visit. He’s not only an outstanding writer, but he narrates his novels for their podcasts as well. Once you’ve heard Scott, you’ll never forget him. Be sure to stop in next week as we begin our three-part excerpt from “Ancestor” by Mr. Podcast, Scott Sigler!

Lastly, in case you missed it, we have a contest going this month, so check it out!