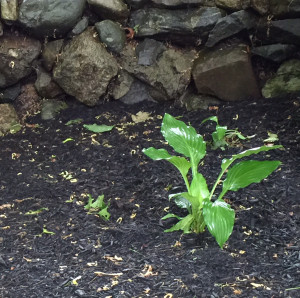 It was the hottest day in July when the first puppy died.  Sweat poured over Braylee’s eyebrows and trickled down her chin.  Her blonde hair stuck to the back of her neck and her bangs fell into her eyes as she tried to force the shovel into the concrete-hard desert dirt.  Despite her best efforts, she could only scrape away the top layer of rock and dead fluff grass.  With each blow to the ground, fatigue and frustration gripped her arms and back.

She used the force of her scrubby fifteen-year-old frame to finally slip the point of the shovel into the stubborn dirt and pushed with all her might until flesh rubbed away from the palm of her hand when the ground finally broke.

Braylee removed the last shovelful of dirt from the puppy’s grave when the sun began to disappear behind the Tehachapi Mountains. Gold and crimson washed over the Antelope Valley and poppies began their slumber by wrapping their brilliant orange petals together like hands in prayer. Across the way, cars were turning on their headlights as they passed through Palmdale on Highway 22.

She wiped the sweat from her forehead with the back of her dirty hand and studied the hole, hoping it would be deep enough. She dropped the shovel and pulled herself atop the concrete retaining wall that separated her yard from the rest of the Mojave Desert and watched car after car leave town.

“Take me with you,” Braylee whispered. “Take me anywhere, but here.” Headlights became taillights that carried her whispers away and left her behind. She knew one day she would escape the desert once and for all and watch her tiny stucco house disappear in the rearview mirror.

She knew she needed to cover the grave before she lost the light, but she was drawn to the sunset. She inhaled the golden hue and let it flow through her body and seep into the dark crevices within her.  It shone through the keyhole of the locked door she hid herself behind and it filled her with hope. She felt the light break free from her fingertips and toes, the pores of her skin and her crown.  She was brilliant and beautiful in the moments just before nightfall, just before darkness filled her once again and hope hid in the shadows.

She jumped down from the wall and picked up the baby blanket that cocooned the puppy and gently placed it in the hole. The pink hearts and smiling teddy bears that covered the blanket disappeared with each shovel full of dirt.  Braylee packed the dirt as hard as she could.  She stood in front of the nameless grave, her hands burning, her heart broken. “I’m sorry,” she said.

Just moments before, Braylee had kept vigil, stroking the shepherd’s soft hair, running her hand over its emaciated body and bloated stomach. Its hip bones protruded like jagged rocks covered with tan satin. The puppy panted, whimpered, and lay listless on Braylee’s bedroom floor. She took a small spoonful of water and put it to the pup’s lips before trying to force the liquid down its throat.  Most of the water spilled out of its mouth onto Braylee’s hands. An acrid stench filled her nostrils as diarrhea trickled from the puppy, sticking to its hair and staining the soft, pink baby blanket it lay upon. The image would forever stain her mind and no matter how hard she scrubbed, it would never disappear.

When the shepherd died, a gut-wrenching noise escaped Braylee she hadn’t heard before and it frightened her. The sound had lain in wait like a cougar ready to burst from the shadows and pounce.   Her heart slammed against her hands when she pushed against her chest to keep her racing heart from breaking free. She was embraced by phantom arms that squeezed the air from her lungs and made her ribs ache.  She gasped for air, but her shallow breathing made her lips numb. Fear perched upon her shoulders. She was certain she was dying.

Just as quickly as it had begun, the phantom released its grip and she fell to her knees, shaken, weary, and weak.  She hadn’t saved the puppy. She had failed. She curled up on the floor and pulled the lifeless puppy to her, its body still warm. She imagined her own life trickle from her body, staining the carpet, soaking into the walls. A memory forever trapped in the desert.  Braylee closed her eyes and the world fell away. Time stopped. Everything stopped – every racing thought, every tear, every worry. She lay on the floor until her hip ached and, when time began again, she reluctantly opened her eyes, took a deep breath and wrapped the puppy in the baby blanket. After hours of watch, she left her bedroom, the one place she felt safe.

Her father was in the garage working on one dream or another. Really, just an excuse to miss work. Again. What started as a day here and there led to a week, which turned into a month. Braylee had lost count of all the months. She walked to the garage and hoped to see him just long enough to give him the puppy to bury and run back to her room. She hoped, of all days, this was the day he would be kind.

“Dad, the puppy died,” Braylee said. Her voice was fragile, as if the words that fell from her lips would shatter into a million pieces. She held the puppy out to him like an offering and waited.  He finally rolled out from underneath the ’56 Chevy motor he was rebuilding and walked towards her, shovel in hand. Relief washed over her.  He stood in front of her and hesitated and relief was replaced by panic. She had seen that look in his eyes before, like an unexpected storm had set in and she had no time to seek shelter.  Sometimes she had advance warning – the way he opened and shut doors, the cadence of his walk, the speed and intonation of his speech.  She was wary of the calm because the fury would be close behind. She had hoped for a calm day.

“Grab it,” he said, pushing the shovel towards her.

Braylee was still. She understood each word separately, but not together.

“Grab the goddam shovel, Braylee,” he said again, this time grazing her chin with the handle. “Bury it next to the retaining wall,” he said. “And make sure you dig the hole deep enough so the coyotes don’t get it.”

The handle had grazed her chin, but it might as well have been shoved into her gut. An explosion of acid burned her stomach and throat. She wanted to run, yet couldn’t move.

“Get going!” he said and dropped the shovel at her feet before he slid back underneath the motor.

Anger raged within her, pounding and pushing, kicking and slamming against her bones. She wasn’t sure if she could hold it back this time. Braylee’s eyes burned through her father’s grease stained t-shirt and darted to the chains cradling the motor. The glowing orange metal links sparked and snapped apart.  The motor crashed into her father’s chest, crushing his sternum and shattering his ribs.

“Help me, Braylee,” he whispered and held out his hand. “Help me.”

She knelt next to him, just out of reach.  She had never seen her father afraid before, so powerless, so quiet.   She stared into his puppy-dog eyes and smiled.  For the first time she could remember, she felt safe.  She listened to him pant, quickly at first and then sporadically until silence fell over the garage.   And when it was over, she didn’t make a sound.  He couldn’t hurt her anymore.

The vision disappeared, just as it had every time she imagined it.  His cold voice cut through her. “Braylee!” Her father rolled out from underneath the motor again and stared at her with his stormy eyes. “Stop being such a cry baby. Now get out of here!”

Braylee grabbed the shovel with one hand and pressed the puppy against her chest with the other. She let the metal drag across the gravel driveway like an anchor that would stop her before she reached the retaining wall. She dragged it past the gutted Chevy…past the makeshift shed where the other six puppies whined and waited…and past all the other forgotten dreams that littered the yard. When she reached the wall, she wouldn’t just bury the puppy. She would bury the one thing she needed to hide for safe keeping, the one thing her father could never touch. Hope.

Jenny graduated from Willamette University in 1994 with a Bachelor of Arts degree in Sociology and Spanish and has dedicated her career to supporting seniors and people with disabilities throughout Oregon.  She currently lives in Salem, Oregon with her husband, two beautiful daughters, a bratty wiener dog, and an elderly cat.