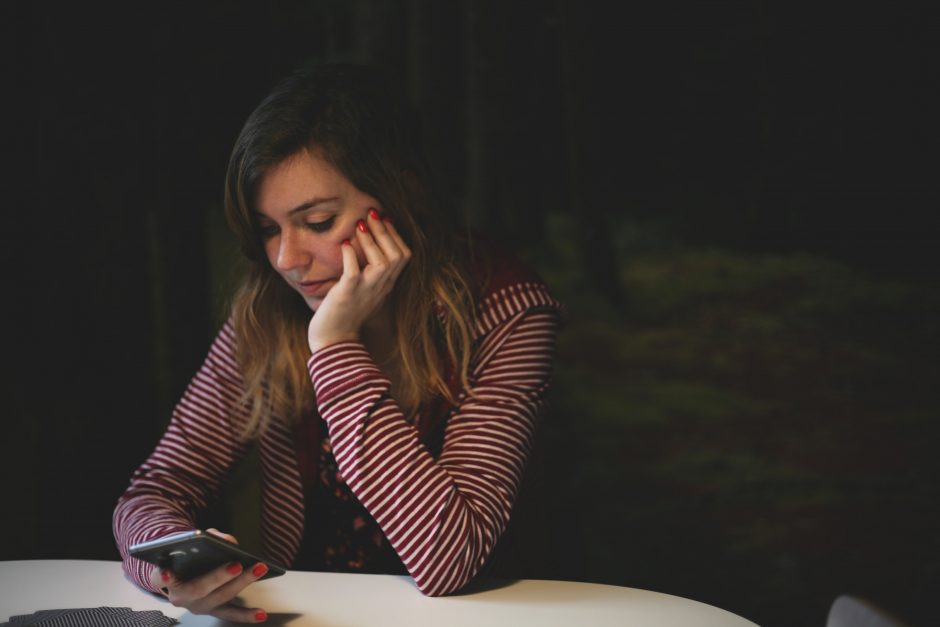 “Would you like to see the menu?” the waiter couldn’t help himself from approaching Lisa.

“No thank you. I’m waiting for someone.”

She has been waiting for quite a while. She doesn’t mind waiting in such a nice place. Smooth jazz playing and she has her phone to keep her company.

Lisa prefers this eatery to other ones nearby. This is the only place that has enough space to fit her laptop, papers and coffee mug on a table for one. Some days she plugs in the headphones, gets into the new assignment and hours goes by without her noticing. When it comes to meeting someone for the first time, this place is tops at cordiality.

She looks down at her phone to check the time.

Nina has a habit of being late, Lisa knows that. Nina must have gotten into those hairstyle tutorial videos and lost the track of time. Classic Nina!

Despite never meeting her in person, Lisa feels like she knows Nina very well.

They have been online friends for over a year now and Lisa doesn’t make friends easily. So, she tries to hold on to the people she clicks with.

Lisa can always rely on her for a therapeutic conversation after a long hard day. Last night when Lisa was struggling with her assignment, Nina was there to take the stress off. She thumbs back through the messaging app. She starts to feel better just by glancing over the conversation once again:

– Lisa you’re not going to pull an all-nighter again. Are you?

– If I get hooked on another Netflix show, I may just do it.

–  That is so unhealthy.

–  No offense, but you sound so much like my mother. I wonder why I’m even friends with you!

– Yeah, sure whatever. Potato Potato. That didn’t make any sense. It doesn’t work while you’re texting.

Lisa notices Nina hasn’t replied to any of Lisa’s messages from today. She hasn’t been online since last night. Is Nina all right?

Lisa starts to panic. What can she do? Lisa doesn’t know any of Nina’s friends.

Or could it be she’s bailing on Lisa? Has she ghosted Lisa?

It’s not the first time something like this has happened. It’s 5:15.

Nina was supposed to be here at 4:30. Lisa feels a knot building up in her throat out of rage, despair, and frustration. How could Nina do this to her?

Lisa takes up her phone to text Nina one last time. She’s struggling to breathe. This happens every time. Her hands are shaking, everything is a bit gloomy. She proceeds to leave the place and as her fingers approach the messaging app, she texts Nina. She lets her know there’s no need for Nina to show up as she’s leaving. Lisa hesitates, wondering if she should tell Nina how bad it hurt her.

No one’s worth that, she tells herself as she steps out of the cafe.

She’s out on the street. Thousands of people are with her, running around in the same chaos. Yet she finds herself alienated. She’s walking down the sidewalk at a great pace. She can’t wait to get home. She can’t feel her legs, almost as if she’s floating in a sea of people.

She needs to cross the road. Her blurred vision is not helping. The buzzing noise keeps on going. It starts to get overwhelming. The feeling spreads from her stomach through her chest to her throat.

Amid this tumult, a voice from the back yells, “Watch out.” She has to ignore that completely because of the loud noise in her head.

It’s about the time when she looks down at her phone to check for new texts. Her eyes get locked on the phone screen. She’s having trouble breathing because of the lump in her throat, induced by shock and bewilderment. The horns beep but she can’t seem to take her eyes off of the screen.

There are two accounts logged in from her phone:

A few minutes later there’s a gridlock of people in the middle of the street. People taking pictures, trying to get a glimpse of what’s happening.

Two men in fairly unusual attire look at each other. The taller man asks his associate, “Did you get the purse? I got the phone.”

– “I got the purse. How’s the phone? In good condition? How much do you think we’ll make off of it?”

– “Good enough, I’d say. There’s just one very weird thing. This girl has two fake accounts logged in. It seems like she talks to herself under two names. Crazy!”

They break into laughter and blend into the crowd. No would believe they robbed a road accident victim minutes ago.

To their obliviousness, Lisa had smiled the moment she knew the secret she had been keeping from herself. The gut-wrenching terror, the sickening thud, couldn’t stop her from applauding herself. Deceiving people was always her forte. This time, she herself was at the end of her magic wand. And she was glad. She wouldn’t have traded it for anything. So she kept smiling until the utter silence took over.

Ramisa Alam is a college student who is trying to find her way around writing. A few of her flash fictions and short stories have been published in some local literary magazines. This is her first feature on the Fictional Café.