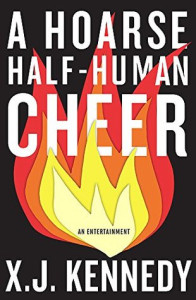 It was Peter Dexter who wrote, “Keep in mind that a book that entertains without enlightening can still be a guilty pleasure, but a book that enlightens without entertaining is algebra.” Joseph [X.J.] Kennedy’s delightful A Hoarse Half-Human Cheer is, admittedly, intended to entertain, yet it enlightens in being a period piece – après-guerre America, circa 1946 – foreshadowing the sprawling modern era in this country with wit, humor and irony. After you finish re-reading Heller’s “Catch-22,” this is the novel you should begin.

Young Moon Gogarty is the book’s Candide, trying to deal with his stultified feelings after having lost his first love to his mortician grandmother, just as he’s about to begin his studies at the infamous College of Saint Cassian of Imola. He’s thrust into a community of 4,500 older men who’ve just been discharged from military service after World War II. Here we gain our first revelation: the government realizes there aren’t enough jobs – at least not just yet – for this huge number of ex-GIs, and must ease them back into American life with a few years of college. This, of course, was the beginning of the GI Bill and the belief that Anyman could be educated at the college level, an experiment that persists to this day.

Waiting within Saint Cassian’s Catholic college’s walls is Father Douglas Knox, an embittered, dark-spirited but highly ethical priest whose primary interest is the college basketball team. Concerned to the point that every act of policy is perceived as either good for the team or not, he seems to conclude that most are the latter. Knox knows he is a study in contradictions, but his alcohol abuse precludes much self-examination, so he projects his contrariness on everything and everyone else, in particular the college president, Father O’Malley, who possesses that special ecclesiastical ability to transform moral, ethical or intellectual dichotomies into doctrinal blessings. Even regarding Glauco Vastasi, a known New Jersey Mafioso in the employ of a capo named Ricco Peruccese, AKA Ricky Peru, who has been planted at the college to acquire military surplus, from typewriters to M-1s, and resell it on the black market. Peru wants Father O’Malley to bestow an honorary degree upon him for donating funds for a building. Everyone, it seems, has an angel on one shoulder and a devil on the other.

If all this sublime hilarity weren’t enough, Kennedy gives us the lovely, pneumatic Aisling Weinstein, formerly an Army officer, now the college’s new biology teacher and a single mom masquerading as Vastasi’s wife. Aisling is the kind of woman who, in those times, would be labeled a nymphomaniac. Try as she might, she cannot take Moon’s virginity, nor conquer the folds of Father Knox’s habit. No matter, there are many others who stand ready to serve, and it’s only one of the numerous plot twists that make the novel so utterly, page-turningly, delightful to read.

The championship basketball game between Saint Cassian and its arch rival, Holy Sepulcher College, is played for all its worth – not by the teams, but rather the gangsters who are betting on it. Moon, who finds his calling as a reporter for the college newspaper, uncovers the military surplus scandal, but not without putting his own life in jeopardy. Another faculty priest who heads the Children’s Crusade fundraiser is a pedophile. And what of these religious fanatics with their flattop haircuts shaved as crosses who have sworn a blood oath against Father Knox?

Kennedy challenges us to think about his subjects: the military, the post-war social norms and how they have shaped our modern culture, the Catholic church, interracial relationships, higher education, motherhood, adolescent coming-of-age, organized crime, college sports, newspapers, Hope, and Fear, and Ennui, and Perfidy. The author’s sharp-witted pen teases the human animal, never sparing the subject matter; where else in literature might you find a mafia boss asking Mickey Spillane to write his honorary Ph.D. acceptance speech? It just goes on and on as you eagerly turn page after page to find out what happens next, in between wiping tears of mirth from your eyes.

Kennedy’s simple but elegant writing flows; you will be spared Heller’s often clumsy, heavy-handed, novice writing style. This is the work of a master of words and style, a guilty pleasure indeed.

For the literarily curious, it is recommended you read the poem, “A Ballad of Hell” by John Davidson, from which the author drew his title.

Previous postPeople, Places and Things I Know on Twitter – NOT!
Previous postCoffee Cup…Butts?