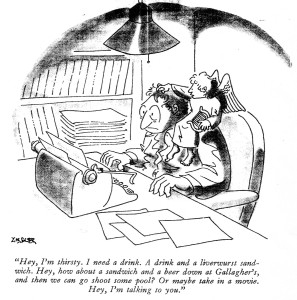 HOKAIC. It sounds like a Klingon curse word, but actually it’s the most important concept for success in any writing endeavor. It’s an acronym that stands for

HOKAIC is absolutely the key to success as a writer because writers…well, we write. Maybe not for pay. Maybe not for publication. But we write. So at the end of the day, you’d better have spent some time with your hands and ass in the right place.

It’s not always as easy as I’m making it sound, but it’s exactly that simple. Kick writer’s block where it hurts, then get busy writing.

This is just part of the day for most people who make a living at our craft. For folks who still struggle with this, here are four tricks to get that HOKAIC quality time started when the words just don’t want to flow.

Sit your ass down in the chair, put your hands on the keyboard and just start writing. It can be “All work and no play” over and over a la Jack from The Shining, or a letter to your mom, or your grocery list. Just warm up to get the juices flowing, then transition into what you should be writing for that day.

Ever listen to a kid tell you about his favorite movie? It sounds a bit like this:

Sometimes you need to get the ideas out before you can turn them into beautiful prose. Write your story like a 7-year-old telling a friend about it and see how quickly you get it all down.

A lot of old warhorses use this brilliantly simple trick. When you quit writing for the day, don’t give in to the temptation of finishing the scene you’re in the middle of. Instead, leave yourself hanging. You’ll come to the keyboard the next morning (a) eager to finish the scene and (b) knowing exactly what you’re going to write. Since the first line is always the hardest line and the first paragraph is always the hardest paragraph, this is a sure-fire writer’s block solution.

Or move around in some other way. Make it a mindless task – exercise for preference – that lets your ideas and assignments for the day percolate. As you round the corner to your house, or wherever you write, start thinking about the first words you’ll type when you sit down.

Then sit down and type those words.

Jason Brick is a barista at the Fictional Cafe and a professional writer. Learn more about Jason on our “What We’re For” page and at his website, That Writer Guy.

Editor’s Note: What do you do about writer’s block and procrastination when it hits you? Tell the Fictional Café community all about it in the comments below. The next HOKAIC time you create with your idea could be your own…