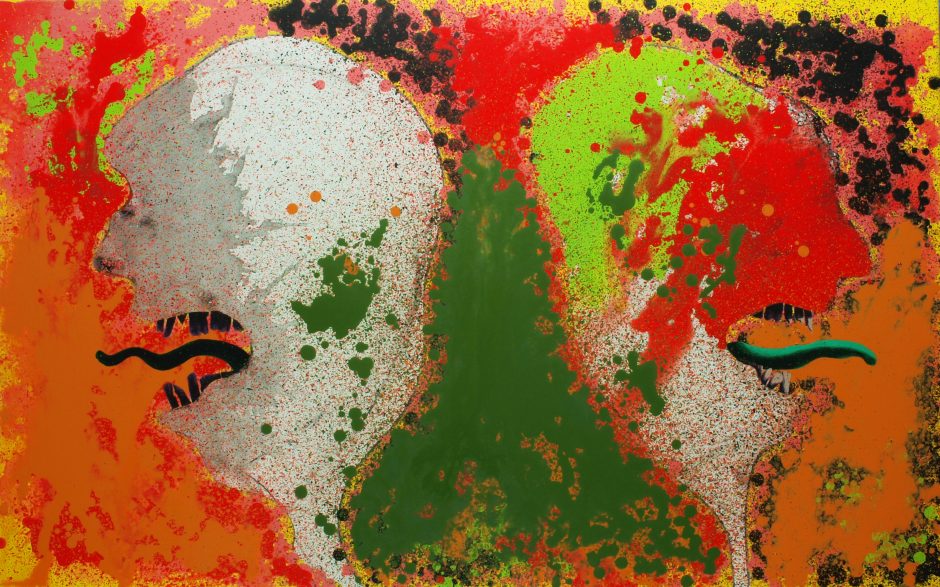 Artist’s Statement: My work explores my anxieties. I work to externalize those anxieties in a visually interesting way. The image of a Hungry Ghost (in Buddhism, a person doomed to wander the earth, unable to satisfy their overwhelming desires) has always been a recurrent theme in my work, but in the last two years it has taken a more central role. Who knew there were so many of them?

I find the image of the Hungry Ghost useful in explaining to myself the current political state of things and at the same time externalizing my emotions to reduce the angst I feel. In some Buddhist cosmology, a person can be reborn as either a human being, into the realm of the Gods, or as a Hungry Ghost; Hungry Ghost being the worst rebirth. I find it funny to imagine various people in this traditional manner of depiction.

At any given time I have historical artists in mind that influence my thinking without having any direct stylistic influence. Currently the artists who are usually in the back of my mind are Pierre Bonnard, Philip Guston, Francisco Goya, and Hieronymus Bosch, as well as comic artists like Mike Mignola (Hellboy), and Frank Miller (Sin City), and R. Crumb. These artists set an example of excellence that inspires me.

As for the medium itself, using color and the characteristics of the paint, I try to balance figure and ground with neither dominating –  emphasizing the material nature of painting. I let the materials develop as organically as possible to avoid a pre-conceived outcome. When I am stuck on how to proceed or the result is too predictable, I sometimes will throw paint randomly over what I have done.

I grew up in West Virginia and have spent most of my life here; I have also lived in California, New York, France, and South Korea. I studied painting at Kenyon College in Ohio and received an MFA degree from the University of North Carolina – Chapel Hill.

Naturally I hope viewers will come away with some of what I intended but if they see something else, that is a bonus. Everyone’s experience is unique and communication is complex and difficult.