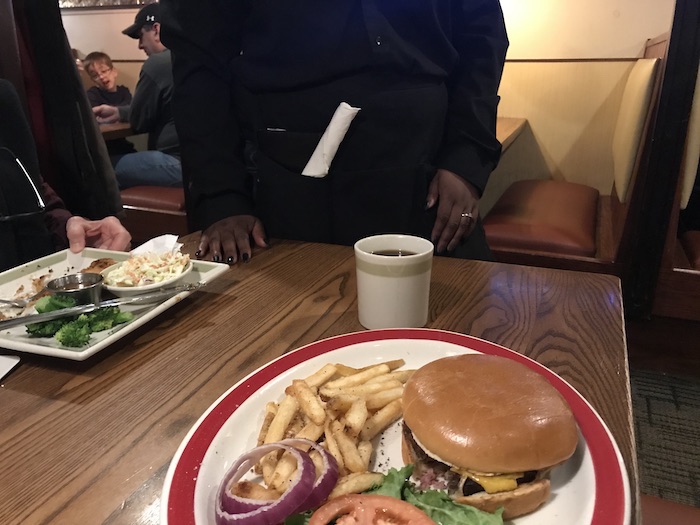 We welcome Paul Negri, a new member of the FC Coffee Club today, with a witty short story for you.

“It’s so sibilant.” Jamie picked a french fry from Seth’s plate and put it on top of her frisée salad.

Jamie filched another fry. “I never made that sound.”

“I never heard that.”

“Of course, you didn’t hear it. It’s like snoring. No one hears themselves snore.”

“You slept like the dead. I was the one it kept up.”

“I was pretending to sleep. So I wouldn’t disturb you. I was always very considerate. Kind, even. You must give me that at least.”

“Yes, you were considerate. So considerate it hurt. Sometimes kindness is the cruelest cut of all.”

Jamie sighed. “And this is how you plan to get laid, Seth? With alliteration and metaphors? Is that how you think you’ll draw women like moths to your flickering flame?”

“Women of a certain age, yes. Mature, cultivated women. Literate women. Women who appreciate a literate, honest man who won’t hand them a line about love or commitment—”

“It’s still slam bam thank you ma’am, isn’t it, Seth? Isn’t that what you’re offering in a peculiar tongue-twisting way?”

Seth flipped his laptop closed. He was as dark as Jamie was fair and five years her senior, but looked younger. In the community college where he taught English, he had overheard one of his female students say he was a DILF, which he learned, after asking his phone, was a good thing to be. “I did not ask for your help, Jamie. You offered. Rather insistently. Honestly, I do not need my ex-wife’s help in writing a personals ad.”

The waitress came over and stood by their table. “You folks doing okay?”

Jamie looked up at her and smiled. “It’s our anniversary. Six months divorced today.”

“Congrats,” said the waitress. “Can I top you off?” She was holding a glass pot of coffee.

“Can I ask you something?” said Jamie. She glanced at the name embroidered on her uniform. “Debbie?”

“I’m Cindy. I borrowed Debbie’s top. Debbie’s sick today.” Cindy was short, young, and busty. “But you can call me Debbie. I like it better than Cindy anyway.” She was chewing gum.

“Do you hiss when you have sex, Debbie?” Jamie asked.

Cindy stopped chewing. She put the coffee pot down on the table. “You mean like a snake?”

“Or a radiator?” Jamie raised her eyebrows.

“That’s okay. I get asked a lot of funny questions,” said Cindy. “Just something about me, I guess. A guy the other day asked me if I was gender fluid. I had to Google it.”

“What did Uncle Google tell you, Debbie?”  Jamie reached for another french fry, but Seth slapped her hand.

“When I have sex. No hissing. Just like a kind of shout. I scare guys.”

Jamie looked at Seth. “No one hisses. It’s in your head. Something in your head hisses when you have sex. You should get that looked at.”

Seth opened the laptop and turned it toward Cindy. “Debbie—I mean, Cindy. Will you do me a favor, please? Read that.”

Seth looked at the screen. “Wait. There now.”

Cindy scribbled on her pad and put the tab on the table. “Pay the cashier. No rush. You guys are funny.” She picked up the pot and went back to the kitchen.

Seth pushed his plate toward Jamie. “You can finish the fries.”

Jamie picked one up and dropped it back on the plate. “I shouldn’t. I’m watching my figure.”

“You look great,” said Seth. He coughed. “How about you? Have you been dating a lot?”

“Not a lot. Some.” Jamie forked her salad. “Men aren’t serious. Then they get too serious. Then scared. Then boring. I hate boring.”

Jamie nodded, slid out of the booth, and left quickly.

Seth sat staring out the diner window. He had no classes, but did not want to go home to the apartment he now rented. He did not like it. He found it lacking. The two women he had brought back there after a date seemed not to like it either. One left in the middle of the night. Seth closed his eyes.

“Hey, mister.” Jamie slid into the booth. She put her elbows on the table and leaned in toward him.

Seth smiled. “I hoped you would be.”

Paul Negri has twice won the Gold Medal for fiction in the William Faulkner-William Wisdom Writing Competition. His stories have appeared in The Penn Review, Pif Magazine, Vestal Review, Jellyfish Review, and a dozen other publications. He lives and writes in Clifton, New Jersey.