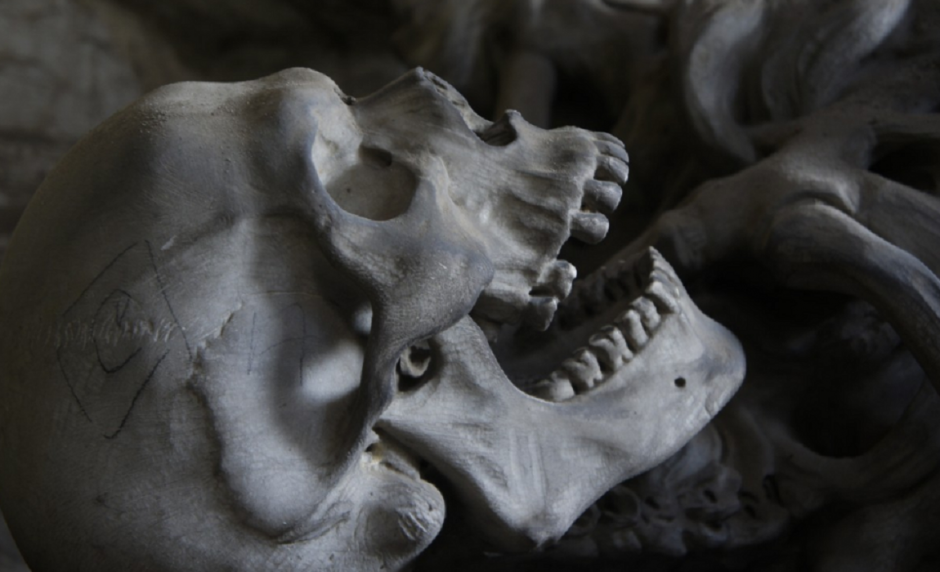 Editor’s Note: This short story will take you through a few unexpected turns with each chapter. You may begin to think you are being treated to a horror/fiction story and then maybe it’s really about a romance. Or is it? In any case, we hope you enjoy each chapter. We present these three intriguing chapters of the short story “Professor of Death” – beginning tonight and continuing throughout the week.

Things were getting a little too scary to suit Robert Fountain. He could feel the times changing around him, sense the movement of sinister winds, like the rolling in of a tidal wave, and he didn’t want to be standing on the beach when it got there. He was a man with two professions, one public, in which he was a respected authority of some note, the other private, in which he was an expert in demand. Each dealt with a different aspect and in a different way with the very same subject, and he was becoming very worried about that. And that could be very dangerous. The two top people in his private, elite, in fact, narrow professional field, had died recently under circumstances ordinary enough, but to Robert Fountain ones very suspicious. And that, especially, worried him.

Robert Fountain was easily the most popular professor on campus at the prestigious Shenandoah Valley University in Virginia. Students stood in long lines to get enrolled early in his classes. He was, after all, brilliant and somewhat a celebrity in his field of philosophy, Death and Dying—he’d written books—to the degree someone can be an authority on death and dying and still be alive, and was known around school simultaneously and affectionately as Professor of Death, Doctor End Zone, and the Fountain of Death. He had that uncanny ability to enthrall his students well beyond the course outline so deeply into the matter you’d swear he’d been dead, himself, and was just reporting back. And well one might find him fascinating; Robert Fountain knew death past the intellectual, in dimensions his students and colleagues would never fathom, none of it mystical, and none of it philosophical.

He was a handsome, distinguished-looking man with a full head of dark hair a bit grey at the temples; straight nose; lanky, athletic physique; and a casual, though careful and measured demeanor, even a subtle caginess. He wore tortoise shell glasses, which hung from his neck on a cord when he wasn’t reading, and expensive Scottish wools—well-tailored tweed coats and cardigans—and, in contrast to his humble American roots, looked like he ought to be the Fifth Earle of Something or the Grand Duke of Somewhere.

Robert dismissed his regular Wednesday class. “But for this particular discussion,” he said, in closing, “we eliminate the complication of life up until death and consider only the final stage, the act or process of dying, itself—that moment—and the existence, if any, of life after this world and what form it might take, isolated and void of worldly requirements. Intriguing stuff, indeed.”

“Right,” one student said, getting up. “Like, can you really get to heaven without morals and good behavior?”

“I don’t see the point,” another said. “No way we can prove it. Who cares if there’s life after death, long as we can party now and pay up later.”

“You mean the credit card approach,” Robert said. “Well, there’s one thing for sure, Mr. McManus, there’s certainly life after your death, I’m confident, and we’ll all look forward to as much of it as we can get, I’m sure.” That brought the expected round of laughter, including Mr. McManus’s, and the noise of the exiting class. “Don’t forget, papers due on the twenty-eighth. That’s Monday. Monday is the blue day on the calendar for those of you who know your colors. Have a nice Thanksgiving.”

Robert enjoyed these friendly little exchanges with them, particularly when he got the last laugh, which was usual and welcomed. Not that he couldn’t take a joke, himself. He could. In fact, he was becoming more personable lately, loosening up more, and students were beginning to warm to him, not merely respecting him professionally, and he liked that. But he was mindful of it and would have to be careful about his feelings, not go overboard. He was much aware of this as the smile eased from his face while he watched them leave the classroom. He wondered how he’d feel if he discovered he’d ever met any of their loved ones in his other profession, long shot as it was, or God forbid, if he might ever meet one of them one day down the road, perhaps not so long a shot, particularly should any of them enter the realm of the movers and shakers.

Awaiting him in his office of honor-laden walls was the usual messy pile of books, papers, and mail that go with the territory of a scholar like someone had set off a grenade on his desk and the residue settled everywhere. But it was not so messy he did not spot the one piece which meant more than any other, which could not be ignored or put off; the piece which, in earlier years, had brought on the sudden rush of adrenaline, the thrill of the hunt, but now evoked the dread of a bad omen—the small, gilded-edged envelope. It was time, it had been two months since the last message of its kind. The invitation, by appointment only, to a private auction of rare antiques at the exclusive shop in the better part of Washington, D.C. He knew that without having to open it. What he didn’t know was the exact day and time, only that it would be soon.

Robert sat staring at the envelope, not wanting to know and wishing he didn’t have to. There was, of course, no sale for him. It was, simply, the colonel’s way of summoning him for another assignment. Sometimes it was by mail, other times a coded phone call by a third party, still others a note on his door or car or fax. These people were cautious to a fault.

How quaint. Is there nothing sacred anymore?

Gail Hawkins had her own concerns, but for a different reason. She was in love with Robert and it drove her nuts not knowing what overcame him so often and made him so cold and distant on these occasions. But she also had a life. She leaned on the doorway, arms folded, shapely, stocking-clad legs crossed below her skirt, a pencil stuck behind her ear through shoulder-length auburn hair, and stared down at him, ready to give her ultimatum. There was so much she could take, could do, then she had to make a decision, no matter how painful. He’d warned her about becoming involved with him, she couldn’t deny it.

He was aware of her emotions, it figured into his problem, was, in fact, central to it.

Finally, she spoke, civilly but with determination. “Robert.” He was barely conscious of her presence. “Robert, we have to talk. Well, maybe you don’t, but I do. You can listen if you like.”

“See, there you go. You’re asking me what it is and you’re the only one who knows. Why don’t you tell me?”

“Something’s always coming up, Robert. I feel like half a person in love with another half a person. Look, I think tomorrow’s should be a showdown dinner. I can’t go on like this. I won’t.”

No surprise. Of course you do, she thought. The mother she never met was sick again and his entire life had to go on hold until she was attended to. She wished she could meet this phantom mother sometime, just once maybe, before it was too late. Maybe it would explain something about Robert’s life she couldn’t get close to. It was like he was hiding her.

“I understand,” she said, not understanding. “And you’ll understand, too, Robert, when I tell you it’s now or never. Something has to be done. I’ve done all I can do. I’ve passed up Thanksgiving dinner with my parents and family tomorrow to be with you so we can resolve this thing. You agreed to it. If you need more time for your mother, fine. We can make it eight, instead of two. But it has to be tomorrow.”

“Gail, I don’t know how long this will take. Next week would be good.”

“She’s real bad this time, they tell me. I think this might be it.”

“Oh, please, Robert, listen to you, predicting her death as a prerequisite for our having a normal relationship. Please.”

“You don’t understand. I promise–.”

“I’m tired of promises,” she said. “I’m sorry about your mother, I really am. But I’m even more sorry about us. Tomorrow at eight. Either be there or don’t be there.” She turned and left.

He stared at the empty doorway and the image of her leaving. He knew she was serious, as well as strong enough to live up to her convictions. Her strength and intelligence were the things he admired most about her, even above her beauty, which first attracted him, and he knew he did not want to lose her. He would never enjoy life without her as he had these last two years when she had brought so much happiness to him. She had given this new dimension to his life, the first time he’d ever been in love with a woman as an adult. He had been the starving, desolate man who’d stumbled on an oasis baring things nurturing to the soul and senses, things not felt together in harmony since his youth, things arrested, suppressed so as not to conflict with this other part of him. Things now hemorrhaging with new life.

But he also knew he would meet the colonel, as scheduled. The colonel did not wait for people. So, the following morning, Thanksgiving, Robert put all else in its neat little compartment and got into his Jaguar and made the drive in the rain to Washington.

End of Chapter 1. To be continued.