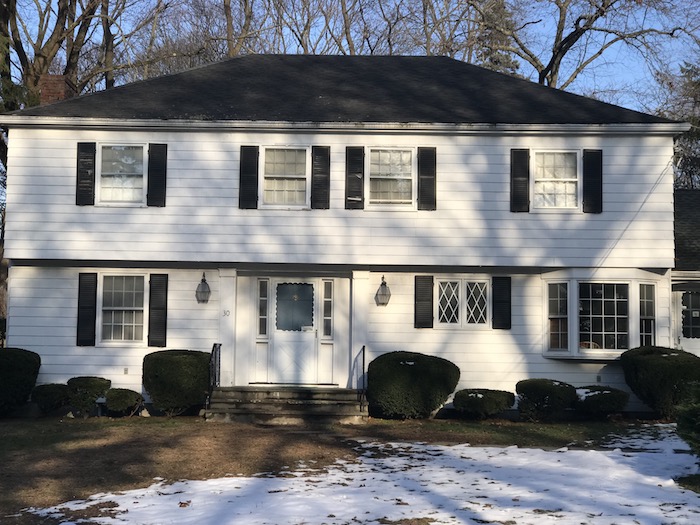 On Thanksgiving morning, Mía put her overnight bag in the back of David’s Mini Cooper. She loved the tan leather seats, cold from the night air, scented from David’s dark rolling tobacco. His strong hands guided the steering wheel loosely. He leaned his right arm on the console and played with Mía’s fingers while he stared at the open highway ahead. At each red light he would lean over and kiss her. They ended up in David’s hometown around five in the evening.

To Mía, all of the houses looked alike, most white with colorful shutters, and just a sliver of lawn between one and its neighbor. They pulled into the driveway of the last one on the block, with black shutters and round, stubby shrubs lining the front. A short set of steps led them onto the porch, decorated with wind chimes and a hanging porch light. David rang the doorbell and they waited, listening, standing in front of the black painted door. It opened with a swift, hard tug.

She looked like a bird of prey, a short, stout woman with a nose that hooked down like a beak and on her head a tuft of dyed-blonde hair. Her eyes were almost yellow, her lips so thin Mía really only noticed the lines around them.

David said, “Hi, Mom.” He bent down and wrapped his arms around her.

“Oh hello. Hello, my love,” still wrapped in his hug, her voice muffled by David’s shoulder. When he pulled away she was smiling.

“Hi, Wilma. I’m Mía. Thank you so much for having me.” The three of them stood in a triangle on the front porch, Wilma still mostly inside the house, Mía and David outside. Mía extended her arm forward to shake Wilma’s hand.

Wilma looked at Mía’s outstretched hand and said, “You can call me Mrs. Hewitt.”

It was cold. The November air shuddered around them. Mía let her arm drop, unanswered.

David put his arm around Mía’s shoulders, “Why don’t we go inside and I can show you my old room?”

Wilma didn’t move. Her body blocked the doorway. “And where are you from, Mía?”

“No, I mean, where is she from? Where are your parents from?” Wilma’s lips pursed together in an almost-smile.

“My parents moved here from Venezuela before I was born. But I was born in Philadelphia.”

“How interesting.” Wilma looked over at David. “Well, you both must be hungry after such a long drive. There’s cheese and crackers on the table already, and Aunt Jeanine brought some balled melon.”

Wilma finally stepped aside to let them in. David entered first, then Mía, and Wilma shut the door behind them.

Inside the house were five others. Aunt Jeanine, who was in her late fifties and newly divorced, explained to Mía why her husband wasn’t there as soon as they shook hands, as if she were apologizing, as if Mía even knew what his name was. There was cousin Debbie, who didn’t shake Mía’s hand nor get up from the couch at all during the evening except to sit at the dinner table. Her chin was too petite to uphold the weight of her drooping face, making her cheeks look like they were overflowing. Thomas, her husband, had a friendly, sad face. Whenever he could get David alone, he would try to talk to him about model airplanes, a subject David knew nothing about. Last, there was Kelly, an old family friend in her late thirties. She had a toddler, Oscar, who clung to her hip every time she went to refill her glass of wine.

They all sat in a circle made up of a white couch and a few differently colored armchairs, the eye of the circle being an old wooden coffee table topped with the crackers, cheese slices and melon balls. David left to grab two extra chairs from the dining room. Mía stood, smiling at the circle, waiting for the others to ask her questions, waiting for David to come back with the chairs. Wilma came in and placed a refilled plate of hors d’oeuvres on the coffee table.

The plate clinked loudly against the wooden table, “Y’know everyone, Mía is from South America.” Wilma sat down in an armchair.

“How fascinating!” Aunt Jeanine said beneath a sip of white wine.

“I hear they have really good food there,” Debbie added with a mouthful of crackers. Oscar started whining; he wanted to sit on Kelly’s lap but she kept brushing him away with her hand. Before Mía could speak, David came in with the chairs and set them down facing his mother, who got up and began helping David adjust the chairs. Wilma continued, “I’m sure it’s beautiful down there,” keeping her eyes on where she would fit the chairs into the circle.

“I’ve never been,” Mía said, stepping back so David could place a chair in front of her.

David pushed the other chair into the circle. “Been where?”

Wilma said, “Would either of you like a drink? I have some fabulous raspberry seltzer.”

“David, maybe you can show me your old room. Like you said before.” Mía looked at David, staring at him until he stopped fiddling with the chairs.

Half of the room was packed in boxes filled with yearbooks and wrestling trophies. The other half was as if a child was still sleeping here. A lava lamp stood unplugged in the corner and there were rocket ships drawn in pencil on the wall. His old bed was still made, dressed in navy blue sheets and a white duvet. David closed the door just slightly.

“What does your mother know about me, David?”

“Does she know that we’re engaged?” Mía’s face was hard. She looked up at David, straight into his eyes. He met her gaze, but his lips were tight in a straight line.

“I was going to tell her tonight.”

“Did she even fucking know you were dating someone?”

“Mía, we don’t talk like that. When she calls and I actually pick up, the most we talk about is school and what I’m making myself to eat.”

“So when you decided you were going to save up for a ring, propose to me, spend your life with me, telling your mother that you were seeing someone didn’t cross your mind?”

“My mom has nothing to do with our plans, Mía. And I didn’t want to say over the phone, ‘Hey Mom, I met the love of my life and I proposed about a week ago. What did you make yourself for dinner yesterday?’ I’m going to tell everyone over dinner. It’s going to be beautiful, I promise.”

Downstairs, the circle of family members looked about the same, just a bit sleepier. By this point, Debbie had developed a continuous stream of putting a slice of cheese on a cracker and putting it in her mouth, like a conveyor belt, and most of the cheese and crackers were gone. Wilma was in the kitchen slicing the fat off the steaks; David explained to Mía that his mother was allergic to poultry, so their Thanksgiving tradition replaced turkey with filet mignon.

“Shall we all sit down for salad?” Wilma stood in the kitchen doorway, wiping her hands on a dish towel.

The dining room table was dressed in a pale yellow table cloth. Each setting had a salad plate and a dinner plate, two forks on the left and a knife and spoon on the right. Wilma sat at the head of the table. Thomas’s talk of model airplanes had forced David to the far corner of the table, leaving Mía sandwiched between Aunt Jeanine, who resumed telling her about her ex-husband, and Kelly, who was beginning to slur her words.

The salad bowl was passed around. Once it completed the circle and was passed back to Wilma, David cleared his throat.

“I have some fantastic news, actually,” David said, interrupting the sounds of forks stabbing against plates. Some lifted their eyes to David’s face, while the others kept their eyes on their salad. David was smiling in a humble, affectionate way, like he was looking back on a memory. “Mía and I have decided what we want to do with the rest of our lives.”

Wilma set her fork down. Everyone’s eyes were now on David.

“We’re getting married,” David directed his gaze toward the head of the table. Wilma looked ahead at the salad bowl.

Mía felt blood rush from her head to the bottoms of her feet. Wilma looked down at her plate before standing up, grabbing the salad bowl, and walking back into the kitchen.

Debbie was scraping her bread against the plate in an attempt to get every drop of leftover salad dressing. Before putting the last bite in her mouth she said, “How long have you two been together?”

David answered, “Over a year.”

Thomas served his wife another slice of bread. “Well, you guys make a beautiful couple.”

Aunt Jeanine took another sip of white wine. “Young love is so fun.”

Like taking a pulse, Mía could feel the room around her waiting for the next movement, trying to see if they would make it, if she would make it. At least make it to dessert.

The sound of oil heating in a pan, sizzling, popping, filled the silence. Wilma called from the kitchen, “Mía, dear, would you come here a moment?”

There was a heat in Mía’s chest, like an incinerator had turned on beneath her collarbones. She placed her napkin on the table and walked to the kitchen as commanded.

On the counter, eight raw steaks were lined up, one right after the other. Clumps of salt and whole peppercorns were piled next to each one of them. The ruby-colored flesh sat there, cold, anticipatory, listening. Wilma took each pile of peppercorns, put them in a mortar, and began rotating her wrist and grinding them with a pestle. They crunched under the weight of her hand, blistered, and opened under the pressure of the stone.

“So tell me more about your parents, Mía. What are they like?”

Wilma’s hand kept pressing and rotating. “Do they speak English?”

“Do you find it hard? Adjusting?”

“To the American lifestyle.”

Wilma dumped the crushed peppercorns into a small white bowl. She sprinkled black and white dust on each of the jewel-toned, bloody slabs.

“You’re going to marry my son,” Wilma made it to the end of the line of meat. She patted the last steak twice, like patting a baby’s bottom.

Wilma took the last steak and held it in her hands. Her fingers squeezed the sides of it, like squeezing the water out of a dish rag. Mía and Wilma could hear the chatter pick up in the dining room. Wilma let the steak drop to her feet. It slapped against the hardwood floor.

“Pick it up,” Wilma said, looking at Mía one last time before she began salting the other slabs of meat.

Adriana DeNoble is a young American writer living in Rome, Italy. She has studied fiction writing at both Columbia University and University of Oxford. You can find more of her writing on Thought Catalog, 805 Literary Magazine, Gasher! Magazine, and in the print anthology, A Number of Letters.